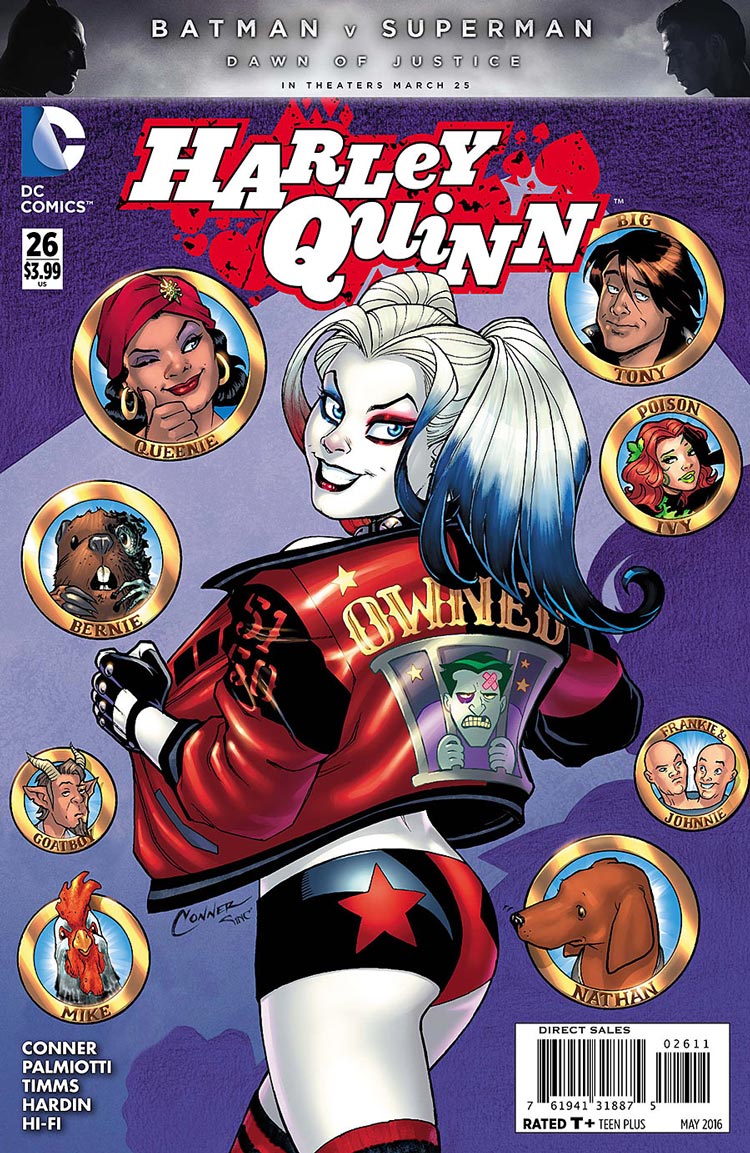 Despite a brand new lease on life following last issue’s showdown with the Joker, Harley gets a reminder that life’s a beach when she looks to make time for herself.

The action picks up more or less the moment after the previous issue ended, with Harley fast asleep and dreaming on the train ride between Gotham and New York. The sequence is a delightfully surreal dream casting Harley as Little Red Riding Hood and the Joker as the wolf that would make Angela Carter proud. Despite the whimsy and the kangaroo decked out in Harley’s roller derby gear symbolizing her romantic feelings for Wonder Woman, it’s a powerful reminder that the Joker has had an impact in her life that will take more than a prison beatdown to exorcise completely.

For the most part, this issue is about affirming the decisions that Conner and Palmiotti have made over the last arc and as such reads very much like an act of self care Harley style, starting off with a vicious fight against some tough guys on the beach that results in tearing both a mohawk and a pair of stretched lobes off the offenders. She does get a few precious moments of feeling the sand between her toes, but that gets interrupted again by a leering guy with a metal detector who makes an unwelcome comment about her butt as she walks by.

What follows is the kind of irreverent — dare I say cheeky — takes on sexual mores that are one of the book’s hallmarks and the strongest figurative work from series regular artist John Timms so far. There’s a long and very easily traceable history of engaging with sexual objectification in clever ways in Conner and Palmiotti’s collaborations going back at least as far as The Pro (which Conner penciled and Palmiotti inked), but there’s a fresh level of subtlety and nuance in this particular sequence scripted for Timms.

Conner’s fairly notorious for taking normatively sexy poses and grunging them up to mitigate the objectifying gaze in a way that forces the viewer to reconcile the sexy parts of female bodies with the gross things that all bodies do, and that spirit lives on here in a new presentation that weaves together the perfectly reasonable activity of looking at butts in art and the realities of street harassment.

Timms makes the reader complicit in the harassment by presenting the incident from the man’s viewpoint when he makes the comment and returns to it when Harley points her finger at him, lecturing him on the difference between looking at it and offering unwanted commentary in public. The sequence provides us with a somewhat rare unmitigated view of Harley as the object, but the price of admission is a dialogue about the boundaries that ought to come along with it. It’s fun to analyze these things from the perspective of craft and dissect how the reader’s gaze is manipulated by the art, but it also hits home in a very real way.

Right after I got my copy of the issue, I had a conversation with a friend who’d had an awful day with the final straw being a pair of guys walking past her talking about her butt as if she was a mannequin, prompting her to chew them out. I put the issue in her hands and we had a good laugh about it. Clever art is great, but what elevates Harley Quinn is that the creative team is dedicated to making it relevant to the daily lives of its female readers in a way that no other comic on the stands can match.

The thread running through the whole issue is the theme of giving the readers what they want, but not necessarily in the way they’d expect or ask for. As alluded to in my review of #25, this issue features Harley adopting her dip dye look from the upcoming Suicide Squad movie, a sequence that’s actually fully scripted out as another calming moment of self care, with the important caveat that this particular act of synergy is where the film’s influence on the comic begins and ends by replacing the “Property of The Joker” graphic on the back of Margot Robbie’s jacket with one of the Joker behind bars with “OWNED” in loud carnival script.

What more could any Harley fan want? Well, everyone and their butt-sniffing dog has been making noise about a cross company Harley Quinn/Deadpool crossover with both characters at the apex of their popularity with major films giving them both unprecedented media exposure. While Deadpool isn’t really in the issue, he sure is in spirit. One of Conner and Palmiotti’s most rewarding storytelling quirks is the way they build up their best parodies stealthily, leading the readers by the nose through something they know is going to be making fun of another comic, but isn’t fully apparent until the payoff.

Until now, the real standout example was the extended lampooning of Marvel’s Inhuman and cosmic characters culminating in a Thanos parody named Manos (made all the sweeter by the fact that John Timms worked on one of the Inhumans-based Secret Wars tie-ins shortly after drawing an amalgam of Blackbolt and Lockjaw as a giant pug who ate the Medusa analogue).

This time around we get the story of a grizzled ex soldier with the initials W.W. undergoing radical surgery that left him unable to feel pain. For reasons that aren’t really explained and don’t particularly need to be, he hunts down Harley for a one on one roller derby deathmatch, showing up at the track wearing a red and black costume going by the name “The Red Tool.” It may not actually be Deadpool, but it hardly seems to matter considering how thoroughly he’s lampooned and the fact that Palmiotti has written Yer Actual Deadpool to great success meaning when the actual battle kicks off next issue, it’ll be in as authentic of a voice for the character as anything you’ll see in a Marvel comic.

All in all it’s a pitch perfect example of what makes this series so beloved, but it more or less belongs to John Timms, who attacks this issue with renewed energy. I’ve always appreciated his contributions for bringing out the most kinetic moments in the series, but there’s a deeper, more considered approach to how he poses and abstracts the human figure than anything I can immediately recall.

The way that Harley leans in to get right into her catcaller’s face is a great example, but he also puts his style to use in depicting body diversity in a novel way in a change room scene at the roller derby track by placing emphasis on the hip bones of one of the slimmer skaters while giving a less conventionally feminine character a broader, muscular frame. It’s a small but welcome thing to see cartooning specifically meant to draw out the personality of the characters through their bodies beyond facial expressions. Good cartooning has energy and an identity of its own. Great cartooning conveys story and character in novel ways.

Last issue was a watershed moment for the character that anyone with a passing knowledge of Harley could participate on equal terms, and following that up is the perfect entry point for anyone who was still fence sitting.