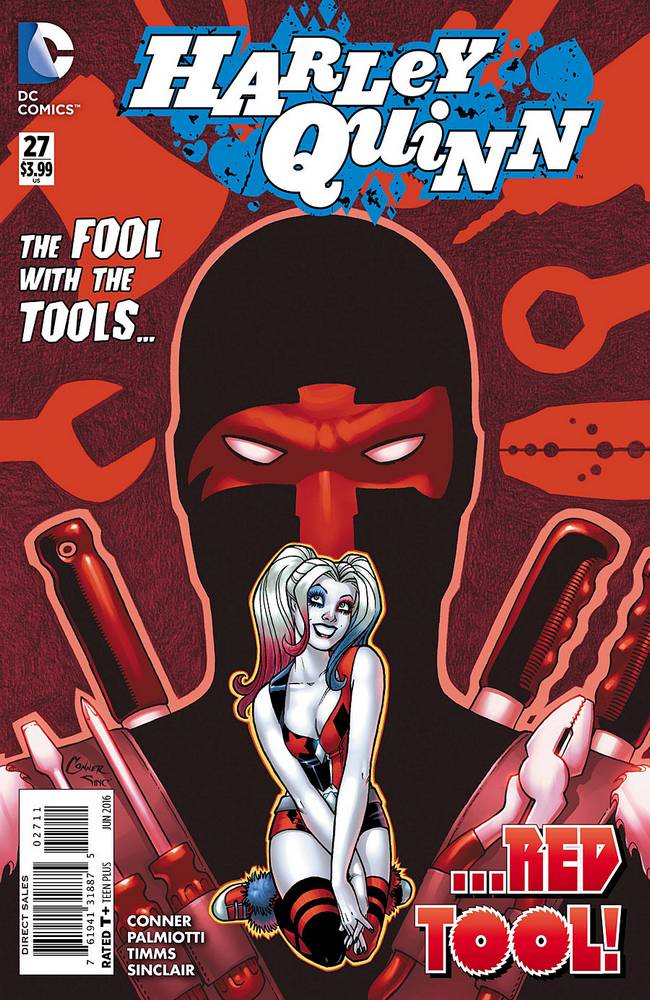 The crossover of the decade is finally here, well sort of. If you look at Harley’s new nemesis Red Tool too long you’ll fall right into a moebius strip of the wildest mix of homage, parody, and plagiarism superhero comics has to offer, which is a pretty big claim, I know. Red Tool kinda rhymes with Deadpool, which is who the creative team is clearly lambasting here, but Harley’s opposite number at the Haus of Maus was a stiff upper lipped swipe of DC’s Deathstroke before he was a fourth wall breaking self parody cottage industry, so there’s a fun kind of circular logic in play here. Time, as Matthew McConaughey once taught us, is a flat circle.

The most exciting thing about Red Tool’s emergence and this issue in particular is that it actually proves to be advantageous to use a parody of Deadpool speaking in a pitch perfect voice than it would to have the end all be all cross company team up of the decade. You’d probably clear 100k in direct market orders pretty easily with an event like that, but with all the back and forth between companies protecting their most valuable assets, the story is gonna fall victim to what wrestling fans call 50/50 booking. Both characters are going to have to come out looking strong and the whole thing will be about the novelty.

Instead, Palmiotti and Conner are freed from the restrictions of writing yer actual Deadpool to deliver Red Tool as being explicitly coded as the villain of the piece. As much as anti-heroes are talked up as being allowed to do the things that villains do, there’s still, for the most part, a fence put up around them to maintain the sympathy of the reader. Our gal Harley will do some gruesomely violent things that Batman does not approve of, but she adheres to a quasi-feminist moral code in line with the mores of 70s grindhouse cinema. Likewise, Deadpool is, last time I checked, usually portrayed as adopting a cheerily nihilistic outlook as a mask for deep pathos.

So what we get in the Red Tool is a throwback to a sharper edged Deadpool a lot more reminiscent of Joe Kelly’s time on the character than anything in recent memory or, if you’re feeling less imaginative, a version of Conner and Palmiotti’s Deathstroke who gussies up his amorality with cartoon hijinks and self deprecating humor. Refer back to Matthew McConaughey cutting stick figures out of a beer can as needed.

Red Tool’s appearance is a lot more than just a backdoor opportunity for Palmiotti and Conner to write Deadpool and get a cheque from DC while doing it, though. Coming off the back of the heaviest arc of the series so far, they needed something to re-energize the title and keep the momentum going now that we’re well into the third year of the run. Freeing Harley from the Joker was a big undertaking and a tempting exit point, so maintaining that particular element of the status quo means establishing an effective rogue’s gallery for Harley to call her own.

Like any good foil, Red Tool is there to tell us what Harley pointedly is not, but he also functions as a spectacularly effective foil for The Joker. As the last two years have gone to great pains to teach us, The Joker really isn’t all that much more than the superhero version of an overstepping daddy dom, the Christian Grey of the fetish set, of whom there are many in real life. What Red Tool sets out to do is show us the other side of the coin: The Nice Guy. It’s all structured around the antics and peculiar moral structures of superhero comics, but at the end of the day, The Red Tool is out there trying to get Harley’s attention and woo her by any means necessary, manifested most clearly by kidnapping her into a date on the Wonder Wheel, and at the issue’s close, arranging a wedding. It all fits very neatly within the series’ ongoing discourse around consent and abusive relationship dynamics while keeping a breezy, upbeat tone.

John Timms is the ideal artist for the issue as he stands out as the contributor who does the best with slapstick humor and dynamic movement in fight scenes, but it’s letterer Dave Sharpe who takes center stage this issue with the hammers, saws, and screws that he alternates between for Red Tool’s dialogue, taking the quirk of Deadpool’s red font in yellow bubbles to brand new heights and paying careful attention to how they fit on the page. In some cases, that means restricting the variety to a series of three buzzsaw blades, but elsewhere he manages to stack a pair of hacksaws onto a buzzsaw and a claw hammer without sacrificing readability.

Bringing in a Deadpool parody is a great way to pique interest, but make no mistake, Team Harley Quinn are building towards the future just as relentlessly as they did on day one.