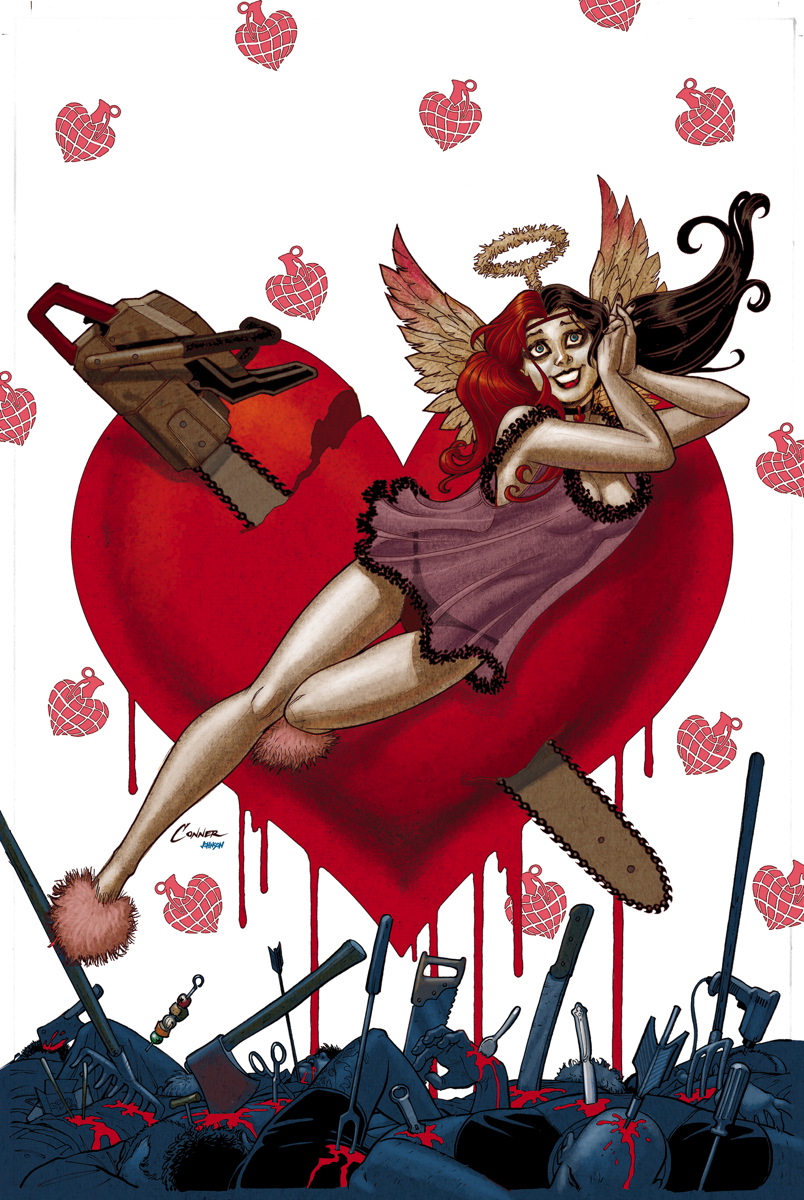 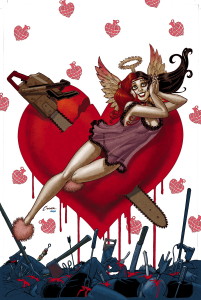 Love is literally in the air, as Harley Quinn embarks on a night out solo and soon becomes an object of affection for dozens of suitors — suitors who want nothing more than to love her to death! It’s Valentine’s Day, and never has the hardware store been so romantic. And by romantic, I mean hilariously and gruesomely violent!

Conner and Palmiotti continue to deliver a complete departure from the overriding seriousness of the comic market with Harley Quinn, and it’s no surprise the title is remaining at the very top of the sales charts. Like Green Arrow, and Hawkeye and FF across the street, it’s a bit of a boutique title for DC, standing apart from its fleet of books by giving us something completely different than we’ve seen so far in the New 52 — and as a bonus, it’s just so damn funny. Recurring jokes, meta commentary, and just plain crazy situation comedy are packed into every page, practically overflowing the panels, and there’s no sign that the writers are letting up any time soon. I’m starting to imagine the actual circumstances under which Amanda and Jimmy must write an issue’s fill of jokes, and it boggles my mind how they can do it without becoming as mad as Harley reportedly is.

But, interestingly enough, we’re not getting all-out crazy Harley in this book, but a much more well-rounded woman — thoughtful and determined — who just happens to dress like a clown and kill people sometimes. Her loneliness, particularly in this issue dedicated to the day of love many of us like to avoid, is meaningful, as is her laughter, giving us a fun lead character that can pull at our heartstrings as easily as our funny bones. And to deliver that kind of well-rounded characterization in each single-issue story, where Harley is mostly in monologue (stuffed beavers excluded) is a pretty fantastic feat.

Chad Hardin and Alex Sinclair on art and colors have a lot to do with the extent of empathy we experience as well, with Harley popping off the page in dramatic fashion without ever losing the subtlety of her facial expression and body language. There’s something of a unique quality to the finishes on this book — and I’m not sure who to credit — where a muted sketchiness is just barely left behind after stronger inks are laid down. It’s really unique and I’ve grown super fond of it. It seems to reinforce Harley’s softer side without losing sight that she’s often still just a girl with a submachine gun ready to take your head off. It seems Harley chose well in her zero issue among the many beautiful options!

Another fantastic issue from a team that’s just producing the right kind of synergy, Harley Quinn is the book I didn’t know I wanted or needed, but in retrospect, I can’t believe we could live without. I’d hate to see its formula duplicated, but I’d love to see more chances like this one taken. It’s clearly paid off.