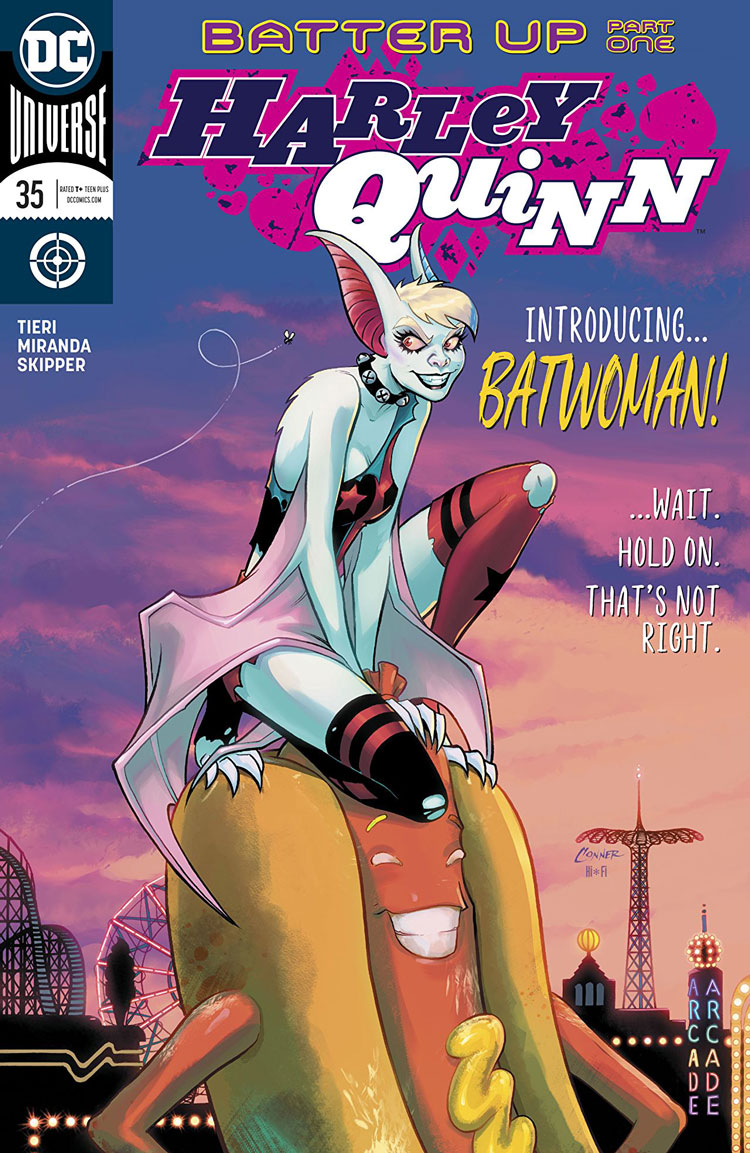 It’s a new era for the quirky Harley Quinn in comics due to a new writer on the wildly popular publication — Frank Tieri. Earlier this month, powerhouse creative team Jimmy Palmiotti and Amanda Conner ended their 64+ issue long run on Harley beginning in The New 52. And now, Tieri and artist Inaki Miranda set the tone for their Harley with part one of the arc “Batter Up”, which from the looks of this comic is becoming a real home run for fans of the bubbly bombshell.

Tieri, who is familiar with Harley’s crazy antics while on the series Harley Quinn and Her Gang of Harleys, uses the familiar setting of Coney Island to start this story with the apparent kidnapping of one of Harley’s friends. When Harley hears from people on the boardwalk that her friend was taken by a huge bat creature, she begins looking for clues to see if this creature actually exists.

There’s no coincidence Harley’s friends make a joke here and there about Quinn acting more and more like Gotham City’s Batman. While Tieri writes this protagonist with humor and a right hook as solid as the baseball bat she wields — by now, expected of this character by readers — there’s a sense of sweet concern for her friend that makes Harley take on traits reminiscent of a detective. Tieri’s script has a great balance of mystery and surprisingly classic Batman mythology that pushes Harley Quinn’s narrative to wonderfully great heights.

The Joy and Tears of Miranda’s Harley

As veteran Harley Quinn artist Amanda Conner provides the cover to issue #35, a bubbly Quinn with bat-like features overlooking the carnival joys of Coney Island, readers open to Inaki Miranda’s art that develops Harley in a whole new light, literally and figuratively. While Dave Sharpe’s letters exude the same rowdiness from the Gang of Harleys and Jeremiah Skipper’s colors provide perfect pallete choices depending on the scene (whether bleak or educating), Miranda highlights Harley Quinn’s sadness — a theme in the issue due to recent events. The smudge of her black eye makeup balances with the light hues of blue and pink in her hair and “Daddy’s Li’l Monster” crop top.

As Tieri keeps humor in his writing, Miranda beautifully notes both this and the darkness in finding her kidnapped friend as well, particularly in the intimidating aesthetic of the iconic Arkham Asylum. Miranda’s art, much like Tieri’s narrative, provides the audience with an in depth look into Harley’s weariness while sustaining her warm and familiar soul.

For readers like myself that have been used to Palmiotti and Conner handling Harley Quinn with major enjoyment and success, Frank Tieri’s first part of “Batter Up” and the beginning of his run on the ongoing series is a refreshing take on the 25-year-old character that continues to get popular with each new comic. Tieri’s words coupled with Miranda’s art has me hyped to see how they will move forward with this story that is a definite crowd pleaser for fans of both the Batman and Harley.

A strong start to a new era for Harley Quinn.