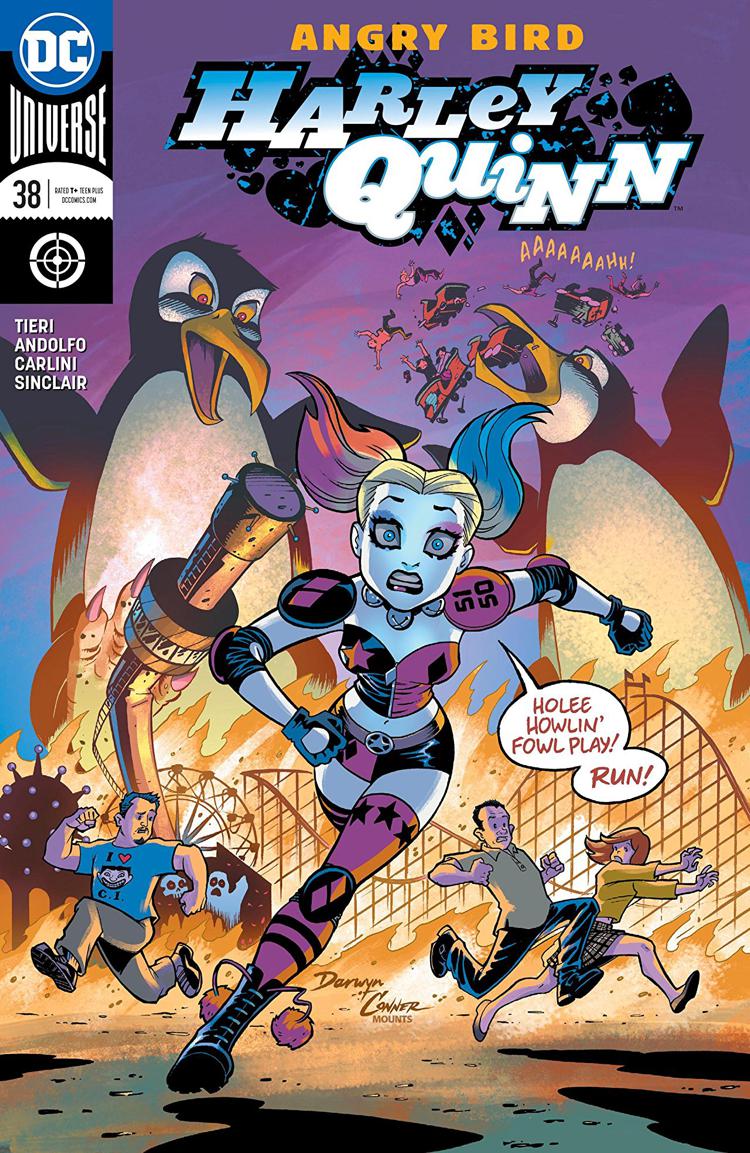 After a recent painful goodbye, it’s both relieving and cathartic to have our usual light-hearted story back and stronger than ever.

In recent issues, we’ve both laughed and cried with our clown princess of crime, and though there have been more tears than giggles as of late, it has been an incredible experience as we all heal together alongside Harley and her gang. After what can only be described as a very “realistic” process (this is still very much going on as it progresses from phase to phase) of grieving, we are finally getting the laughs we have become so accustomed to in Harley Quinn. Frank Tieri had some large, Palmiotti/Connor sized shoes to fill in writing the story, but has been absolutely nailing it. Being true to the characters yet also adding a fresh take is a difficult line to toe, but Tieri is making it look easy.

Another strong point is the more prominent use of Harley’s gang, of which has played a more supporting role in the past few issues. With it being one of the strongest examples of diversity in comics today, the gang of Harleys has become a beacon of hope. The importance of representation has been given a louder voice, and the gang is needed now more than ever. As if to answer that call, here they are.

The villains are the largest source for laughs in this issue, offering a unique and unexpected take on the term in general. Harley herself has stepped into a role that we have not seen on her before, and though it is indeed a disguise, it’s not the kind you are thinking. The gang is concerned for their leader, though there is no tangible “bad guy” to be defeated here. The real horror is something unseen. Something that lives inside the mind. Something all too real. Something we can all learn from.

The artistic detail is at an all time high. Always one of the strongest points in the praise of this title, the art here is breath-taking. Mirka Andolfo and guest artist Eleonora Carlini have shown us Harley and pals through a whole new lens. Alex Sinclair’s signature use of color keep us secure in the fact that these are the characters we know and love despite the new take on them- providing us with a one of a kind mixture of classic and contemporary. Also, the cover for this issue is one of the greatest in Harley history, a collaboration between Amanda Connor, Paul Mounts and the late, great, Darwyn Cooke.

To sum it up things are going extremely well at Harley Quinn headquarters, blessing us with some of the best in the business. Both the story and the art is thriving, and just as it always has, keeps us begging for more.