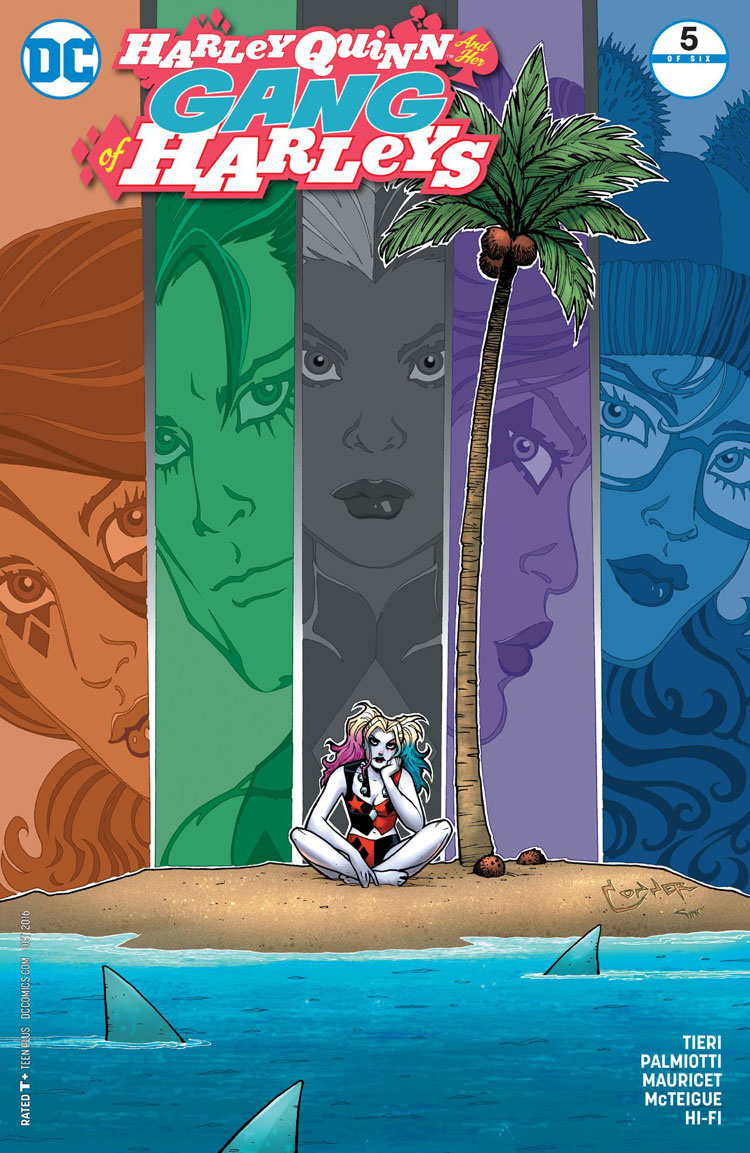 Man oh man has this series been a wild ride.

Anyone who thinks Harley’s solo title is random, quick-witted, and non-stop manic fun hasn’t seen anything yet. Harley Quinn’s rag-tag team of “wannabes” have really come into their own in this title, starting out as little more than background noise and becoming characters we truly care about.

Can we talk about the excellent use of diversity used here? Asian Harleys! Indian Harleys! Harleys of color! Oh, and not to mention a dude Harley, in a teeny-tiny little costume the likes of which we normally only see on the sexy lady characters. This book (along with the Harley Quinn solo title) has done wonderful, transcendent things that others in the industry couldn’t hurt to learn a thing or two from. Absolutely iconic work by Jimmy Palmiotti, Frank Tieri, and Amanda Connor.

But let’s dive into the good stuff, shall we? The “big bad” in “Harley Quinn and her gang of Harley’s” is known as “Harley Sinn” and in this issue we finally learn just what is driving her to conduct all this villainous insanity. Do you like stories where the villain has a reason for doing what they do? A reason that makes you feel something? Well then you’re in luck because that’s what you’re going to get here.

Terminator robot versions of well known superheroes? Rabid goats? tons and tons of and TONS of bombs? Yeah we’ve got those too. Don’t worry, it’ll make sense when you read it. You know, about as much sense as Harley Quinn comics ever do. Would we have it any other way, though?

The artwork is just as enchanting and enthralling as ever. The team of artists working on this issue (Mauricet, Inaki Miranda, Dawn Mctiegue, Ray McCarthy, and Mark Roslan) definitely had the opportunity to display their skills with all the different shenanigans taking place between Harley and friends. The art has much to do with how the story makes you feel.

When they want you to feel sad, you do. When you want you to feel happy or surprised, you do. That’s the power of incredible art. It’s much more than a few lines on a page, or a splash of color here and there. This artistic team is bubbling over with talent and every page is an absolute visual orgasm. It just wouldn’t be the same without it.

All in all, it’s amazing that despite this being one of three different Harley Quinn titles on the shelves right now, just how strong the storylines are in each one of them. Jimmy Palmiotti has a huge hand in creating and perfecting the independent and almost heroic version of Harley we know and love today. It’s a shame that this title has to end, but I have a feeling this story is going out with a bang. Or maybe the smash of a giant mallet. Or baseball bat. All in all when it comes to Harley Quinn, who could really predict?