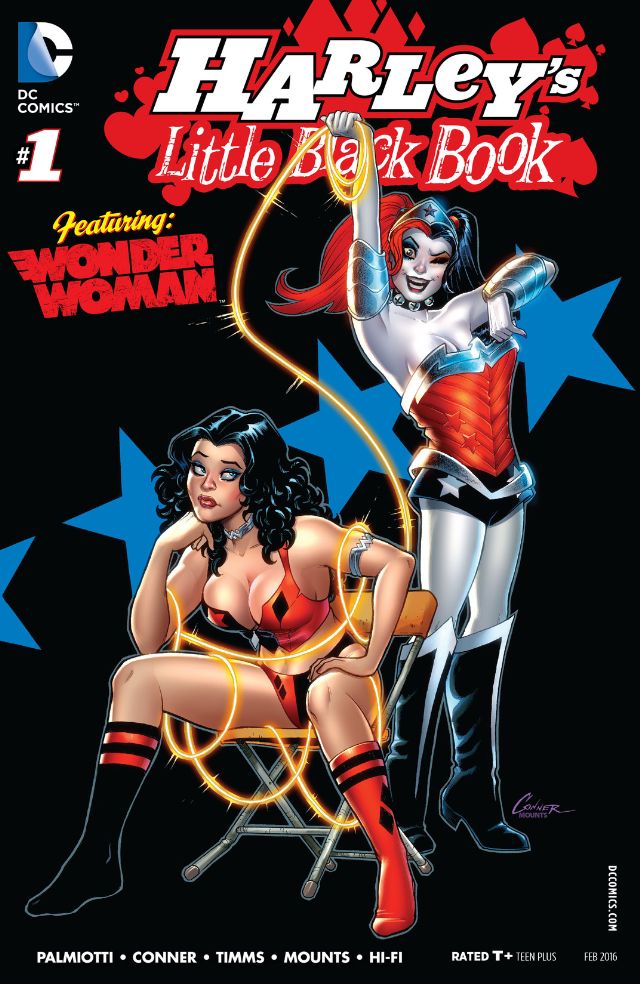 Harley’s gotten a hot tip: a British super-villain is about to embark on a plan to capture and kill Wonder Woman in her home city of London. And she’ll stop at nothing to ensure that her personal hero is safe — even if it involves taking over her identity and fighting the London Legion of Superheroes to do it! The who?

It’s interesting, but until I read this issue, I hadn’t realized that Harley Quinn had slowly become… a hero. I knew she wasn’t technically the same villain that cozied up with the Joker and set crazy traps for Batman and Robin. But somewhere along the line, maybe with the new gang of Harleys, Quinn has made the leap, and it’s… a little strange, frankly.

That’s where Harley’s Little Black Book begins, with Harley Quinn on a mission to save Wonder Woman across the ocean after foiling a heist on her own Jersey Shores. It’s interesting, because I adore what Palmiotti and Conner do here, in making Diana an early, if not misunderstood, focus of admiration for little Harleen. Because who among us DIDN’T grow up wanting to be Wonder Woman? Admit it. We all did. And Harley’s Wonder-Cave of bricabrac rivals my own “desk of Batgirl.” I can recognize the devotion. I feel you, Harley.

And to wit, the moments between DC Comics’ two iconic women are the best in the issue, because for as much as you’d think they were polar opposites, Diana has enough tolerance to meet Harley halfway and Harley has enough good intentions to warrant it. Amid the funny gags like clothes swapping and bullet bouncing, there’s a camaraderie here that’s fun and feels genuine — at least for Harley. And in true Conner-Palmiotti fashion, it’s really only Harley’s perspective that matters.

And to some degree that weighs down the rest of the issue. The London Legion didn’t have nearly enough interaction with Harley herself, and leaving this kind of extreme parody — without an outside “rational” (I use that word cautiously in this context) force to bounce off against — just makes for a lackluster joke.

Having pages of Amanda Conner pencils, however, is anything but lackluster, as the artist delivers a lot of fun, and a particularly strong focus on the differences between Harley and Diana. It’s not just bustlines that differ between the two women, but we definitely get from Conner a strong sense of scale in size and even age. Diana is every bit the Amazon in this issue, reminding me of classic Kirby renderings of Barda next to average humans. She towers over Harley, but never in a threatening way (despite the ridiculousness of Quinn’s strategies). And by comparison, we get a Harley who is far from dainty, but physically smaller, agile to be sure, but dare I say more innocent seeming than the worldly Justice Leaguer?

While the issue as a whole doesn’t quite have the level of background detail we’ve come to see in Harley’s series to date, it’s hard to top Conner’s expressiveness in faces and body types. No artist working today can give their female characters just self-ownership in any style of dress or undress as Conner can, and seeing that for Wonder Woman is, by the way, a HUGE breath of fresh air.

A fun first issue that pairs the most diametrically opposed leading ladies in comics — and makes it work — Harley’s Little Black Book is off to a great start. The rare treat these days that is Amanda Conner interior art makes this issue one that should jump off the shelf and into your hands. Here’s hoping future team-ups are as fulfilling as the first out of the gate.