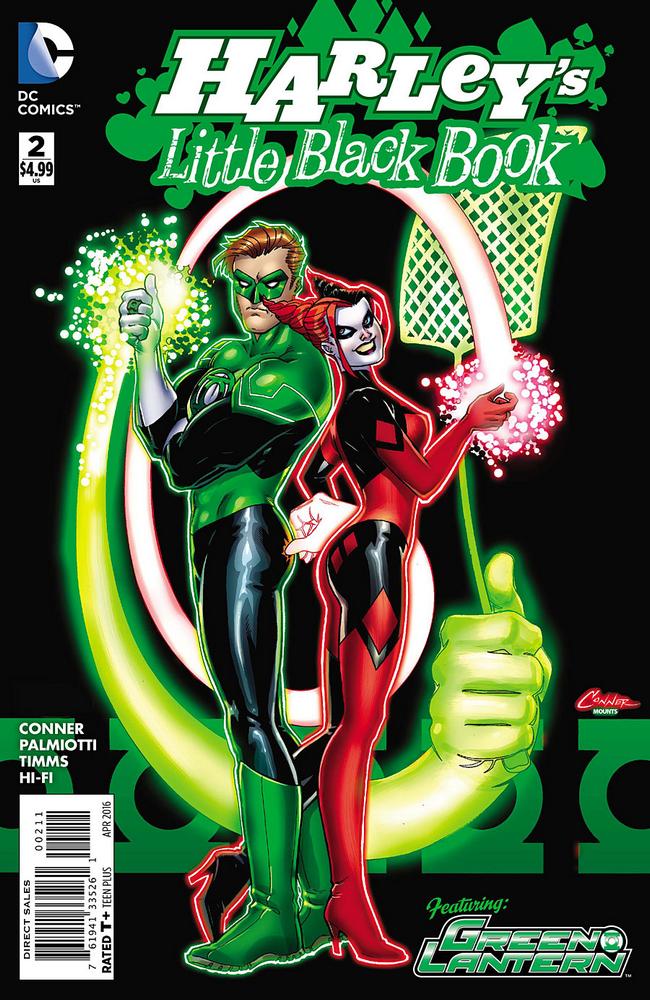 Harley lets her true colors show in her latest team up misadventure, which when it comes to the Lantern Corps, is a really, really bad thing.

Amanda Conner doing a full issue’s worth of interiors that featured Harley flirting with a statuesque, dark skinned Wonder Woman is a tough act to follow, so saying that the second issue doesn’t live up feels unfair, especially when Hal Jordan is next up to bat. On the bright side, Palmiotti and Conner have no illusions about what a tool he is and play up his laundry list of character defects in a way that razzes his fans (shocking that he has them, I know) while also throwing red meat to his detractors.

I know I’ll get heat for this (ha ha), but I’ve never understood Hal’s appeal, and I’m sure that getting the issue of Emerald Dawn II when Sinestro temporarily breaks him out of jail on a DUI rap as my first DC comic as a kid had something to do with it. But familiarity has only ever seemed to breed contempt for me with him. So far, my favorite Hal moment was when he went back in time to die again at the climax of Convergence, but I digress. My general outlook on him is that he’s the Bella Swan of the Corps: he’s a shallow wish fulfillment character who gets hit on the head and ends up in questionable relationships a lot. Lucky me, because that’s exactly what’s on tap.

The whole thing kicks off with a pair of friends on a camping trip who go out to investigate a crashed spaceship with a dying alien pilot who gives them a box to protect. This confused me for years, but Hal’s real, or well, more accepted origin isn’t training to be a space cop while serving a 90 day jail sentence. He was a downed fighter pilot in the Korean War who found it in a flight simulator. Or a test pilot who found a crashed spaceship in the California desert. They’ve tried a few things with him over the years.

Anyway, they’re lampshading the popular origin, which also provides some of the biggest laughs in the issue as the pair discuss what they would do if they met alien lifeforms, with one saying he’d have sex with them and the other giving a long winded explanation of why it’s an unlikely situation. They then go on to list off all the likely scenarios that could result from the downed spaceship before deciding to sell the rings they find online.

The rationale for selling them is pretty great; the rings are probably too dangerous to want to wear so they sell off the green one for several hundred thousand dollars and the red and black ones, which have since merged into one red and black ring, on the side for much less to Harley. Red and black may be Harley’s colors, but they’re also the rings powered by anger and death, making her both incredibly powerful and indiscriminately violent.

This eventually attracts the attention of Hal Jordan who has been busy getting hit on the head and hitting on a Russian test pilot who urges discretion while Jordan is blissfully unaware that his helmet mic is on, broadcasting their conversation about sleeping together the night before to the entire control tower. To Conner and Palmiotti’s credit, it’s Hal who’s made out to be the bimbo in the scenario, nice to look at but not much else going on, which is the key driver for his portrayal throughout.

Oddly enough this issue plays a lot more to Green Lantern lore and in-jokes than it does to Harley’s base, but I’m not sure that Hal fans will be coming to this title in droves given that they seem to skew older and tend to come with stiffer upper lips. Last issue focused on Harley’s infatuation with Wonder Woman and just how far back the roots of it go, but there’s not really much for her going on this issue other than compulsive online shopping gone wrong. She effectively takes on Carol Ferris’ typical role (I have no idea why I know so much about characters I’m lukewarm about) of going rogue and dominating Hal, which is a good look for her.

The red and black fusion ring is a neat trick that I’m sure will send pedants up one wall and down the other (I’ve never seen more “citation needed” markers on a single Wikipedia page than I have on his page), but it seems like a bit of a missed opportunity to portray Harley as a Star Sapphire given how much of her characterization revolves around bad romantic choices and near constant infatuation. A queer polyamorous abuse survivor as a Star Sapphire would strike one hell of a blow for that mythos, given that they typically pine after a single lost love.

The art is provided by a tag team of Harley Quinn mainstays John Timms and Mauricet, who certainly do well, but leave the impression that the issue could have fared just as easily as a one or two issue filler arc in the main title as opposed to a special, unlike the Wonder Woman issue that felt like a real treat due to the rarity of Conner interiors. With that said, the Lantern battle is where Timms comes out to shine, showing the same gifts for the cosmic end of things that he delivered with the unforgettable Guardians of the Galaxy parody in the Power Girl issues of the main title.

Mauricet is somewhat underutilized to deliver the gang that Harley befriended in London last issue in their quest to get to Coney Island and take her up on her offer of letting them crash with her, but it buys Timms the space to deliver his best work on the lantern brawl. Something that I’ve really appreciated about the Harley Quinn titles is that Conner and Palmiotti haven’t been shy about bringing on guest artists to share the load for elaborate sequences.

The specials have been jam packed with a diverse crew of artists, but there’s evidence of real care in the main title when switching artists for the major set pieces of Harley’s fantasy dream sequences. With Marvel having moved to double shipping on several titles following Secret Wars and persistent rumors of DC following suit, it’s critically important that the Harley Quinn books have established healthy workloads for their contributors so that they can deliver a consistent product that allows them to showcase their best work.

Standing on its own, this is a tough issue to justify a separate purchase outside the main title for folks on tight budgets, but it’s a fun romp that sits easily beside the most entertaining issues of the main title. If push comes to shove, I’d skip this one for the promise of Zatanna next issue, which is a surefire hit, but this is the most fun I’ve ever had reading a Hal Jordan appearance that he didn’t die in.