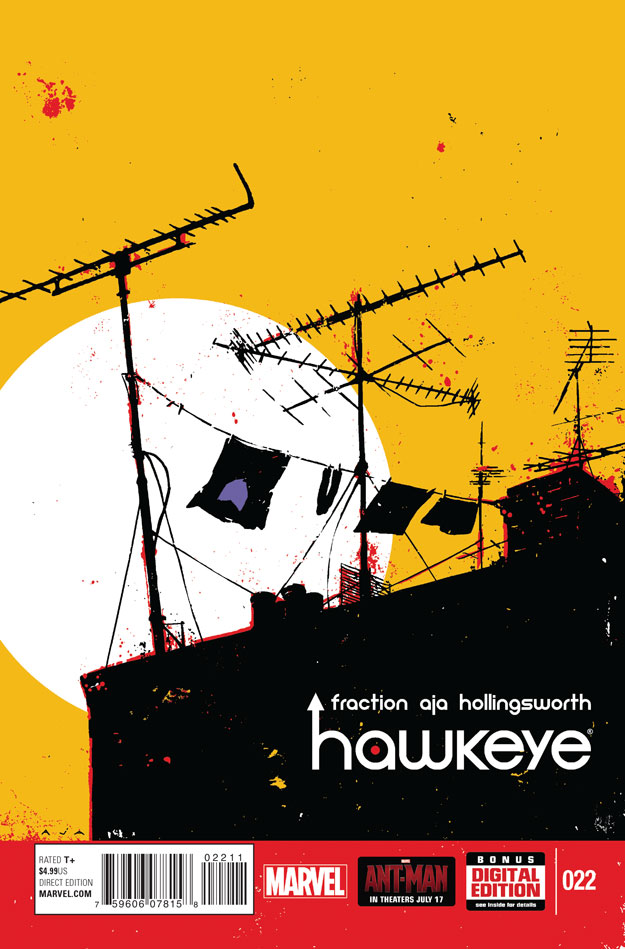 We tried to pretend that this day would never come, and with some help from a variety of setbacks and delays we created a fantasy world where everything was beautiful and Hawkeye would never have to end. Now those days are over and mark my words, there will be tears. Rolling out like a western, Issue #22 is a perfect, but bittersweet ending to a series that meant so much, to so many. If it feels like the end of something important, believe that it is, and if you’re not sure that you’re ready to let go, know that you are not alone.

The conclusion to the battle of Bed-Stuy relies on actions more than words to tell the story. A lot of those actions are punches but one them involves a collar stay and you’ll forgive me saying it’s just the coolest because it’s also a reminder of who Clint is when he’s not not being a superhero. It’s a small detail but at one point Clint remarks ‘I am right way more than people give me credit for’ and its true because while playing dumb allows you to better size up your opponents, Clint has proved time and time again that he is smart, resourceful, and the best at what he does.

The same can be said for Kate, who turns up midfight and barely bats an eyelid. Rarely sharing a scene, Clint and Kate are put into situations that require they question their character and while the come up with the same outcome, reminding readers why these two are even friends in the first place, the consequences are vastly different. In that moment Clint and Kate are two sides of the same coin and both undeniably Hawkeye. Tying up all but one loose end, Matt Fraction leaves our heroes reunited and most importantly, in one piece.

Issue #22 is fairly light on dialogue and as a result the art work is more important than ever to convey the story. David Aja’s use of symmetry and motion to direct the reader’s eye and carry the parts of the story that lack dialogue are incredible. The framing is cinematic and culminates in a very movie credit like final page and the use of silhouette creates drama but also saves us from the more violent or shocking aspects of the fight.

There is also a lot of attention paid to facial expressions, which are especially important when considering not only the limited dialogue but also the fact the Clint is partially deaf. He does not always have the luxury of understanding what is said and Aja is careful to ensure that the reader never forget, and why should we? He doesn’t get to, it’s not something that can or should be just brushed under the carpet whenever it suits. As such we are given close ups of his hearing aid, a few instances of sign language, and the empty speech bubbles where he just can’t hear. Matt Hollingsworth’s use of a limited palette and flat colours is incredibly effective in creating a pulpy feel that is in keeping with the tone of the story while continuing to echo the aspects of symmetry that are present in the art.

Understand that when I say that this feels like the end of something important, that I am not messing around. I am seriously emotionally invested in this book. I have cosplayed Hawkeye. I have stealth cosplayed a whole summer wardrobe based on Kate’s L.A Woman aesthetic. I plan to get a Hawkeye tattoo. I relate to these characters on a base level for a number of reasons but most prominently because they are like me.

You see, the thing about Clint Barton, is that he’s kind of a train wreck but he know that and he’s trying to be better and the thing about Kate is that, while on a vastly different scale, she is exactly the same. Over the last 22 issues Matt Fraction, David Aja, Annie Wu, and Matt Hollingsworth didn’t give me one character I could relate to, he gave me two. Two nuanced, messed up, stubborn, brilliant, honest, authentic depictions of humanity and I am incredibly grateful.

Issue #22 is a wonderful, heart-breaking, tear-inducing ending to the one book I didn’t want to end. If you’ve yet to indulge, what better time to start. I honestly can’t recommend Hawkeye highly enough because even though in reality, this has nothing to do with me, sharing it is a little bit like sharing a piece of myself.