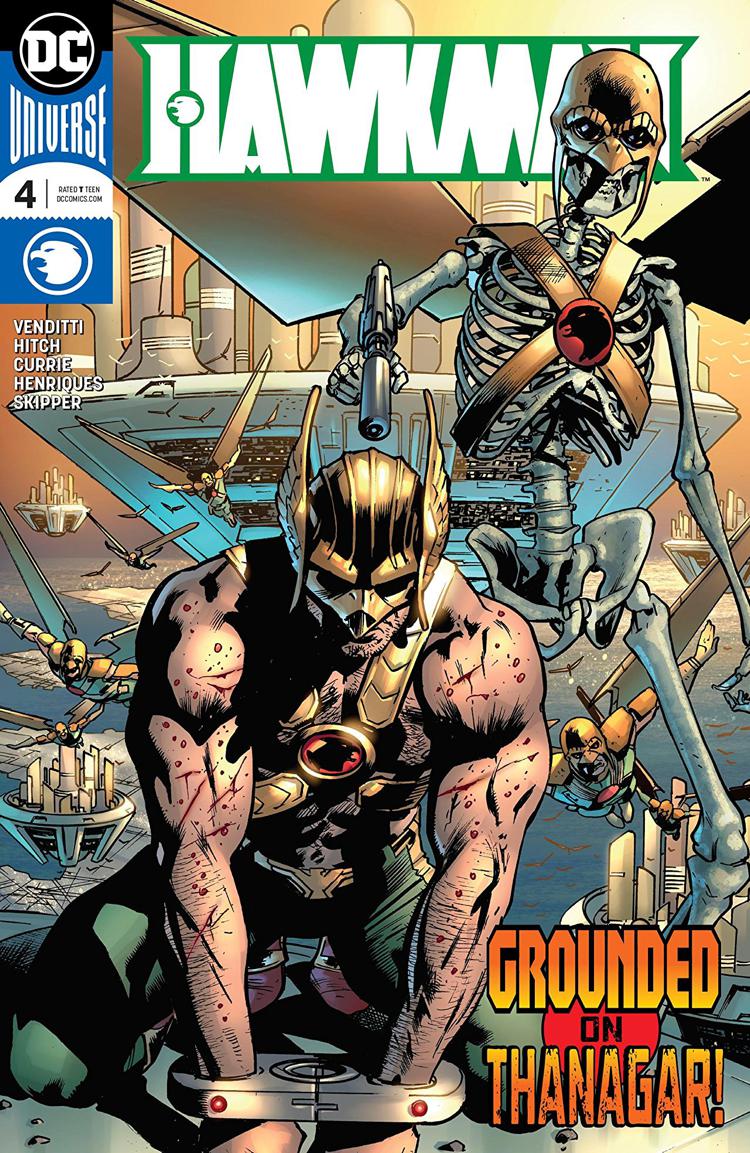 Carter confronts another one of his selves, this time the space cop Katar Hol of Thanagar in his quest to discover the purpose for which he keeps regenerating.

Hawkman #4 continues the story of Hawkman’s journey to uncover his past and the meaning of his existence. This issue gives us a glimpse of the terrifying, genocidal hawk-shaped god-machines as they destroy a far-off planet in search of the Great Betrayer, adding weight to Carter’s quest to find a means of fighting these omnipotent destroyers. We’re then plunged straight into a chase, as Carter Hall (the iteration of Hawkman we’re following in this comic) runs away from Katar Hol, the version of Hawkman who was a cop on an alien world and was the subject of the Hawkworld ongoing series in the early 90s.

If that feels confusing, I can vouch that it isn’t, at least from my standpoint. Here I have to pause and give what limited hawk-credentials I have, and hopefully you’ll be able to judge from there how likely you are to find this comic frustrating. I’ve only read some Silver Age Hawkman comics, and I’m aware that there was a lengthy period in the 80s and 90s when Hawkman’s continuity was deeply confusing, as he was alternately presented as both a police officer on a fascist alien world and as an archeologist superhero on present-day Earth. I have a generalized sense that this confusion was resolved, somewhat, by the 2002 Hawkman series, which explained that Hawkman had been reincarnated dozens of times in different eras and on different planets. So, there’ve been a bunch of different Hawkmen, and every time he dies he comes back as a different one.

Having said all of that: I’ve found this current Hawkman series to be a breeze to follow. A lot of what I talked about above is explained explicitly in the pages of the comic. I’m no hawk-expert, but I’ve found this to be a relatively painless way to introduce myself to the hawk mythos. It walks through and acknowledges various past versions of Hawkman, giving the old hawk-fan a chance to revisit old friends, while keeping the focus of the story on Carter himself and his quest and keeping the hawk-snarl as simplified as possible. It’s ensconced in continuity, but without being intimidating about it.

But what if you don’t care about hawk continuity? In that case, this series does a reasonable job of both presenting some well-constructed setpiece action scenes and presenting you with a fairly likeable version of Carter Hall. There’s a tendency, and it’s not an unreasonable one, for people to see Hawkman as a bit of a boring character. He has, historically, been the stodgy, humorless stick-in-the-mud on teams, and he’s generally the more straight-laced partner when paired up with Hawkgirl. This series seems to present a somewhat revised Carter Hall. The emphasis so far has been on Hawkman as an adventurer, a likeable Indiana Jones type, but with wings and no shirt. The result is an action-heavy book with a decently charismatic lead that’s fun to read.

The downside, thus far, is that it’s fairly formulaic. Carter goes to an exotic locale, he’s assisted by a friendly local (with whom he has some history that has resulted in said local owing him a favor), he fights a battle, sometimes with a monster, sometimes with a past version of himself, and then he acquires an artifact that serves as a pointer to the next location in the scavenger hunt. Wash, rinse, repeat. In its defense, this formula is evocative of the sort of serialized adventure stories that inspired Indiana Jones; you could lift the format from Commando Cody or Buck Rogers and find it quite similar to what’s used here. That’s nice, and a cute adaptation of the form from one serial medium to another, but it doesn’t make each issue feel any less repetitious, and by this fourth issue the formula’s already getting a bit stale.

Still, the creative team is doing something interesting with all the fights Carter’s getting into; he’s running, bit by bit, through various foes of his past and previous versions of himself, and next issue promises a classic Silver Age team-up. There’s an interesting parallelism in seeing Hawkman run through his entire comic book history as he, within the universe, seeks the meaning of his past. Whether this exploration will resolve in a narratively or thematically interesting way is still, alas, yet to be seen by this fourth issue, but the prospect yet remains.

In the meantime, we can enjoy the lush artwork in this issue. It’s always important that Hawkman, in whatever version he may be, be presented as perfect muscular specimen, and the art team on this book delivers it in spades, whether it’s splash pages of Carter and Katar in flight or close-ups of Carter flexing his sinewy muscles as her prepares to smash his mace at his foe. The centerpiece of this issue is the aerial chase through Thanagar, which is depicted here as a breathtaking floating city over a Blade Runner-esque science fiction dystopia. The coloring is lively, particularly when Carter leads his past self out of the downside and we see beams of light breaking through the skyscrapers. All told the art serves the action admirably, and the action is the ultimate point of the enterprise.

Hawkman #4 is a gorgeous book, in keeping with the formula established by the previous three issues, and is a fun, brisk read that serves as a new reader’s tour through Hawkman’s history.