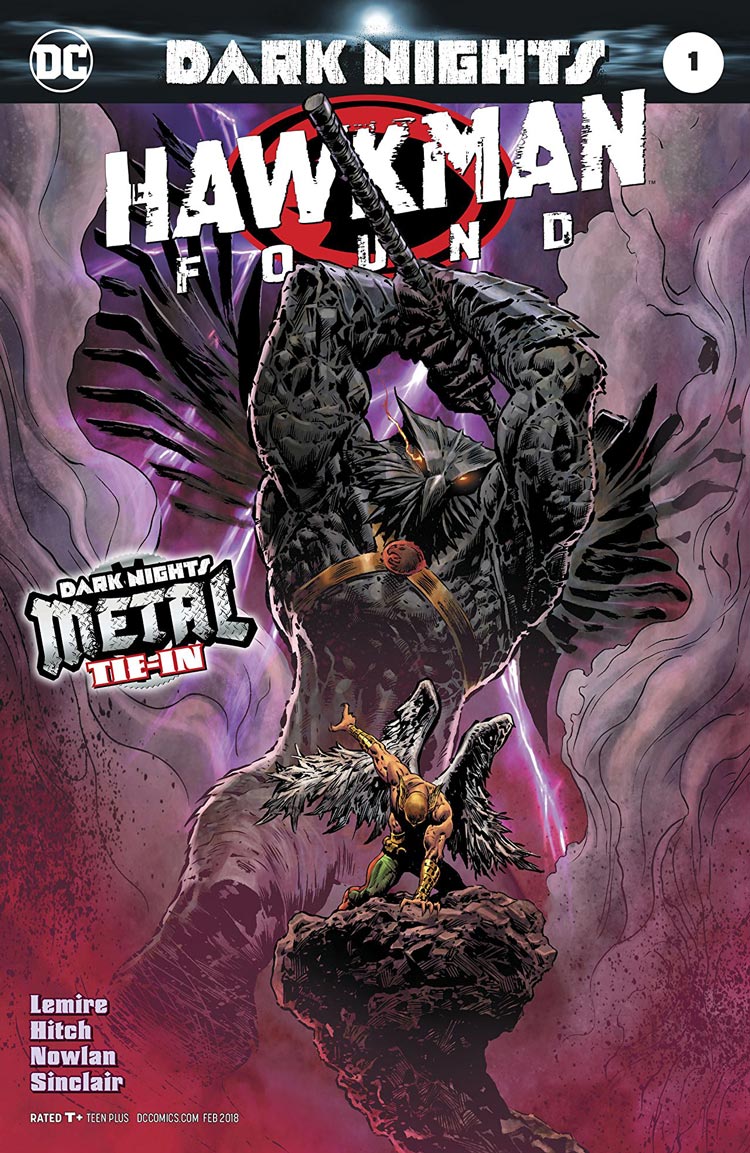 Threatening to be lost amidst all the other Dark Nights: Metal goings-on, Hawkman makes an appearance in this one-shot, both to tie-in to the main tale and to set the stage for possibilities to come. Hawkman Found #1 is written by Jeff Lemire, drawn by Bryan Hitch, inked by Kevin Nowlan, colored by the tag-team of Alex Sinclair and Jeremiah Skipper, and lettered by Clayton Cowles.

Told first-person, through caption boxes in mixed case lettering, Hawkman Found #1 dips into the world Carter Hall/Khufu/Katar Hol exists in between lives. This is the story of his escape, his attempt to leave the realm, to start his next life, to resume his adventure.

Lemire sets the story up as part action-adventure and part mystery. Readers don’t know (at least from this one-shot) why Carter Hall is here, how he got here, or truly where he is trying to go to or why. Through the course of Hawkman Found, we see some of the lives past, including Khufu and the Silent Knight, and we’re reminded of the threat of the Manhawks, one that Lemire and artist Bryan Hitch have updated for this issue.

That’s really the crux of Hawkman Found #1 – updating and reminding. This could easily be a standalone released during the Rebirth flurry of 2016, or the first issue of a new series. As it stands, this is, essentially, Dark Nights: Metal #4.5 (or #4.25), as it ends with a note similar to the final panel of Metal #4.

Hall’s determination and ingenuity are at the heart of this issue, and Lemire does a nice job of making Carter Hall a relatable, likeable character who you find yourself cheering for, and struggling alongside. Make no mistake, though, this is Carter Hall’s tale, as Kendra (Saunders) is mentioned, but not Shiera (or Shayera). I would love to see a companion piece to this issue that depicts Shiera’s parallel journey, but for now, I’m thrilled the winged warrior is getting some paper and staples dedicated to his adventures in the midst of a major event story.

Hitch and inker Kevin Nowlan deliver the grit necessary for a story set in the ravaged wastelands of life between lives. Carter Hall is strong and heroic, but Nowlan’s inks and hatchwork add ruggedness to a character who should inherently be as rugged as Indiana Jones post fieldwork. Hitch is equally comfortable drawing Manhawks as he is Carter Hall, and when the tow clash, the visuals are stunning. The background is sparse rockwork throughout much of the story, which makes the detailed set pieces all the more dynamic in their detail.

After years of being primarily a Marvel letterer, Cowles really has made a name for himself at DC. He letters the story here, making the caption boxes decisively introspective, strong, and identifiable. When the captions switch to dialog, Cowles illustrates a solid distinction between the characters present, giving each their own visual speech patterns.

The tag team of Alex Sinclair and Jeremiah Skipper bring the colors, which are a bit on the bright side, especially given the introspective nature of the story, but they’re not distracting. The brightness alters the story’s welcomeness, making it more approachable simply by being brighter. The duo handle lighting nicely, playing off Hitch’s layouts and shining brightly when Hawkman spreads his wings.

It’s a damn shame this isn’t ready to spin into a series, as Lemire has a firm grasp of what Hawkman currently is, what he has been, and what he should be. As I mentioned, this could easily have been a Rebirth book, but it’s a fine addition to the Metal adventure. Here’s hoping we get more Hawkman – soon – and that the creators at least follow the lead Lemire and company give them here.