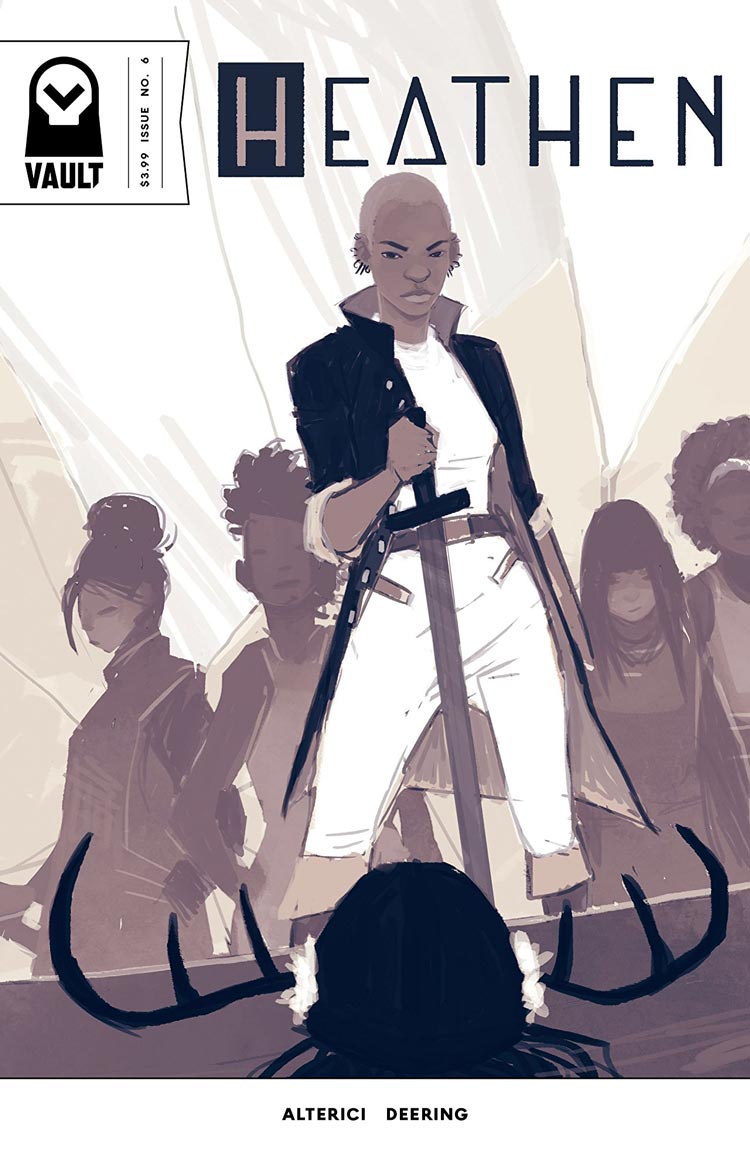 Natasha Alterici’s story of Viking warrior Aydis continues her quest with issue #6. This issue shows Aydis continue to grow personally as she helps others while on the way to complete her task. The issue is full of sensuality, beauty, and love all delivered in a simple sweet package.

While there is a sense of hope in Alterici’s storytelling, though, the tale itself always deals with very serious themes. This can be attributed to the fact that main character Aydis almost always seems to have a smile on her face especially when confronted with a problem.  There is a wholesome innocence to her that elevates the others around her from their downtrodden state of mind.

This is a reoccurring theme throughout her quest: liberation.  Just as she freed herself from the limitations of her culture she carries this vibe with her as she interacts with others. As she goes along meeting others she is spreading this infectious positive vibe. This issue finds her continuing her journey with the pirates she hired in the previous issue as well as the mermaids. These aren’t your usual band of surly pirates but a group of women that again have a positive outlook and are revealed to have a simple mission in their travels. Heathen is a fun read that flows so smoothly it’s over all too soon.

Alterici’s artistic style fits the story perfectly. She draws the characters with a light-hearted tone that is contrasted by the stark limited color palette. There is an abundance of black used in the world of Heathen which creates balance in each panel and makes the characters shine brighter. Everything has a very natural and organic look to it that makes it easy for the reader to accept as real.

Alterici also renders sensuality in a very simple way that is not vulgar or done for shock value at all. It is an organic part of the story that the characters wear as normally as they wear clothes. Though the characters faces are drawn somewhat minimalistic they do not fail to convey instantly the emotions of the character. The eyes especially convey so much to the reader.

The backgrounds tend to be very minimal as well but this again only makes the characters stand out more. There is a panel that stood out to me as exceptionally lovely. It is one of the final panels and is a sweet kiss between two characters. It’s beautiful. Rachel Deering does an outstanding job of lettering this issue. Her lettering looks natural and fits the voices of the characters.

Overall, Heathen is and has been an excellent series that is highly recommended. The characters that Alterici populates her world with are unique and have heart. The reader will want to enter into the pages and hang out with them. Heathen is absolutely one of the best books being made right now.