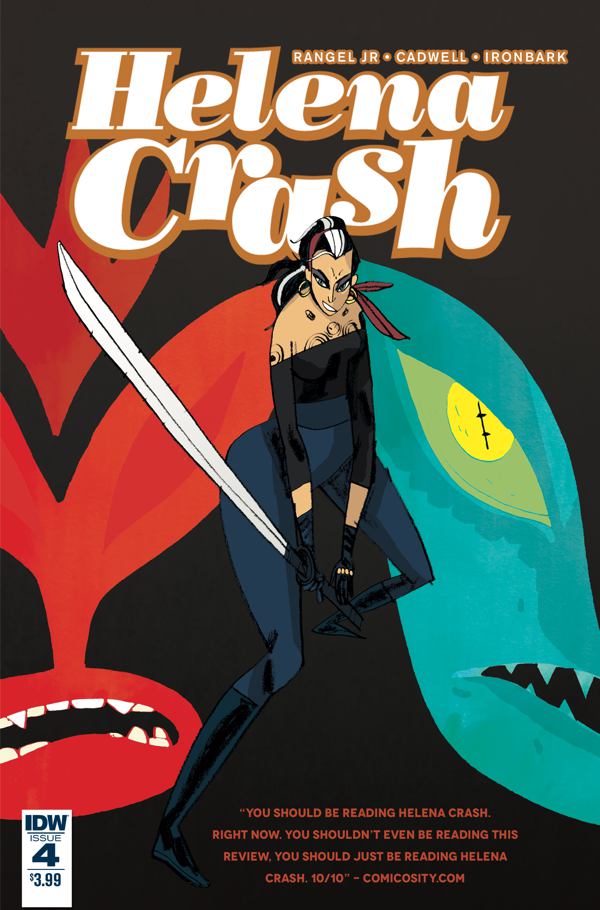 “Most days pass by without incident, they don’t leave an impression. But then there’s the other kind. The days you know are gonna leave a mark.” After Rojo and his gang capture Hemingway, it’s up to Helena to save her mentor in this fantastic issue of Helena Crash!

Rangel’s world is spectacular. It’s a well-crafted blend of futuristic science fiction and retro with nuance. I love how Rangel has created a reality where something between a Mad Max: Fury Road and Speed Racer chase scene can just happen on the streets of Helena’s city. I love how, despite the seriousness of many of the situations within the comic, Rangel is able to maintain a lighthearted and fun tone.

Cadwell’s additional details to scenes always makes the panels infinitely better. The Hot Slice Diner as Helena drives to Kid’s Boxing Gym, the painting of the eagle fighting a snake in Los Fantasmas’ hangout, the snake design on the one White Demon lackey’s motorcycle as well as the Viking horns another White Demon henchman wears, the skulls in Lobos eyes as he says “time to ride”, the detailed skeleton designs on Los Fantasmas’ ridiculous tank of a car—they all add richness and I appreciate those minor intricacies.

I love the creativity that goes into background SFX and words. A large “KRESSH” breaks through a window along with Helena. A “KABOOM” is aflame and being taken in by the gigantic explosion it gives voice to. Rojo and White Demon calling each other out feels more epic with their yells in the background, taking over most of the panel.

Helena Crash #4 is a great conclusion to Helena Crash. It ends the series on a high note while leaving room for a sequel series or additional issues, which I hope the team is able to do. The world is wonderful, the art is unique, and the characters are as colorful as they are terrific. You should definitely read Helena Crash.