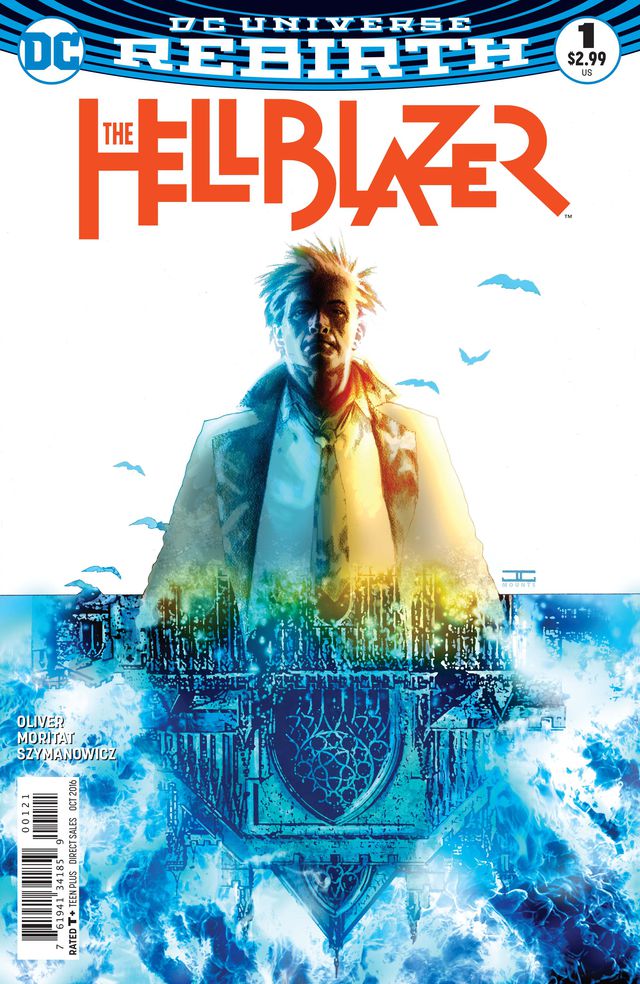 After a Rebirth special that dotted all the i’s and crossed all the t’s for classic Hellblazer fans, Simon Oliver and Moritat chart a course that draws on the legacy and values of Jamie Delano’s inaugural run to make sense of the twisted political realities we find ourselves enmeshed in.

It’s a curious element of the current cultural zeitgeist that World War I appears to be returning to the forefront in the near future through Wonder Woman and Dunkirk, and it’s a tide that Simon Oliver and Moritat find themselves swept up by as they open the issue on the day of Archduke Ferdinand’s assassination.

We’re introduced to Marid and Adnan, likely angels who scuffle over whether or not to intervene in the act of violence that plunged Europe and much of the world besides into the the bloodiest century in human history.

Oliver returns to Republican presidential nominee Donald Trump as a target as he narrates the bloody flow of history that emanated from the Archduke’s assassination, describing Hitler as a figure who rose to power on the promise to “make Germany great again,” an obtuse reference to Trump’s campaign slogan. Oliver has little time for subtlety in his political allegory, recalling George Carlin’s pronouncement “I like moving in and really hurting them. I don’t like this let’s be cute and let’s be clever. That’s the only way to take care of them.”

It’s a philosophy shared by the majority of iconic Hellblazer writers, especially on the topic of racism and ethnic cleansing in both Europe and the United States as confronted by Jamie Delano, Garth Ennis, and Brian Azzarello over the years and a key way in which Simon Oliver is stepping up to join that legacy.

The meat of the issue concerns itself with Swamp Thing calling in a favor to track down his lover Abby, replete with references to the time that Constantine lent out his body so that the pair could have conventional sex together. That particular exchanged happened at the height of Constantine’s conflict with Nergal, which may or may not be pointing the way to his return to the pages of Hellblazer given the number of references to events concurrent with his time as Constantine’s most iconic enemy.

Either way, the issue remains rooted both thematically and historically in the era with Mercury reviving Constantine’s habit of bringing misery to the people around him and forcing them to take on the moral weight of his actions like he did to her in the Rebirth special.

Chas picks up on the fact that much has been left unsaid about Constantine’s trip to New York, drawing together his reaction to Mercury’s reminder of having been a child when she first encountered Constantine and the demon’s invocation of the Newcastle incident. Constantine remains mum about what exactly happened during his American sojourn, cryptically suggesting that its the things people don’t do that haunt them the most.

This draws us back to Marid and Adnan reunited in the present to discuss the repercussions of allowing the assassination of the Archduke to transpire. In the intervening time Marid has come to believe that Adnan was right to stop him. While Marid believes that it was necessary to remain undetected by humankind and the Creator alike, Adnan takes the ensuing war and genocide to mean that the Creator is an impassive and uninvolved force, leading him to believe that humanity needs a strong hand to control it rather than the benevolent influence presence advocated by Marid.

It’s a basic philosophical dispute that winds its way back to the enlightenment and the likes of Thomas Hobbes, whose interpretation of the events of the English Civil War was to advocate for absolute monarchy, but finds a specific contemporary relevance in western flirtations with fascism.

Beyond that, the dispute between the angels and John’s more intimate musings draw together a broader debate about the moral imperatives that drive intervention and inaction from the widest geopolitical scope to the narrowest personal one. The immediate clarity and unity of the major themes in play is one of Oliver’s biggest strengths and one that will serve him well as the arc progresses.

For the most part, Moritat and colorist Andre Szymanowicz stick close to the crisp, dynamic cartooning and moody lettering that defined their debut effort, finding similar success here.

Moritat is clearly at home in Hellblazer, delivering the sharpest and most precise of his recent DC work, but the true standout this issue are the small details like the bits of Picasso’s Guernica he works into the splash page evoking the massive violence of the first half of the twentieth century.

With its second issue, Hellblazer improbably stakes a claim for being the title that reflects the ethos of the Rebirth initiative the most effectively by finding ways to call back to the virtues of the title’s most iconic stories while remaining fresh and relevant to the world it finds itself in now.