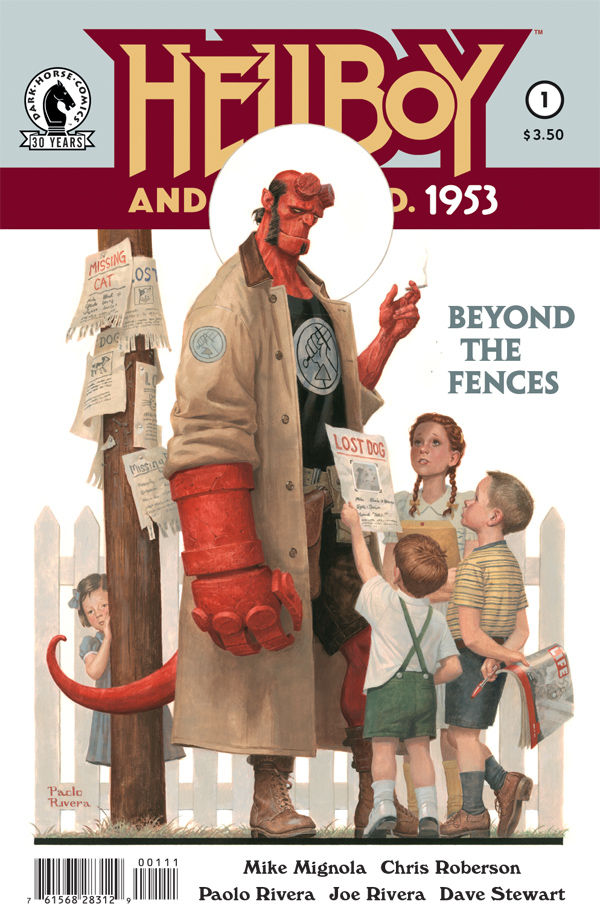 Mignola, Roberson, the Riveras and Stewart take us back to the early days of Hellboy and his time with the B.P.R.D. in a fantastic kickoff issue to what promises to be a very entertaining series.

This one’s got everything it needs: an eerie situation, a good crew surrounding a young Hellboy, some damn good dialogue and a rock star art team. Put these things together and you’ve got something special.

Roberson nails the dialogue in this issue. His Hellboy has just the right blend of inexperience, optimism and “grumpy old bastard” that readers will feel right at home with. This issue features a different side of Hellboy that I’ve not seen much of, him spending time with the general public. These scenes are well written and they have a surprising amount of heart to them. Roberson captures the tone of the Mignolaverse very well, keeping this script true to what has come before it while enriching the Hellboy mythos.

While the “main man” is written very well, what impressed me most was the handling of the side characters. Hellboy’s extended cast each bring an interesting dynamic to the team in this issue and bring out a different side of his personality. Roberson fleshes them out well in this first issue, introducing new readers to who they are and what they do in the B.P.R.D. rather than having it this title be “Hellboy and a bunch of faceless B.P.R.D. agents”, which it easily could be. I like the team, I like their dynamic and this story is very Hellboy.

So, the writing is solid, but I find Hellboy comics often live or die by the artwork. I’ve said in many a review that Hellboy is never better than when drawn by his creator, but I may have to eat my words a bit. Paolo and Joe Rivera can craft one hell of a good line, and this artwork is phenomenal. I was a big fan of Paolo’s work on The Valiant last year, especially how he handled the horror elements of that book, and he’s even better here. Hellboy is a unique challenge in that it is a horror comic that essentially has a super hero lead, so striking the right balance between full on terrifying horror and heroic themes is not an easy feat. Mignola can do it, and so can Rivera.

What impressed me most with Paolo’s artwork (and Joe’s ink work) is how they made Hellboy look young and inexperienced. He’s still a brute, and unmistakable as Hellboy, but there are subtle choices made by Rivera to keep him more slender, a little less beaten and and broken by his years battling all the crazy things he’s come cross. He’s softer around the edges, and a little more naive and the art totally sold that. These subtle details, along with the over the top wild ones like the visions and monsters and the like show the talent of Rivera across a range of storytelling beats.

Dave Stewart is the quintessential Mignolaverse colourist and it shows with this comic. His palette choice defines the tone of this comic and world, tying it to all the wealth of stories that have come before this one. He’s one of the top colourists in comics and work like this is why.

Hellboy And The B.P.R.D. 1953: Beyond The Fences #1 is a great comic with a mouthful for a title. Roberson, the Riveras and Stewart are a dream team to tell this early tale of Hellboy and his time with the B.P.R.D. and I will be back without hesitation for issue #2.