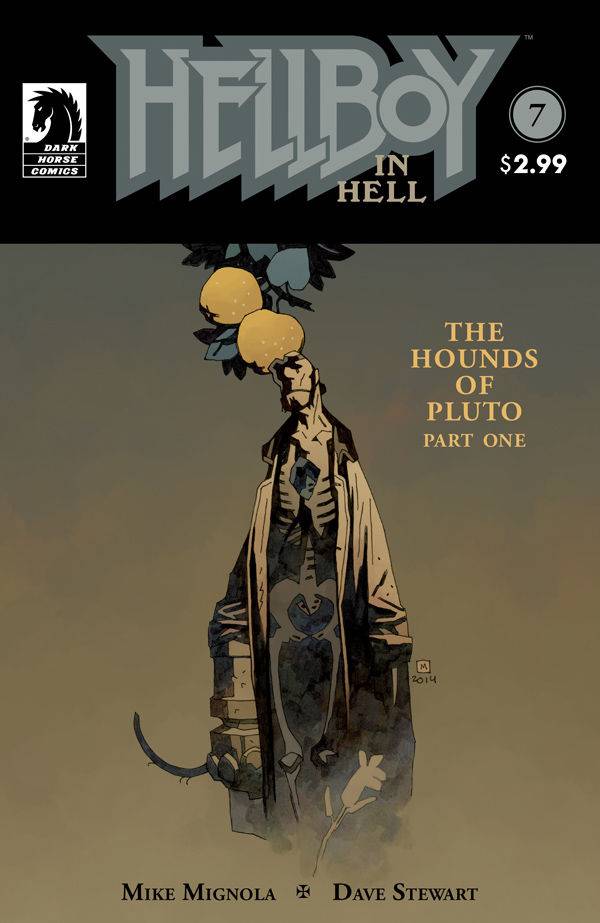 Hellboy in Hell returns with a new mini-arc crafted by the man who just makes Hellboy look right, Mike Mignola. To say Mignola has a way with this character feels stupid, but it is true. He is Hellboy’s creator and nobody has, in the course of what I have read of the character, ever written or drawn him quite the way Mignola does. There’s something special about when Mignola is at the helm of a Hellboy book, and Hellboy In Hell falls very much in line with the spirit of the early Hellboy comics.

By spirit I mean the storytelling style that Mignola employs. He doesn’t hold the reader’s hand through this tale, to the point of me not having a damn clue what is going on at points….but neither does Hellboy. It’s not confusing in a manner that is frustrating, but open ended enough that the reader can draw what conclusions they want based on the choices Mignola has made in the artwork. The artwork really does most of the talking in this issue, and the journey Mignola takes Hellboy and readers on is eerie and amazing all at once. This issue truly reminds me of a work of art that is meant to be examined, inspected, interpreted and analyzed, where each reader may come to conclusions different than those Mignola did when creating these pages. The story goes places that traditional horror books and superhero books don’t, and it is a truly unique issue when compared to what else you will find on the shelves this week.

Mignola’s artwork is absolutely flawless and several pages had my jaw on the floor. He tells so much story through his artwork and, at times, the dialogue is almost irrelevant because the artwork is just so damn good. He knows when to let the visuals do the talking, letting some huge, powerful pages just sit there and resonate, with a lot for the reader and characters in the tale to take in. This is some high concept stuff, but Mignola’s style makes those concepts work and keeps them intriguing. Hellboy is as likable as ever and this comic is…it’s just great.

Dave Stewart’s rich colour work blends perfectly with Mignola’s style and enriches the story in all the right ways. His palette choices fit the bill perfectly and he sets one eerie mood with the colour choices he employs over Mignola’s pencils. This is a skilled colourist working with a master penciler and the end results are excellent.

Hellboy In Hell #7 is a must read for any Hellboy fans, even if they are lapsed and don’t want to pick up where they left off. You may feel like you have no context and are confused as to what the hell is going on, but don’t worry: you’re supposed to. It’s all part of the experience of this comic and I recommend you embrace your confusion and just let the visuals draw you in to Hellboy’s utterly unique world.