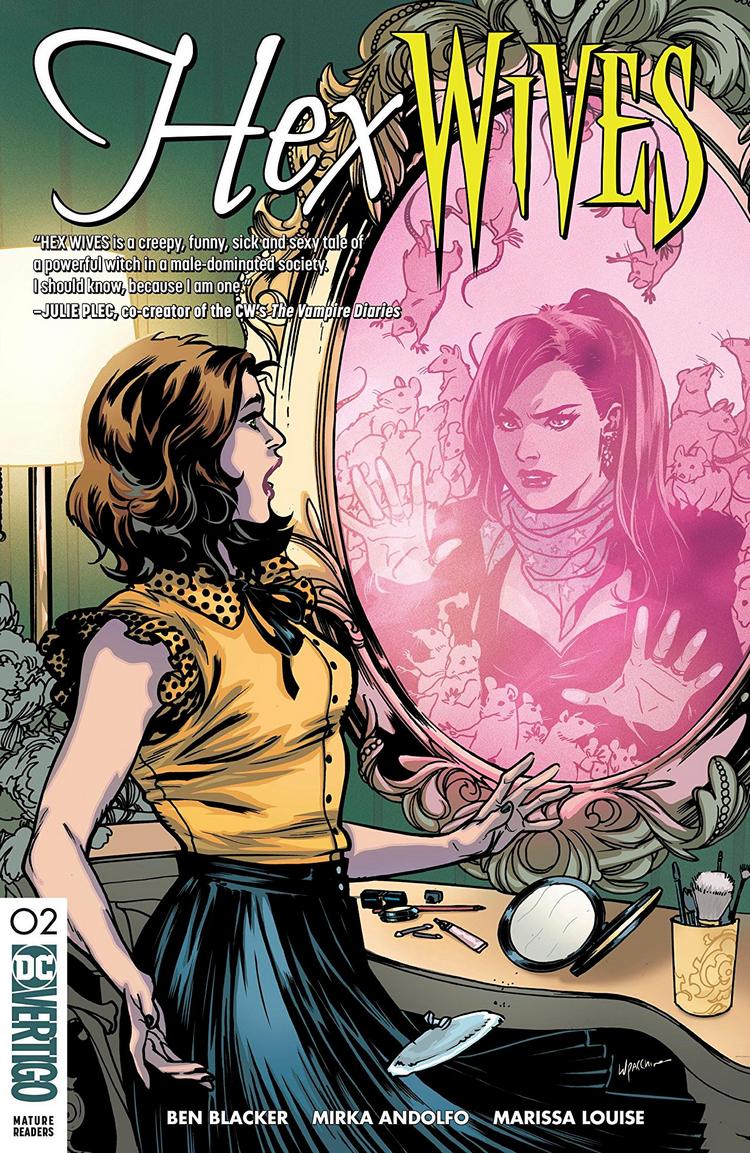 I’ve said it before and I’ll say it again the best way to describe Hex Wives is American Horror Story meets Mad Men and Desperate Housewives.

The series second issue seems to focus mainly on Isadora and her husband, one of the witch hunters seeking to end our coven’s reincarnation cycle. Over the course of the issue we peak into the homes of Isadora, Nadiya, and Rebeckah as we just get a glimpse and a feel of their everyday lives. This reincarnation cycle’s Isadora, Nadiya, and Rebeckah are all vastly different than the witches that we met at the beginning of the very first issue. The ladies seem like the picture of 1950-60’s housewives devoted to two things: their homes and their husbands.

My two favorite things about this issue is the fact that no matter the lifetime Isadora and Nadiya seem to be drawn to each other in one form or another and the fact that no matter the reincarnation cycle the ladies original personalities shine through and you can see small hints of them being unsatisfied with the mundane nature of their current lives. It’s interesting to see the stark difference between Isadora’s sex life with her husband versus her sex life with Nadiya, on one hand one seems extremely unsatisfying and unfulfilling and on the other hand one seems to have been everything she needed and desired.

Once again Mirka Andolfo lends her vibrant and stellar art to the series second issue.

She does a fantastic job of portraying the 1950’s-60’s aesthetic as well as the sense of melodrama that Blacker so masterfully portrays. Andolfo’s art enhances and elevates the series’ dark humor and classic dramatic elements. Marissa Louise’s palette does a good job of elevating Andolfo’s art and actually adding a certain level of context to certain images. There are two panels in the issue where Louise changes the tone of the panels simply be shifting the colors, which adds a sinister aspect to them.

Overall Hex Wives #2 is an interesting and entertaining look at the witches lives within their current reincarnation cycle. I maintain that Hex Wives has all of right ingredients to be one of Vertigo’s best titles. The book’s second issue isn’t as rambunctious as the first but it still packs quite the punch and it still gives us a helluva surprise ending that just reminds me why I’m so interested in this series. Blacker is laying all the right seeds for an extremely interesting series. The moment of our witches awakening into the realization of who they truly are seems to be coming sooner rather than later and I’m absolutely ready for it.