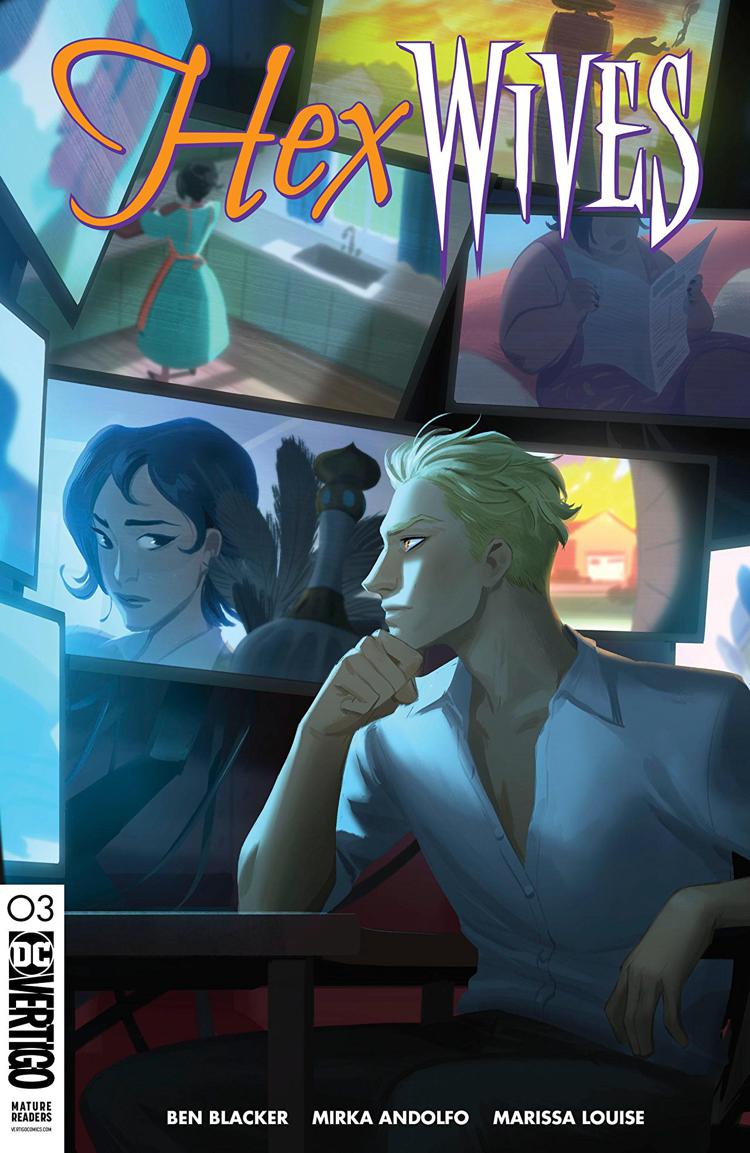 Packed full of deception and misdirection Ben Blacker nails it yet again with Hex Wives #3.

This issue we finally get to take a look at the rouse The Architects have built and just how they’ve managed to keep our witches “tame”. Last issue Isadora stumbled upon a naked elderly woman stashed away behind the walls of her seemingly perfect home. This week with that discovery Isadora comes one step closer to almost uncovering who she is, reawakening her true self, and burning down The Architects entire operation. However of course with The Architects going through so much trouble to ensure that the witches stay in the dark about their true identities, Aaron diffuses the situation before the witch can make Isadora remember. With a swift strike to the back of her head, Aaron makes Isadora forget everything she saw and heard by chalking everything up to a drunken nightmare. It’s during the scene that Aaron also adds physical abuse to the long list of shitty things he’s done to Isadora such as awful sex, deception, mental and emotional manipulation, and just being an all-around douchebag.

The thing I both loved most about this issue and that vexed me the most about this issue is that we truly get to see just how in control of the ladies lives The Architects are. I mean from well-placed phone calls to manipulating them with housework and finances in order to keep them from even having the opportunity to remember that they’re witches. We learn that when the men are off at work they’re actually in a secret underground base outside of the ladies culdesac monitoring their every move and word. Course correcting every aspect of their life and smoothing every bit of rebellion and badassery out of the witches that they can notice. They’re even willing to sacrifice one of their own which is an interesting aspect of this issue in and over itself because you really truly get a sense of just how committed they are to keeping the ladies in the dark. The issue ends with Becky making a mistake that might actually be the key to the ladies unlocking who they truly are.

Once again Mirka Andolfo does an absolutely stunning job with the issue’s artwork. She does a fantastic job of capturing not just the time period but the lifestyle in which the series creator and writer is truly going for. Ben and Mirka’s styles beautifully complement each other as both are quite vivid and playful. Mirka’s art is full of personality which works exceptionally well with Blacker’s characters who are bursting with personality even at a time when they’re supposed to be “tame”. I truly look forward to continuing to see what these two master creators deliver going forward with Hex Wives.

Overall the best way to describe this issue comes from a quote the mother of witches said when Isadora discovered her “Powerful women are called a lot of names by fearful men”. This issue is unafraid to lean into the misogyny of The Architects and the way in which they are manipulating the witches. Blacker does a fantastic job of being very on the nose and witty with his commentary about the way The Architects attempt to “tame” the women or put them “in their place”. I truly believe Hex Wives is a very timely book as it has an incredible amount of relevancy to the cultural shift that we are seeing happening today. Blacker does a fantastic job of making sure that the audience understands that what’s being done to these women is not right and it’s downright abusive and manipulative, but we also understand that the moment they figure out who they are….payback is gonna be a MOTHER!!!

Hex Wives is a really fun series with a lot to saw and honestly, I’m here for every single word of it and I’m along for the ride. I can’t wait to see what the spark is that triggers the girl’s memory and in turn sets in motion whatever plan they’re going to hatch to get their “husbands” outta here.