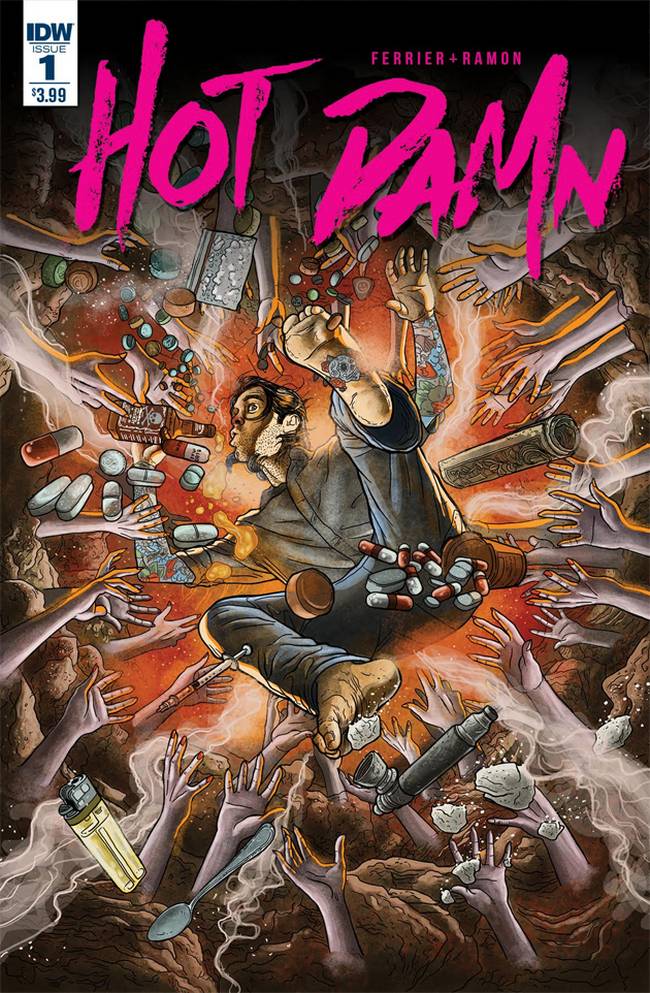 I just read a comic about Hell, and the experience was anything but that. Look, Ryan Ferrier and Valentin Ramon, the creative team behind one of my favorite comics ever, D4VE, is responsible for the glory that is Hot Damn #1, and that should tell you all that you need to know right there, ending this review. But hey, you might need a little more convincing, so I’ll break it down for you if you need to understand just how phenomenal their brand spankin’ new IDW series is.

Hot Damn #1 is all about dat afterlife, taking the rather literal versions of Heaven and Hell and giving them a few corporate upgrades. Teddy Graham, the protagonist, is in Hell for his lifetime of indiscretions, but he sure doesn’t let being dead stop him from living it up. You know, living it up if toenail water drinks and pits of hellfire are your thing. Teddy is making a name for himself, however, in the vast depths of Hell, making friends with demons and beastly therapists, but finds himself in a spot of trouble by book’s end.

If you’re familiar with Ferrier’s work, you’ll know that he is one of the most creatively hilarious guys around. The dialogue in this book is snappy and smart, and the world is fleshing out nicely for a first issue. Teddy is not an ideal dude, by standards of drug use and poor life choices, but he feels truly human and likable, making a potentially unreachable character for a lot of readers relatable. While the narration and dialogue are wonderful beyond belief, I think what I enjoy most about this tale is the ingenuity of the world, the players, and the story-line, which is quite unlike anything I’ve read before. The entirety of Hell (and even glimpses of Heaven) are a feast of incredibly fun characters, tropes turned on their heads, all gussied up with tremendous amounts of humor. If I had one minor quibble with this opening issue, it might be with the pacing, though, which felt a bit off kilter, but that is so, so minor compared to the fun I had reading this book. By issue’s end, so many lines of inquiry have opened, I’m unsure of what the main direction of the story will be, but, to me, this just showcases how nuanced the story already is.

If someone’s going to Hell (Disclaimer: Joke), it’s Valentin Ramon, because he absolutely murdered this book. I mean, damn, he downright nailed every aspect of this first issue, not that I expected anything less than stellar coming from the guy who could draw a myriad of robots, give them readable personalities, and draw the holy crap out of anything thrown his way. On Hot Damn, Ramon is truly letting his talent go wild. The creatures he’s concocted are fantastical and original, yet recognizable in all the ways that matter. His unique style of coloring also brings layers of energy to this story that keep it forward-moving and never dull. I absolutely loved the environments, characters filling the backgrounds with gruesome wounds that told stories all on their own. The background characters just go to show how perfectly Ferrier and Ramon work together, as their unique sense of humor shines through every aspect of this issue. (Personal favorite: the little girl holding flipping the bird. What could that girl have possible done to earn a spot in the underworld?!)

Hot Damn #1 is full-speed roller coaster ride into fiery hot madness that provides more fun than I ever thought possible. Ferrier and Ramon are story-telling champs, and Hot Damn is their heavyweight championship title. At face value, it may seem that somebody could attack this book with a been-there-done-that comment, but this book feels wholly original, and I’d have to yell at anyone who says otherwise. Pick this book up; it would be a sin not to.