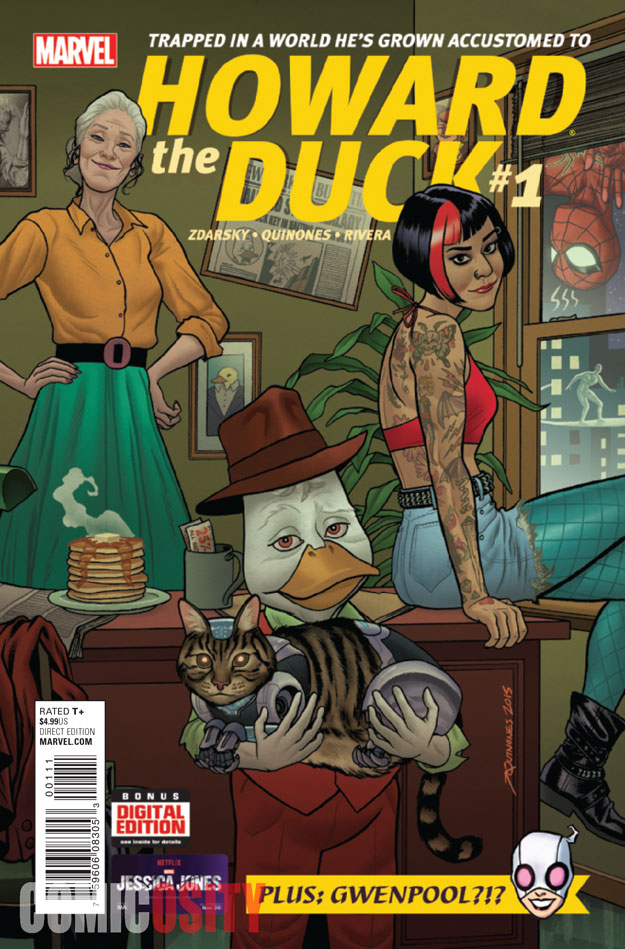 For an alien duck, Howard sure has a knack for understanding American politics.

In Howard the Duck #1, our first story recounts Howard’s feelings about being an alien on Earth and his desire to return home. His companion, Tara, is less than thrilled about this revelation, but she’s dedicated to helping her friend. In part two, our feline-monickered Felicia Hardy sends Howard on a mission to get her stuff back. Both stories are only the beginning of Howard’s adventures and they promise an exploration of Howard but also the eccentricities of his world.

Reading Howard the Duck was new for many reasons. I’d been told I needed to read the series prior to Secret Wars, and it had a feel that I didn’t expect. To be honest, I was caught off guard. While Howard the Duck #1 may not be my cup of tea, I loved how it explored Howard’s inner world and his connections to other characters in the 616.

While I’m still relatively new to Howard, I also know he can’t exist without snark. Chip Zdarsky pulls no punches and writes Howard among a supporting cast who are witty and sarcastic. Howard’s exchange with a gas station xenophobe was an excellent touch to the series, reminiscent of Berkeley Breathed’s Bloom County and Outland. Zdarsky makes great use of the supporting and guest characters in the issue, contrasting them to Howard’s nonchalant approach to life.

What I enjoyed about Joe Quinones and Joe Rivera’s art was the fact that it was about as slice of life as you could get with an alien humanoid Duck. The art doesn’t need flash or an abundance of color, and it works. Quinones and Rivera do an excellent job of matching the visuals of the issue with the context and Howard’s own view of his place in the 616. One of the major strengths of this issue was how the art was able to portray extraordinary events in the context of the relative normality of Howard’s world.

My favorite thing about this issue was the second story. It didn’t quite feel like a classic back-up story, but that’s what it reminded me of. I miss reading those stories and the second half of this issue gave me a sense of nostalgia about one of my favorite comic formats. I hope this is a trend that continues as Howard gets embroiled in more wacky, everyday Marvel drama.

I’m glad I read Howard the Duck this week. It was outside of my typical zone but has a feel to it that is rather novel. In a world of capes, masks, and superpowers, Howard is an alien who gets by with dry wit and political savvy. I think a series like this is needed to break up the superhuman reverie, but also give a new series to people who may not be as into capes. While Howard the Duck was a bit different for me, I definitely have my eye on it going forward.