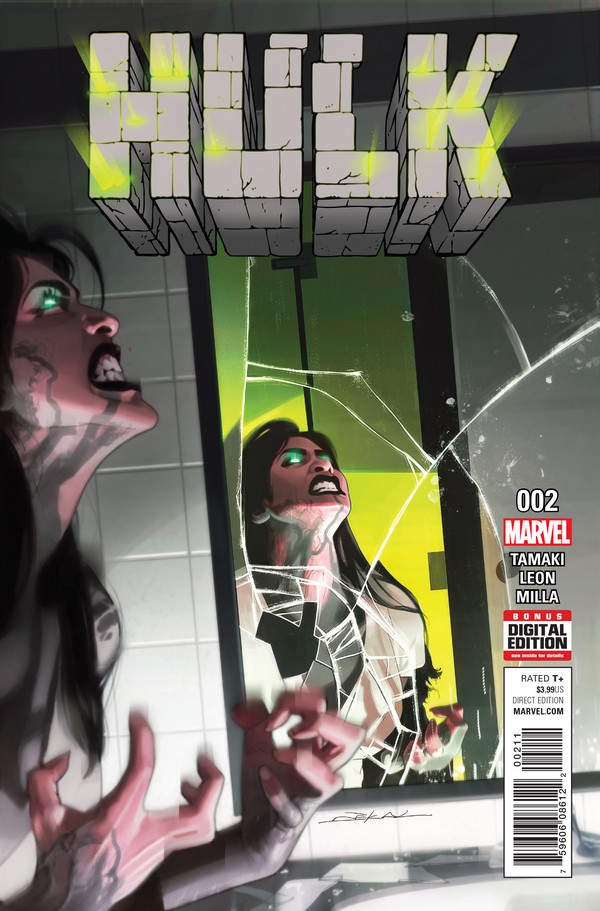 “Someone told me once that it would take time. But time is a liar. There is no time. It’s always here.” Jen Walters tries to live life normally in this issue of Hulk.

Tamaki is a spectacular writer. There’s something real within Jen’s actions, a feeling of true trauma and denial of trauma in order to keep going. There are these cracks seen in Jen’s actions that point towards a disastrous meltdown soon to come in a later issue and I’m intrigued to see what exactly will go wrong. It’s the fact that the feeling of normalcy exemplifies the issues Jen hasn’t worked through that really gets me. It feels truthful and raw in a reserved, Stepford smile-esque way. I love it.

Leon and Talajic create a landscape that perfectly embodies New York City. The variety within the background characters speaks volumes to the attention to detail that they had when creating the environment around Jen. Jen’s facial features as well make the comic. Her emotional and mental state can be seen through the subtle changes in her eyes and I feel like just being able to tell through such small changes is breathtaking.

Milla’s work on colors really sells a lot of the most important scenes within the issue. Jen is unstable, and her instability is perceived through shades of green, swarming her and engulfing her like a tidal wave. It feels more like a predator than an aid, an anchor that pulls her deeper into an abyssal ocean of pain she cannot fully deal with at the moment. That usage of coloring really sells the underlining problem Jen has, and for that, it’s probably the most important element to pay attention to in the series so far.

A scene that screams out to me is one where Jen cracks. She holds it in for as long as she can. She tries not to think about it all day. But it simmers up like boiling water, a fathomless rage that makes her destroy.

She locks herself in her office, her mind racing, trying to think of a way to calm down. She scrambles for her purse, a dark silhouette on a blue canvas.

The background grows greener as she breaks her purse in half. Items disperse across the room as if a bomb exploded.

The background grows greener, she grows larger. She holds a phone, desperately typing to unlock it.

She breaks her screen as she anxiously tries to calm herself down with a cooking video. But she can’t calm down. Not for hours.

It’s paralyzing. How helpless she is to her pain. It’s why you should read this comic.

Read Hulk. Just read it. It is the tale about a woman coming to terms with trauma and odds are it’s going to get even more raw in the next issue. I, for one, am excited for that.