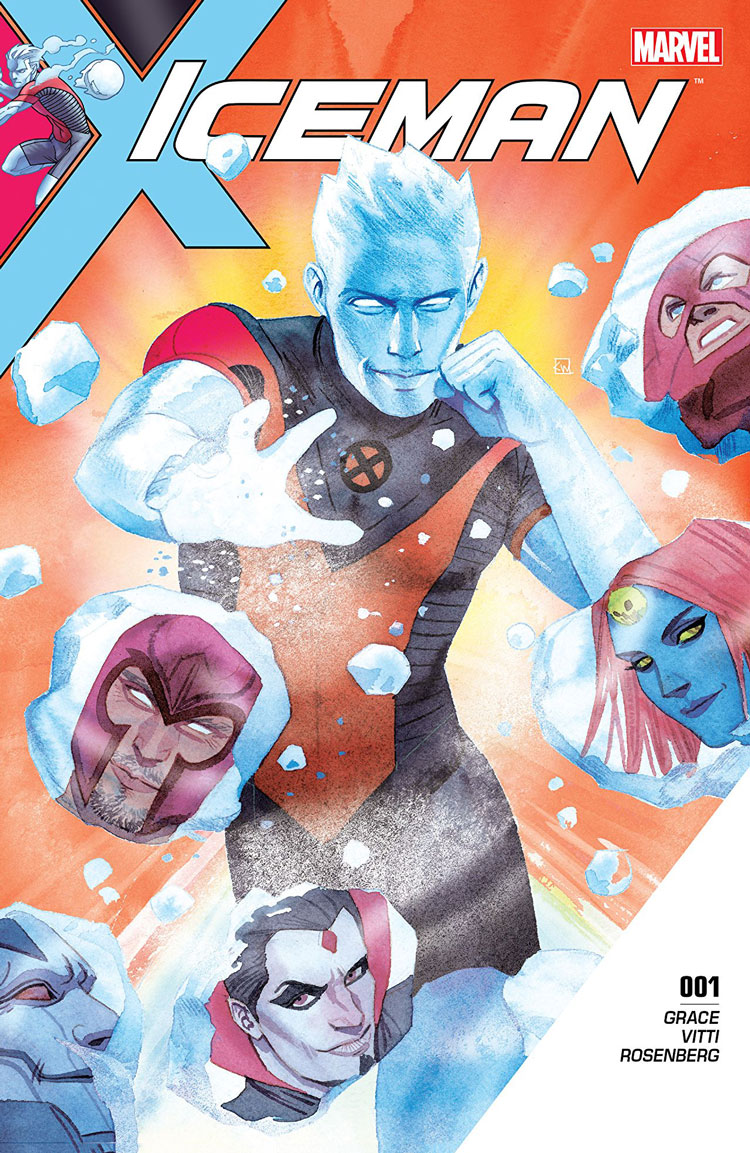 What’s next for Bobby Drake?

Bobby wants to put himself out there, which is quickly complicated by his relationship with his family and watching his younger self get by in a different world. The Man of Ice puts his powers to the test when a Purifier tries to track down a young mutant, forcing the original X-Man to re-evaluate what he wants for himself and what that is going to mean as he explores a new chapter in his life.

As Bobby is examining who he is, I like that he’s kept his humor. His fondness for dad jokes keeps his first solo outing refreshing, breaking the heavier tones we see later in the story. A lot of tiny gems pop up, from the spiky ice armor to the ice clones, reminding us that Bobby’s been here for a long ass time.

The story is relatively simple and easy to get into, which means it definitely won’t be hard for new readers. Continuity nods will jive with old fans who have kept up with the X-Men through the decades.

My only issue with how the story is mapped out is that it feels almost like a one-shot, and I think a more firm anchor for subsequent issues would have helped this first installment. Beyond the relatively light structure and plot, there are vital elements of this story that should not be glossed over.

Both Bobbys live in two different worlds, reminiscent of the chasm between older gay men and their adolescent counterparts. Sina Grace casts the younger Bobby as someone who is more quickly acclimating to being gay, a characteristic of many teenage and early adult gay men.

The older Bobby, on the other hand, is not quite sure how to fit a new piece into his life, evidenced by his foray into online dating, something that gay men of all ages use, but that can be a different kind of kind of experience for older men.

It’s important to note that, while Bobby’s being gay is similar to the reality of other queer men and people, there is a particular nuance for gay men that Grace writes into Iceman, one which may not always apply to others in the queer community for reasons involving privilege, history, and visibility. Grace’s handling of our protagonist is what this comic, and more comics in general, need, in that we get to see at least a couple of issues parsed out in a manner which does not betray the character or the community.

Bobby’s interaction with his parents is viscerally tense, and I find this scene valuable because it did not go the place I expected. Often, gay men and queer characters are captured by snapshots of pain and oppression. Sometimes those moments are valuable, but not always. Grace allows Bobby to experience the aggravating reality that is uncovering sexual orientation and figuring out when to tell people.

While this could have easily boiled down to dealing with his parents’ homophobia (I’m guessing) and their bigotry toward mutants, I’m glad it didn’t. Quite frankly, using such experiences as the notes for queer characters, in this case gay men, should not be as common a practice as it is.

Considering this is Iceman’s first solo series, as well as Marvel’s first headlining solo gay man, infusing oppression into the story would have felt like the same old, same old, a tired rehashing of something that does not always have to become a marker in stories about queer characters.

Grace’s ability to dive into the emotional pressure, exhaustion, and conflict of a burgeoning gay identity without the cliché mechanisms through which such things are often explored is monumental and hopefully a sign that, if such things do occur, they will be handled with, well, grace (I couldn’t help myself).

Alessandro Vitti draws with a roughness that makes some pages shine and others feel more gruff than necessary. My contention with the art comes down to level of detail, which paradoxically works in specific scenes but not others. The Purifier and Bobby’s parents are both cast with coarse lines, in some cases making their expressions seem nearly nondescript. The hospital room and fight scenes are great for showcasing Bobby’s powers, but they end up being more busy than they need to be, and I feel that a lot of impact and resonance is lost in the process.

These moments stand in startling contrast instances with more visual clarity, like the opening page, the fight between the two Bobby’s, and an older Bobby meeting a new mutant. There are fewer distractions, allowing readers to fully take in what is happening in each panel.

In particular, the Danger Room scene is stellar. Vitti skillfully utilizes space in crafting this wintry sparring match, and there are even some minute distinctions between where they are in their abilities. Older Bobby’s ice seems more pointed, jagged, while there is a softness to the younger Bobby’s use of his powers.

Rachell Rosenberg applies a straightforward and neat approach to colors in Iceman. There aren’t a whole lot of bells and whistles and there don’t need to be. Every page feels grounded through the major split between light blues and earth tones, allowing more off the undercurrent of the story to manifest. Rosenberg’s style gives Bobby’s life a relatable atmosphere, one which seems as though it could reflect our everyday lives, ice powers notwithstanding.

Joe Sabino uses a nice trick by setting narration through the structured typeface of a dating sight. I was caught off guard at first, but I really ended up digging the two styles of lettering. Sabino almost recreates the feeling of digital life through social media interspersed through our physical world experiences, similar to tweeting in the middle of an eyeroll worthy conversation with family or even on a stroll down the street. The letters provide a frame of reference that corresponds to what many of us do in our day-to-day, further pushing Bobby to represent experiences that feel more real than foreign.

Iceman #1 makes me happy, to put it simply. While I must hold my fears at bay regarding how long it will stick around, I appreciate that it was done. I like how the story is laid out, and even with a couple of issues with art the issue really does sparkle. The intimate foray into an important issue of gay adulthood is handled better than I’ve seen in a while, leaving me with more confidence about how Bobby’s identity will play into his overall story. I think this first issue is worth it for conversation alone, but it’s also a charming, though sometimes bittersweet, new adventure for Bobby.