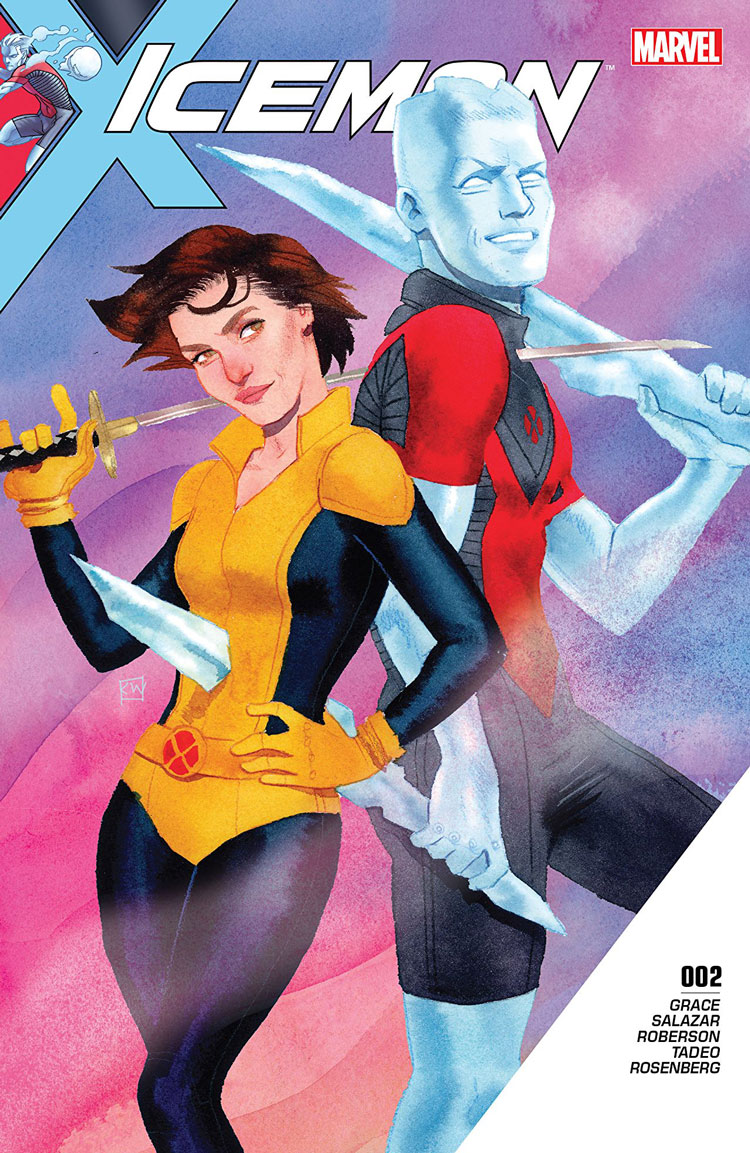 We need to talk about Bobby.

Bobby is set to go on a mission which immediately turns tense with Kitty as his pilot. They are on the search for a mutant who is making electronics, and their powers, go haywire. While they get the situation under control, Bobby and Kitty start to bury their personal hatchet, prompting our icy hero to do something he’s been avoiding for a while.

As a superhero story, Iceman #2 is rather enjoyable. I like a joking Bobby, even if, as Kitty says, about half his jokes land. Their teamwork and superb and the insertion of yet another new mutant keeps the story fresh. The current issue felt as though it held some of the classic X-Men charm. However, there are some issues I will address that mess with the impact of the story.

Sina Grace is on point with his portrayal of Kitty and Bobby. It’s both strange and exciting to think about how they have changed, though this issue illustrates some of their constants, like Kitty’s snark and Bobby’s humor. They are both more than capable and I like that Grace writes them as two leaders who are able to respond at a moment’s notice. Some contention arises, though, through Grace’s handling of Bobby and Kitty’s past, as well as some of Bobby’s speech later in the story.

Edgar Salazar and Ibraim Roberson change the pace for the series’ second issue. The pencils don’t quite gel with the story, seen through people’s expressions and many of the characters’ movements. Bodies feel off and form doesn’t always carry the emotions it needs to. Still, some pages are excellent, like Bobby’s rescue of the Blackbird. I love the overlay of panels, the direction of action, and the use of shape to demonstrate Bobby’s powers. Salazar and Roberson are great at portraying our protagonists’ powers, though other scenes feel busy.

Roberson is also in league with Ed Tadeo on inks. My favorite thing about their work together is the appropriate density they place in each panel. Nothing feels too heavy or light, and this effect keeps the issue from feeling too cluttered or heavy. Roberson and Tadeo’s skills create a sense of cohesion through every page, levelling the weight of the visuals.

Rachelle Rosenberg uses a fitting level of brightness throughout the story. Such an element of color gives the comic more levity, important for not letting it get drawn into the drama between Kitty and Bobby. Similar to the previous issue, Bobby almost glitters, and the fact that Rosenberg keeps him as a focal point aids the reader in identifying him as the most vital element of the story.

There are two points that we need to have a heartfelt conversation about which relate to differing dimensions of being gay or queer. For one, Kitty’s confession was not something I expected. She talked about Bobby being gay and how she found out from Goldballs, implying that such a revelation hurt her as one of Bobby’s exes.

While her feelings of being hurt are valid simply by virtue of them being feelings, this moment seems to highlight her and how she feels, rather than Bobby’s own challenges in coming out as an adult. This kind of interaction is very real, but the optics here don’t quite square with a fully nuanced conversation about why Kitty may be in the wrong or acting from a place of entitlement rather than concern.

To add to this scenario, Kitty becomes the vehicle for Bobby’s introspection, not quite righting what she expressed earlier. I can see the value of her encouraging Bobby to be open with others, especially his family, but in some ways this kind of narrative expresses that marginalized people must always be candid and forgiving of those around them, forgetting not only the reality behind such instances as well as Bobby’s family’s history of bigotry, active in his father and through complicity in his mother. Kitty ends up occupying a space much akin to well meaning cisgender heterosexual people, and without Bobby challenging her, this moment feels less inspiring than confusing or disappointing.

Beyond main characters’ emotional conversation, there is a point where Bobby says something that is suspect at the very least. When trying to devise their escape, Bobby tells Kitty, “Ninja, please,” reassuring her that he can get the job done. However, this moment was not reassuring for me as a Black queer reader. I can see how to many people this may feel small, but the word ‘ninja’ occupies a space in African American Vernacular English (AAVE) as a somewhat comedic play on words, placeholder for the n-word. This matters for a couple of reasons.

One, there is not a ninja in sight and there is a passable three black people (if we’re being generous about skin shading). Even if there were, this statement would still feel off. Two, the space that white gay and queer men hold within the LGBTQ community is often one tinged with casual, overt, or implicit racism, including using this kind of language as though it is ‘innocent,’ then later decrying negative feedback, even if polite, as though there is no harm in what they say. Amidst a debate about Philly’s Pride Flag, the racism of the LGBTQ movement, and the erasure of figures like Marsha P. Johnson, a Black trans woman who famously threw the first brick at Stonewall, to have this blip in Iceman is a bit of a letdown.

Whether through the optics of Bobby as a white gay man or the series’ writer as an assumedly white gay man and a creative team that does not appear to have Black people on it, there’s no way this scene pans out. What I hope is that no other issues that work against the intersectionality of the queer community show up, and that if racial issues do come up, they are handled with care. Otherwise, this comic didn’t need that panel or speech bubble, and I wish almost anything else had been said.

Iceman #2 keeps Bobby as the schtick-wielding superhero, but also has some elements which may not click well, particularly with queer readers. While there is realism in some of the dialogue, as many of us have heard Kitty’s words, it would have served the story better though a contextual look at the desire of disclosure from cisgender and heterosexual people. The racial issue, too, is one that should not be overridden, in that it reflects the sometimes trying existence of people of color within the LGBTQ community. I’m not keen on all of the art though some panels are exquisite, and the rest of the story is a nice little adventure.

However, taking everything into consideration, this issue took some of the promise of the first and made it a more challenging read. I hope things will look up for Bobby from here.