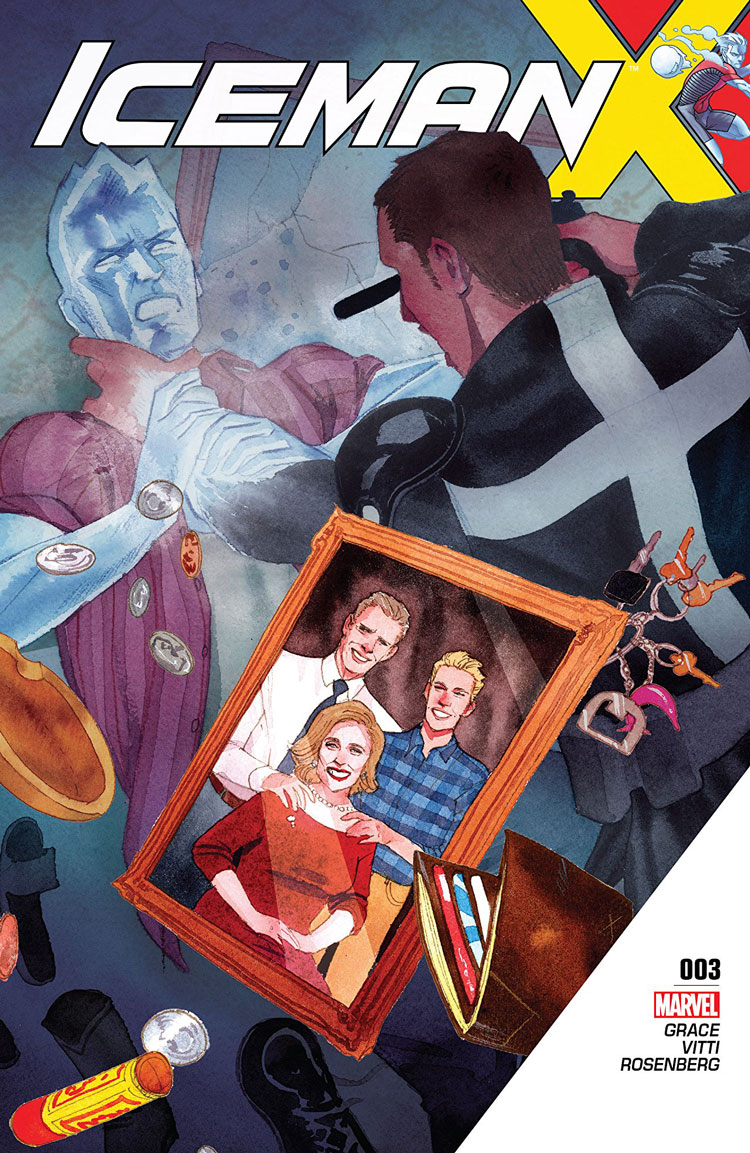 Bobby just wants to have a nice dinner, but he is soon confronted by his parents’ anti-mutant sentiments and a trap set by the Purifiers. Letting his anger get the best of him, Bobby goes all out, while still showing why he’s a hero.

Iceman is still struggling to find its voice. Does it want to be a comic about Bobby balancing being gay with his tenure as a mutant hero? Does it want to explore the Purifiers and a vendetta against Bobby? While the series feels like it is juggling too many things without a clear vision, this issue was at least a narrative change.

Bobby does not know how to bring two major parts of his life together, and that is evident. However, being a mutant takes the forefront, as it has been the major schism between the protagonist and his parents for much of his publication history. This issue amps up his parents’ bigotry, as they spout not only the same rhetoric that seemingly “well-meaning” people do now, but his father’s speech and mother’s complicity is strangely akin to that of the Purifiers. Just when you think Will Drake has learned his lesson, he goes right back to old habits, refusing help from other mutants.

Sina Grace puts Bobby at the mercy of both his parents and the Purifiers using a situation that is unsettlingly similar to current events. The hate speech from both kinds of antagonists give Bobby next to no out and they certainly serve the purpose of heightening our awareness of his and other mutants’ dilemma regarding their existence. Grace’s process is an unfortunate reminder that mutants likely face this kind of bigotry between their supercharged adventures, and we do not typically see them framed in this manner.

However, near the end of the issue there is a mixed moral message delivered. I can see how this story is meant to show that even if someone is bigoted on one axis, they are still capable of countering others’ hate. Bobby’s father argues that the Purifiers are not truly men of God, that they do not represent the Gospel. Yet he acts in nearly the same manner as them, sans physical violence, though this distinction is not really a marker of reduced harm.

If the purpose of this comic is to show that bigots can disagree with bigots but in the end are still the same, then that is one thing. Yet, that narrative is not clearly shown or executed, and the story would have benefited from a more direct delineation regarding this part of the plot.

Bobby’s mother is another point of confusing messages. She openly taunts him, expresses fear toward him, then talks about how she doesn’t really know him and for him to give them a chance. These are all well and fine, but they point to the whirlwind of responses marginalized people get that are near, if not already, gaslighting. Bobby’s reaction makes this exchange that much more head scratching because he accepts her appeals for him to trust his parents, rather than justifiably bucking against them.

I feel there are too many things moving within the plot of the series so far and that one thread, rather than many, needs to be followed, including the use of being a mutant as a metaphor for oppression and marginalization rather than discussing Bobby’s existence as a gay man and how this contributes to his intrapersonal conflict.

Alessandro Vitti is back, using technique that is superb and that provides interesting narrative presence. Every moment of action flourishes through Vitti’s handle on brusque visuals. Ice takes on a violent and massive presence, and Bobby’s ice armor becomes particularly foreboding. Vitti expresses anger, annoyance, and sadness with each use of Bobby’s powers, an essential point in artistically representing the character’s feelings.

Bobby’s parents appear monstrous and almost nondescript except for their contempt. This imagery works, as long as it has a narrative purpose, especially because they look different than any other character presented. For him, they may be the true monsters, the ones he is scared to face, a powerful point as he faces off against anti-mutant bigots.

Bobby is consistently the brightest person in the room thanks to Rachelle Rosenberg. Color creates an effect where he stands as our representation against hate. Whether he is using his powers or not, he is shown with clarity, contrasted with the darkness of much of the comic as well as the muted colors in the other people within the story. Rosenberg shines a light on Bobby with bright blues, allowing him to take a position vital to many of the themes presented in this comic.

Iceman #3 has pushed the series in a better direction. I’m still unsure how all the narrative pieces work together, particularly in the plot, but they seem to be coalescing into something that has a vision of the future. Bobby has an interesting story to tell, but the series needs to catch more of its bearings. There are signs that things will pick up for the X-Man and I hope that what develops is something that does the character justice.