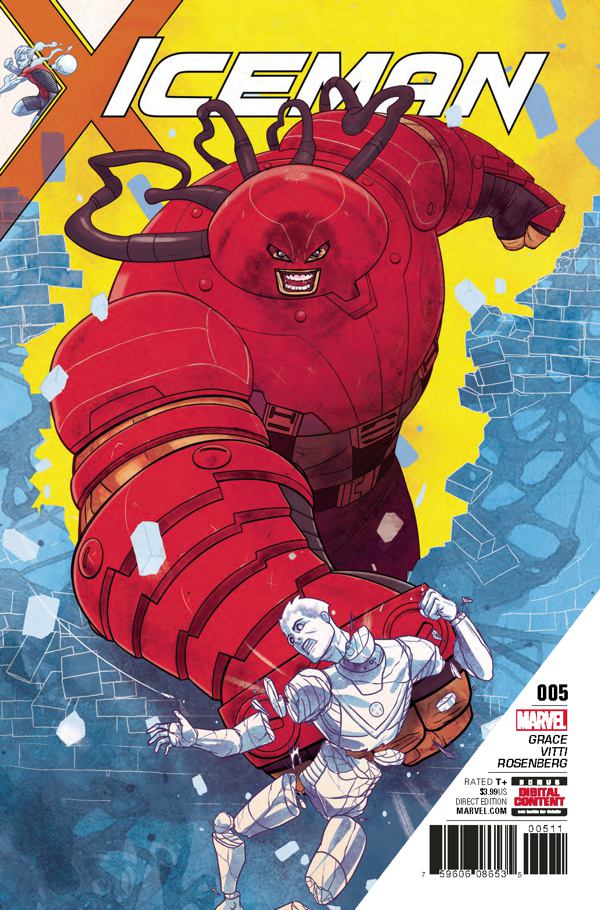 On the heels of Bobby’s revelation, he has a conversation with his parents that has been a long time coming. Dealing with his parents is already enough, so making the Juggernaut a punching bag is the perfect stress release.

Iceman #5 gives the series a sparkling clarity that we haven’t seen to this point. The story’s pace, tone, and emotional depth all work together without missing a beat, giving the primary conflict more than adequate amounts of space to unfold. The story can be broken down into reasonable segments that all build on each other, and ramifications from the first page work through every one after. Coming out is no small task, and even though this one a situation I would not wish on anyone, the care and dedication given to it while also bridging superheroics was a welcome and needed touch.

I realize that I hate the kind of conversation Bobby has with his parents, but I can’t doubt its reality and usefulness within the comic. My contention is not with the quality or execution, but rather that in 2017 we still have these conversations. This talk is painful, it is full of levels of hurt that almost feel wordless, yet it is crafted with love, care, and deliberation. It is not rushed; it is a hurtful reminder of what it’s like to have this kind of talk with anyone, but not made tawdry. The Drakes respond to their son in a way many of us have seen in our lives and in media, a reminder that the expectations our loved ones have for us can sometimes supercede a sense of love. Sina Grace’s construction of this scene and its impact on the narrative is exactly what readers and Bobby needed.

Grace writes an angry, conflicted, and heartfelt Bobby and changes the dynamics for his parents. Seeing Bobby’s feelings laid out with this level of detail provided a jump off for everything else that followed. Even Juggernaut’s surprise arrival in New York works within the context of Bobby’s frustration. With the Drakes, Grace almost switches their characterization, as Mrs. Drake becomes the unyielding aggressor and Mr. Drake ends up being the one who is more compassionate and supportive. While the terms are still rather cold between the family, we see a new kind of interaction between them held through the complicated nature of Bobby’s coming out.

Alessandro Vitti’s talents are better suited for tension, whether emotionally or in a fight. The slow scenes don’t mesh as well with Vitti’s use of gruff lines and details, but this stylistic bent is put to excellent use in this issue. Juggernaut in particular looks spectacular, and the details in his suit are crafted with keen detail. I think Vitti’s best moment is in drawing Bobby’s creation of ice wings, demonstrating significant changes in his powers and a powerful visual moment in the overall story.

Rachelle Rosenberg uses a motif that constantly puts Bobby in the spotlight, but this time there’s a twist. He’s always a visual element at odds with his environment. In the opening scene, he’s in red, contrasting his parents and Kitty. In his fight with Juggernaut, he’s that same old glimmering blue that helps to emphasize his powers as an artistic tool. In the last pages, though, Rosenberg dims the scene, muting the colors in the environment and between Bobby and his father in a manner which helps equalize them visually. Bobby’s red still stands out comparatively, but it is toned down, much in line with his emotions, and touches upon the resonance of this moment with his parent.

Iceman #5 marks a turning point for Bobby for too many reasons. His family, his powers, and his life in general are put on display with an emotional intensity appropriate to the character, giving life to a conversation many people have had with their loved ones in a journey toward authenticity. I appreciate how everything was unpacked, the fact that much of this issue was a par for the course type of storytelling but without being contrived or empty. Bobby has some truly great moments and none of them are easily or simply reduced to common denominator narratives. I’ve wanted things to look up for Bobby and if this issue is any indication, I think things are heading in a great direction.