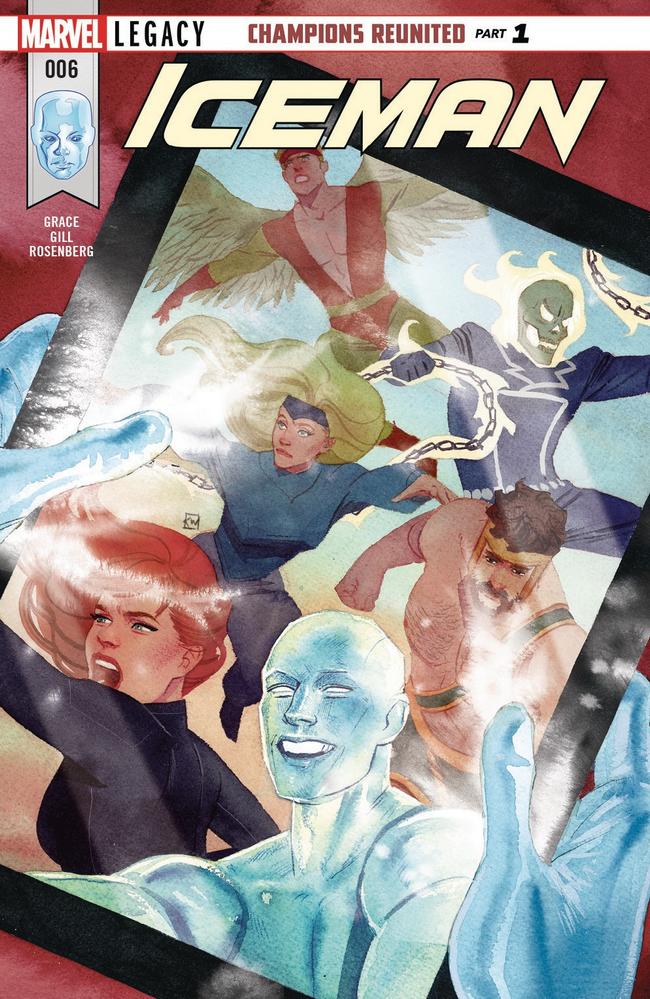 After the loss of Natasha during Secret Empire, her old team, the Champions, get together to mourn her. Their memory is fuzzy, but that doesn’t stop them from imbibing in honor of their friend. Bobby tries to make sense of Natasha’s death and what to do with his time in L.A., especially after he meets a potential suitor. As always, he doesn’t have much time to enjoy himself before giant robots show up to ruin his date night.

Iceman #6 is continuing the stellar storytelling from the previous issue, this time including more characters from Bobby’s past and diving headfirst into his life of dating men. One scene doesn’t quite fit the story, but overall things are tied together well. Watching Bobby actively get a chance to pursue something, even if brief, with a man was striking because it has been a long time coming and was reminiscent of common aspects of gay dating and was a simple introduction to aspects of gay culture, from the older hanky code to the role that online dating plays in developing relationships now.

Sina Grace flips the script for the series by being in your face with the gay and subtle with the humor. It’s nice to see Bobby getting to explore romance and sexuality with another man, and this element of the plot is a strong reminder that he hasn’t really gotten the chance to do so. His meet-cute with Judah brings back my own memories of romantic connections, and their speed, and I imagine many people may see the realism in this scene. Judah’s presence also puts a mirror to Bobby, revealing how humor is integral to his personality but also a mechanism of him coping.

Speaking of humor, I love Grace’s approach in this issue. Rather than Bobby always being the bastion of witty banter, he takes a backseat and more of the jokes come through Judah, the Champions, and perfectly timed dialogue. I’ve written about Grace casting a sincere Bobby, and I feel like that truly comes through when he’s not being the jokester. Him being among the Champions gives him more room to not take up all the comedy and Grace takes advantage of this by playing the characters off each other and letting humor emerge through their interactions.

The only part of the story that doesn’t work for me is the introduction of the Sentinels. Keeping the story focused on Bobby’s exploration of the men of L.A. and the reunion of the Champions kept the story rolling, while the Sentinel scenes seemed more disconnected. I’m curious as to what Grace will do with this aspect of the story, but I also wonder if it would have functioned better only as an end scene connecting to the next chapter or its own story outright.

Robert Gill draws an engaging slice-of-life adventure for Bobby. Facial expressions are at times more nondescript than they need to be, somewhat clouding the emotions of particular scenes. Even with this drawback, I do appreciate Gill giving prominence to Bobby’s first kiss with a man, one of the most important scenes for this comic and its star hero. While superheroics are not the main focus of this story, the arrival of the Sentinels and thus the Champions rising to action look stellar, which makes me excited for the next issue.

Rachelle Rosenberg seems to channel the environment when doing colorwork. Looking through the story, each section is put into a particular physical framework: the dim yellow of a dive bar, the glow of L.A. at night, and the bright lights of a nightclub. All of these settings influence how the characters look and bring out important aspects of each scene, like the fog of memory under soft lighting and the energy of Bobby and Judah beginning their romantic foray.

Iceman #6 continues to find and use its voice. Having a firm focus guides the story and helps the story feel cohesive on one level, and it addresses the elephant in the room by putting a spotlight on Bobby being gay and how that fits into his life. The team works together to tell a good story at every level, though there are a couple of areas that detract from the strength of the narrative. Bobby and the team working around him are heading in a good direction that I hope is full of way more gay boy kisses.