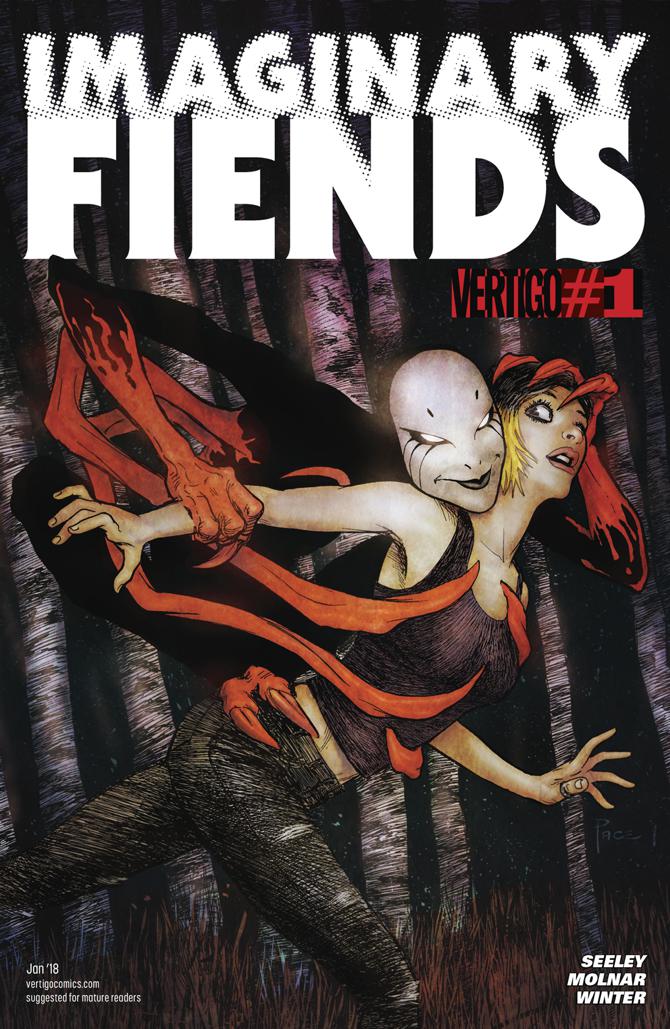 Imaginary Fiends #1 is a Vertigo book through and through, and it dredges up memories of vintage horror and imaginative mystery. A mix between Beetlejuice and Men in Black, Imaginary Fiends is a striking, unexpected tale of accidental monsters and inescapable horror. In the first issue, we learn that monsters are everywhere, and sometimes we need them just as much as they need us.

This issue opens on a familiar scene- a bunch of kids, breaking rules and trying to be cool. Unfortunately, the wrath of their parent sis not the only consequence. There are dark, supernatural forces looking to latch onto innocent children and those monsters will do anything to get what they want. For Cameron and Melba, the monsters and the nightmares never go away, but become a part of them for the rest of their lives. Polly Peachpit is one of many monsters, monsters who dwell within us, hunt us., and need us.

Tim Seeley is no stranger to horror, especially vintage monsters. He recently spearheaded an adaptation of the hit vampire flick, The Lost Boys, and his run on Nightwing  was decidedly mysterious. As an introductory issue, this comic moves pretty slowly. This does help focus in on individual characters and establish their journeys, but it is a little daunting. The story is solid and interesting, but the exposition is laid on pretty thick and wordy in the beginning, which creates some awkward pacing and tends to take away from the suspense. As a whole, though, the story-building really comes together by the end of this issue and sets up a premise that is completely unexpected.

What truly raises the bar for this comic is the art. Stephen Molnar perfectly captures the throwback thriller vibes with varied panel sizes, dynamic angles, and relaxed scenes that flow together seamlessly. Clean lines, detailed facial expressions, and sparse backgrounds bring the focus to the characters and, most importantly, the monsters.

Quinton Winter works magic with the coloring, adding deep shadows to the more strenuous scenes and drawing focus to the individual characters. Painterly backgrounds coupled with striking faces highlights the movement of the plot through time, which helps distract from the slower pacing of the story. Carlos M. Mangual shines on lettering, as well. The different styles used for the main human characters, the individual monsters, and the “4th dimension” language accentuates the differences in tone and intent between the well-meaning humans and their stalking, terrifying supernatural counterparts. Utilizing different styles and colors in lettering draws contrast between separate scenes and characters, which helps move the exposition-heavy plot forward to a great cliffhanger ending.

Imaginary Fiends is a sensational, innovative concept that draws inspiration from vintage horror and our own fears and nightmares. Though the script can seem heavily worded or a bit silly at times, the overall tone and message pf the book is strong, especially for a first issue. The art is striking, the themes are imaginative and fresh, and the nightmares are disturbingly real.

If you are itching for more of Stranger Things, or missing Halloween already, Imaginary Fiends is the perfect dose of horror, mystery, and nostalgia.