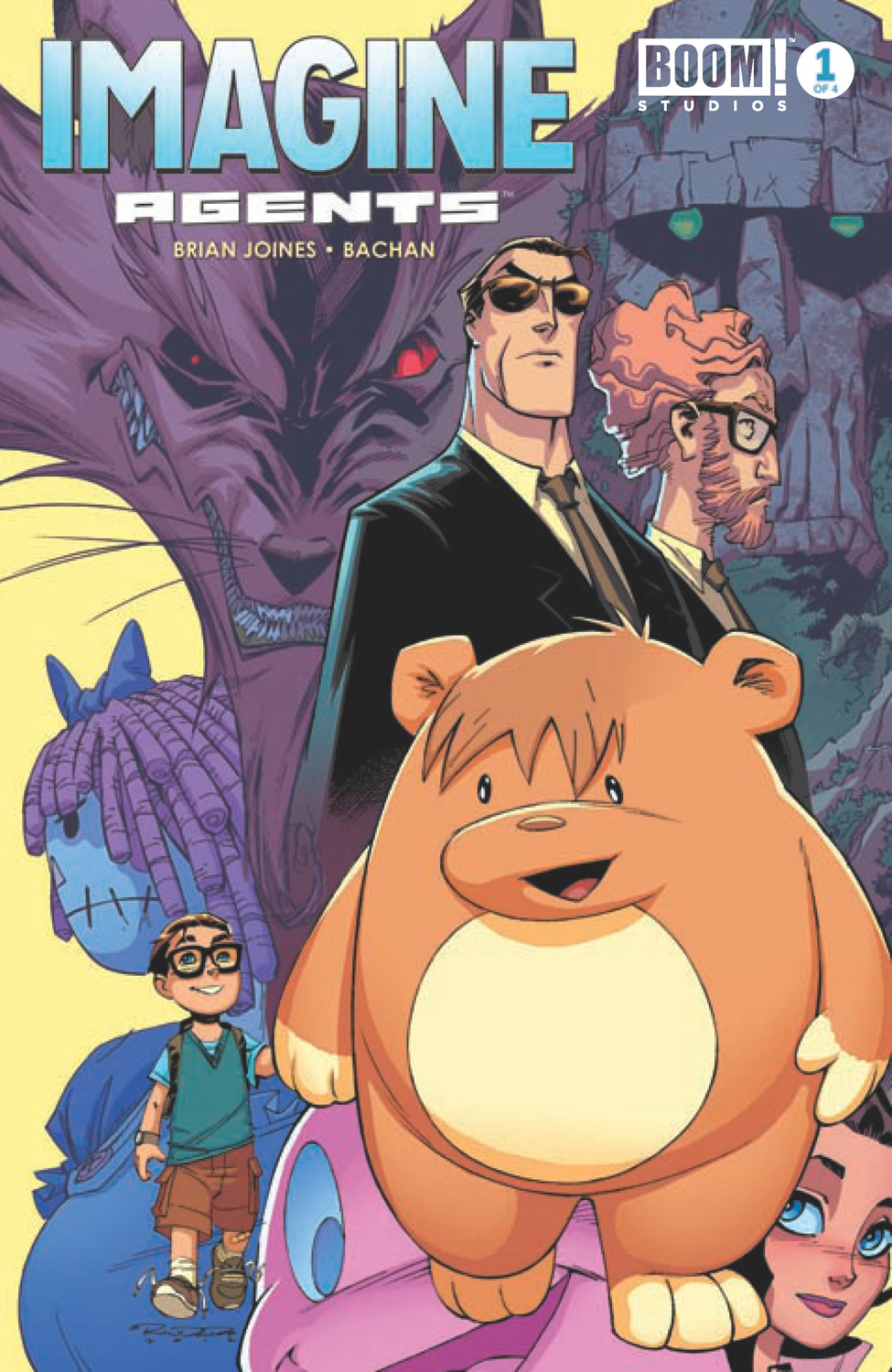 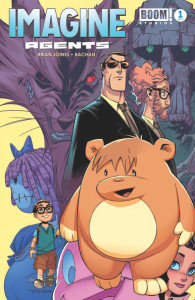 What if all the imaginary friends that kids make while growing up were indeed real? How would the powers that be of Earth handle the thousands upon thousands of creatures created in the minds of children everyday?  That is essentially the premise of IMAGINE Agents, the new all-ages title from writer Brian Joines, penciler Bachan and BOOM! Studios.

IMAGINE Agents stars agents Terry Snowgoose and Dave Slatern of “The Institute Of The Management, Acclimation, Guardianship And Incarceration Of Notional Entities” aka I.M.A.G.I.N.E.. The agency is in charge of quietly handling the problems created by children’s imaginary friends, known as “Figments.” Agent Slatern is a seasoned veteran while Agent Snowgoose is the inexperienced one with the minimum training. Slatern is the stoic one while Snowgoose expresses his emotions. If this all sounds familiar it’s because the comic borrows the basic setup from Men In Black. In fact, the best way to explain the premise of IMAGINE Agents to a prospective reader is to say that it is MIB with imaginary friends instead of extraterrestrials. While the basic concept may be derivative, the execution is wholly original and works wonderfully in the comic book medium.

First and foremost IMAGINE Agents is a lot of fun for readers of all ages. The majority of this first issue is an information dump that fills the reader in on the where’s, what’s, and how’s of the world where imaginary friends cause real problems that a group of people actually have to clean up after. Luckily for the reader, the info dump doesn’t feel like one and the introductions to people, places and concepts are told organically through action. In the first few pages alone Agents Snowgoose and Slatern respond to a call and we find out that adults can’t see the figments unless they wear a special earpiece, and that figments can be captured. Joines continues to introduce characters throughout the book and they are each used to reveal a little bit more about the world. It isn’t until the very end of the issue that the plot moves forward with the introduction of Dapple, the seemingly evil figment. One of the most endearing aspects of the book was the fact that Joines plays the concept relatively straight while the art is bigger than life. The ideas that imaginary friends are real, are created from the imaginations of children, have names such as Blounder and Furdlegurr and are completely ridiculous looking are completely normal to these characters. While there is plenty of humor in the issue, none of it is at the expense of the concept. Many writers in this situation would be inclined to find a way to make fun of some of the names or appearances of the absurd characters. Instead, it is all taken quite seriously and the book is better off for it.

Some of the best praise you can give a writer is to say that all of their characters seem fresh and unique, and for the most part that is the case here. The only characters that don’t seem fresh at first glance are Snowgoose and Slatern. With that said, they may be the stereotypical secret agents, but them being so normal while being surrounded by the fantastic allows their characters to work as an entry point for the reader. Moog is the first figment we meet as Agents Snowgoose and Slatern are called in after reports of property damage, and he continues to provide comic relief throughout the rest of the issue. Blounder is a figment who spent 15 years being friends with each of five kids in a family only to be lost after the last kid gets too old to see him. We are also introduced to Elliot, a human kid, and his best friend Furdlegurr, a giant bear like figment who seem to be prime candidates to be pulled into the conflict between Dapple and I.M.A.G.I.N.E.

A nice thing about the premise of IMAGINE Agents is that it lends itself for wacky characters whose looks are only limited by the artist’s imagination, and Bachan delivers. This issue introduces numerous characters and all of them are designed in a way that lives up to the premise of the comic. None of the figments look alike. Moog “Is a freaky Easter Island meets millipede thing” that is driven by his creators “interest in bugs and giant statues.” Blounder is a pink blob with a hat, and Furdlegurr is a walking bear with nice hair. Other figments include a walking fire hydrant, a T-Rex with antlers whose creator imagined him as a deputy, and a menacing giant doll who has the fitting name of Big Doll among others. Not only are the characters unique, but they are perfectly rendered. Penciler Bachan and colorist Ruth Redmond bring a style and tone to the art that fits everything that this book is about. If this first issue is any indication it is that Bachan will be able to handle whatever craziness Jones decides to include as the story progresses. The art can go from cute and cuddly, to mean and vicious, to scary in the span of a few pages. The end result is a simple, clear, and beautifully drawn comic book.

After reading this issue I am eager to see what Joines and Bachan come up with next, in terms of both plot and crazy awesome new figments, as the book quickly established itself as one of the most unique, imaginative books on the racks. Even though most of the issue was devoted to introducing characters and establishing the rules of the world, IMAGINE Agents #1 was a great read that can be enjoyed by the entire family, and is one of the most entertaining debut issues of the year. If you remember what it was like to be a kid, and still hold onto the memories of having an imaginary friend that you wished was real then this book is for you. If you have a kid who enjoys comic books then this book is for both of you. Finally, if you are just looking for a fun comic book then this book is for you.