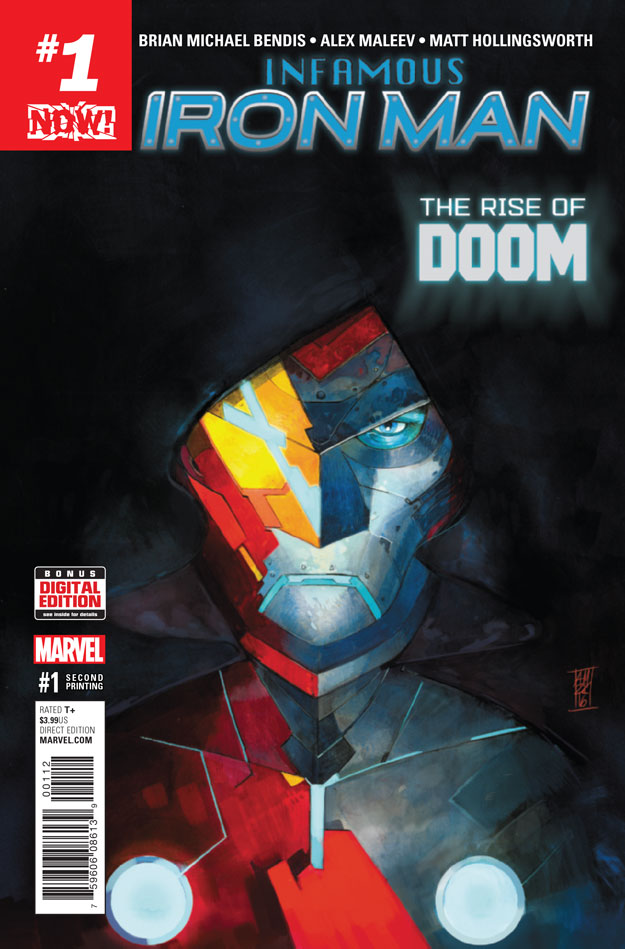 Well….hello there, Doctor. What have we got going on here?

Infamous Iron Man #1 kicks off the next phase of Victor Von Doom’s life, with Doom attempting to karmically turn his life around. Bendis has taken this character down an interesting road during his Invincible Iron Man run, and this series seems like the logical continuation of what readers have seen thus far. This issue acts as a jumping on point for readers and Bendis does a good job making this new Doom accessible to readers. You don’t need to have read a single page of Invincible Iron Man to know the score here, and this really feels like a Doom book.

Bendis also does a solid job setting up the plot of this first arc. He’s pulling out some classic pieces of Doom’s past, and there’s a guest star in this issue that will certainly make things interesting going forward. His use of a misogynist dolt of a foe at the beginning of the issue set the table for a great “new Doom” moment that helps show the new status quo, in a sense and Bendis has set up a solid base to build from. The very thought of Doom wearing armour for good is intriguing and how the Marvel universe will react to him working for good will be an interesting plot thread going forward.

Alex Maleev’s artwork is rock solid throughout this issue and nicely amplified by Matt Hollingsworth’s colours. The two set a great visual mood for the issue, not shying away from Doom’s arrogance and the power within the character. They also balance the potential thread that is ever present with the character: has he actually “gone good” or is this just the next ploy of one of the greatest villains of all time? Maleev and Hollingsworth convey all these things in the pencils, seemingly with ease. Maleev’s style is perfectly suited for this tone of story and he executes with precision.

The era of Doom is here and I was quite entertained by Infamous Iron Man #1. While we’re still waiting for Civil War II to finish so we have some idea of the final events that lead to the outset of this title, there’s no disputing that Bendis, Maleev and Hollingsworth are a talented team working with a strong, multifaceted character that can be the focus of some solid stories. I highly recommend readers give Infamous a shot.