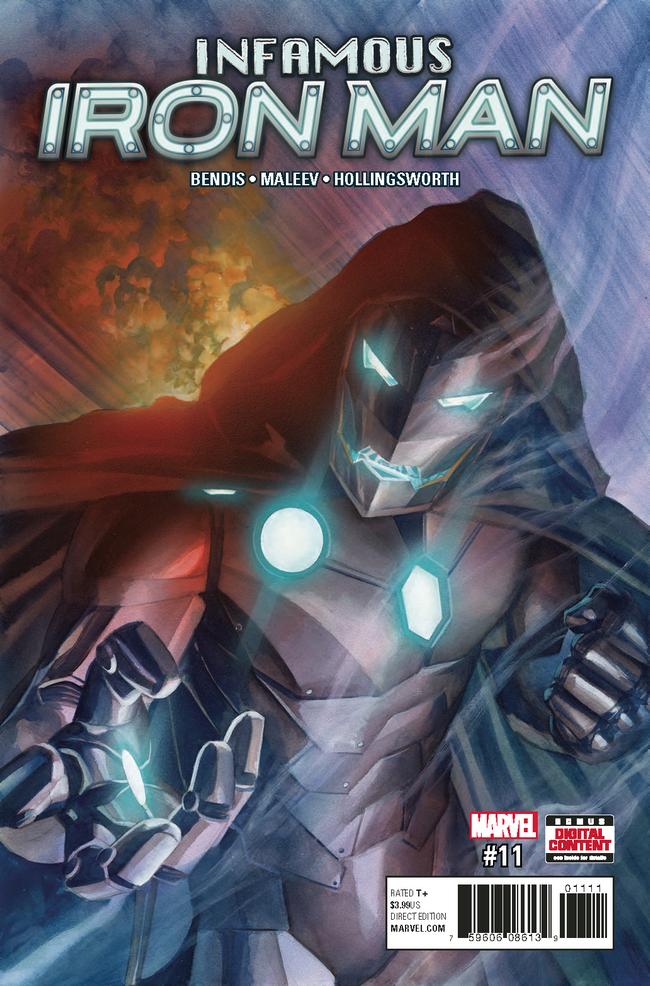 Victor and Stephen have a heart to heart as the Infamous Iron Man continues his quest toward retribution.

Can he get there? The central theme of whether or not Victor Von Doom can truly change his ways is still present, but this issue is where a lot of plot threads come to a head. S.H.I.E.L.D. has reached out to the Sorcerer Supreme to give Doom the once over which leads to some really solid conversational dialogue considering the history these two characters have. They are two of the most powerful magic entities in the history of the Marvel Universe and Bendis draws on their long, twisting relationship well here. If you recall, Strange is one of the only people who actually knows what the hell went on during Secret Wars and I really liked how Bendis alluded to how close these characters are without losing sight of the moving pieces in this story.

The conversation is deftly handled by Alex Maleev, who goes wild with the surroundings the two sorcerers are conversing in. This is not your regular pair of characters sitting a table and Maleev makes sure that is apparent with every page. Matt Hollingsworth’s colour work in this issue is phenomenal, taking Maleev’s wild artwork and pushing it toward the psychaedelic. The two really nail the entire art package of this issue and I liked how Hollingsworth’s colour work delineated events occurring outside the mystical realm and within it. Their work on Ben Grimm really grounds the non-magical elements of this story well and the final page is a fabulous splash that is dramatic and old school all the same time.

Brian Michael Bendis has done a great job walking the tightrope with Doom in this series. While everything he’s saying is on the up and up, he is still Doom and the writer still has not tipped his hand as to whether or not this is part of a larger ploy. He’s simultaneously presented a Doctor Doom that is an underdog yet still immensely powerful, which is no easy feat to pull off. Quite simply, this has been one heck of a character arc for one of Marvel’s greatest characters.

Infamous Iron Man #11 is a great read. This is a deep dive character analysis of one of the most iconic villains in comic book history and Bendis, Maleev and Hollingsworth are pulling out all the stops. This one just blew up big and I look forward to what is coming next for Victor Von Doom.