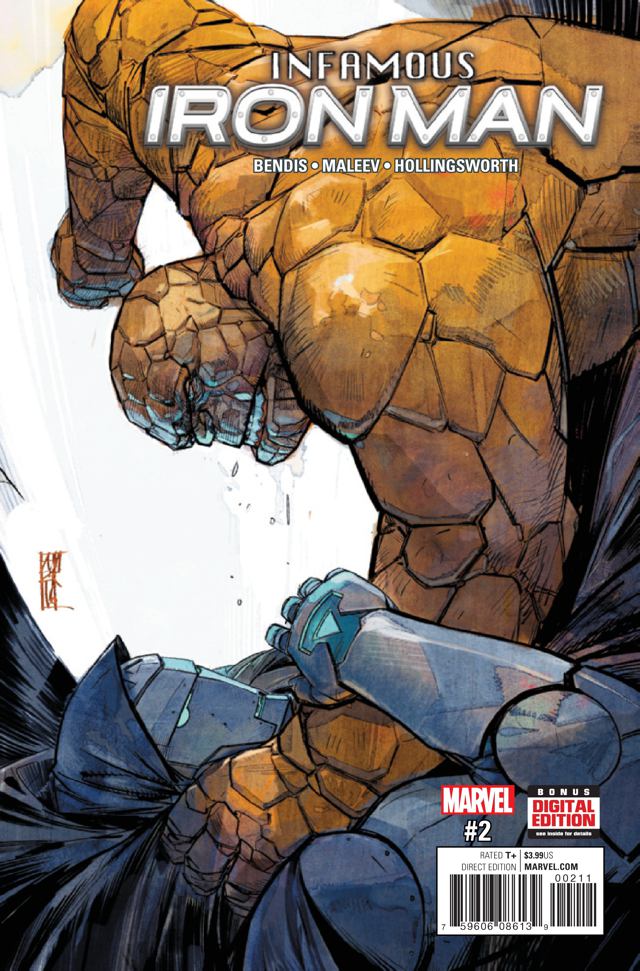 I figure Ben Grimm’s about a 1000 pounds, right? Gotta be something like that. Rock isn’t light, that’s for sure, and he’s typically drawn as a pretty huge guy…

ANYWAY. The past comes back to haunt Victor Von Doom as his quest for redemption continues. The question in Infamous Iron Man #2 is, though, has he gone to far to ever earn the world’s trust?

Bendis builds this issue nicely, giving readers some solid scenes of Iron Doom whooping ass, being off balance and seeing the business end of the karma stick for things he’s done in the past. Bendis shows Doom in a surprisingly vulnerable state, but it is written so well that you can buy it as a natural progression of where this character appears to be going. He’s still the smartest man in the room and the first person to tell you that, don’t get me wrong, but there is more to Bendis’ Doom that his past, that is for sure.

The characterization of Doom in this comic reminded me of Hickman’s work with the character in the FF series. His interactions with Valeria show a softness that mirrors his dialogue with Amara and I was genuinely entertained by their interactions. While I love the maniacal God Doom of Secret Wars, there is a charm to this take on the character that has won me over. He’s still insanely powerful and tolerates no bullshit, but I’m for this Doom being on the side of good. When it’s written this well, we all should be.

Bendis has always been skilled at writing Ben Grimm, and this issue gives The Thing a lot of screen time (which is a good thing – ha! pun). His time in Latveria while hunting for Doom is fantastic and brings a lot of humour to this title, which I didn’t anticipate but greatly appreciated. I applaud Bendis for bringing Doom’s lengthy list of misdeeds back to haunt him, and calling on the literally decades old feud between the F4 and Doom is a smart move. Readers are rooting for Victor, but this is no grudge to just easily toss aside. He captures the hurt in Ben at the present loss of the F4 nicely, and how it’s got Ben ready to let out his anger with his fists.

Alex Maleev’s art is rock solid from the first page to the last. He captures this new era of Doom magnificently with his facial work and the way he has integrated Doom’s armour with the Iron Man style is great. I love how he uses shadow in this issue and his take on Ben Grimm is great. I’m very picky about my Ben Grimm artwork and Maleev passed the test here. Matt Hollingsworth colours set the perfect mood for this story, shrouding Doom’s world in darkness without being murky and damning the character as being evil. He takes Maleev’s pencils to the next level and the net result is a comic that looks damn fine.

Infamous Iron Man #2 was a great read. Sure, I’m a Doom fan, but I’m also a damn picky Doom fan and this is passing the test. Keep this infamy coming, I’m looking forward to seeing Victor and Ben throw down.