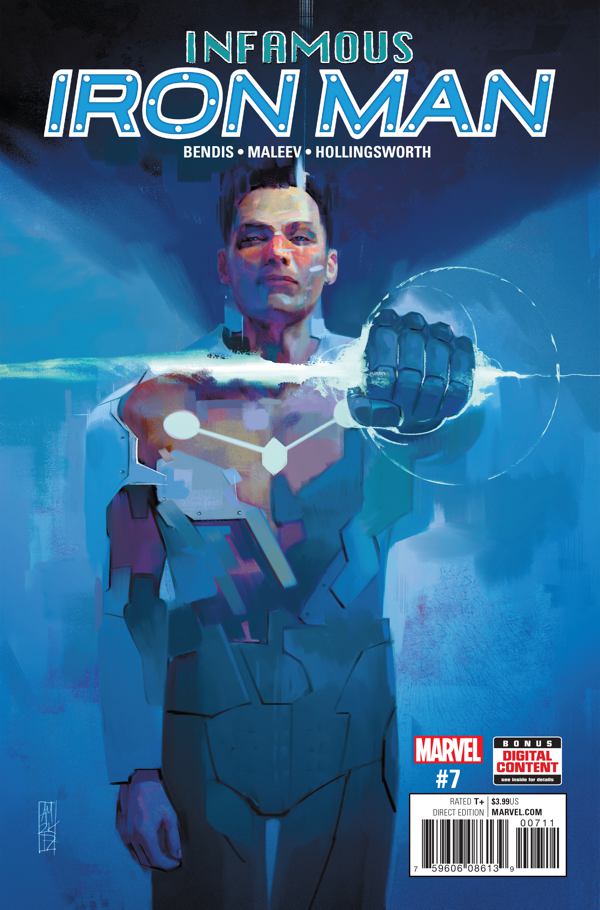 Doom’s quest for atonement continues in Infamous Iron Man #7, an ongoing journey that is digging deeper into this complex character than we have ever seen in the past.

While I am enjoying this series immensely, there are aspects of this issue that soar and others that drag. The issue opens with a scene we’ve all read a dozen times, The Hood attempting to martial b-list and c-list villains into a group to take on their latest fear (Iron Doom), which is pretty flat and lifeless. Considering the outcome of the scene, it lasts for several pages too long, and starts the issue out with a thud. I’ll admit that some of my apathy to this scene revolves around being tired of this dynamic with The Hood, something it seems like Bendis is always trying to make work that nobody cares about anymore. When this scene comes to a conclusion, however, the rest of the issue takes the ball and runs it straight to the end zone.

The dynamic between Doom and Ben Grimm in this series has been fantastic and Bendis’ conversations between the characters are gold in this issue. Of all the Four that you would never expect to have any kind of breakthrough or burgeoning relationship with Doom, Ben is the last in line but as these two talk between blows as this series goes on, the layers of depth in their complicated relationship are being revealed in an awesome way. The pages with Ben are where we dig deeper into what the hell Doom is doing, and they are Bendis’ strongest writing. Continuing this thread and level of writing (which seems plausible considering the cliffhanger) and Infamous Iron Man is going to continue to be one hell of a series.

Alex Maleev and Matt Hollingsworth are consistent, and a solid art team to tell this tale. Maleev deals in the world of shadow and blurred lines, which is a perfect fit for what Doom is right now. Is this his greatest deception ever, or has he actually changed? Maleev captures this emotion well in his pencil work. Ben’s “teddy bear” side of his personality is not captured as well, those big baby blues don’t hold as much emotion with Maleev’s style as they do when penciled by some other artists, but at no point does the art drop the ball as this story is unfolding.

Hollingsworth’s choice of palette suits the story well, and he has an obvious comfort working with Maleev’s pencils. The two set an emotional tone for the issue with is unique, certainly within superhero comics, and Infamous Iron Man is a unique comic because of that.

This issue features some of the flattest storytelling in the series so far, but finishes strong with some on point with some great interactions between Ben & Doom, with a solid cliffhanger to cap it off. If this is Infamous Iron Man at its slowest, then count me in for the rest of this run, no matter how long it lasts.