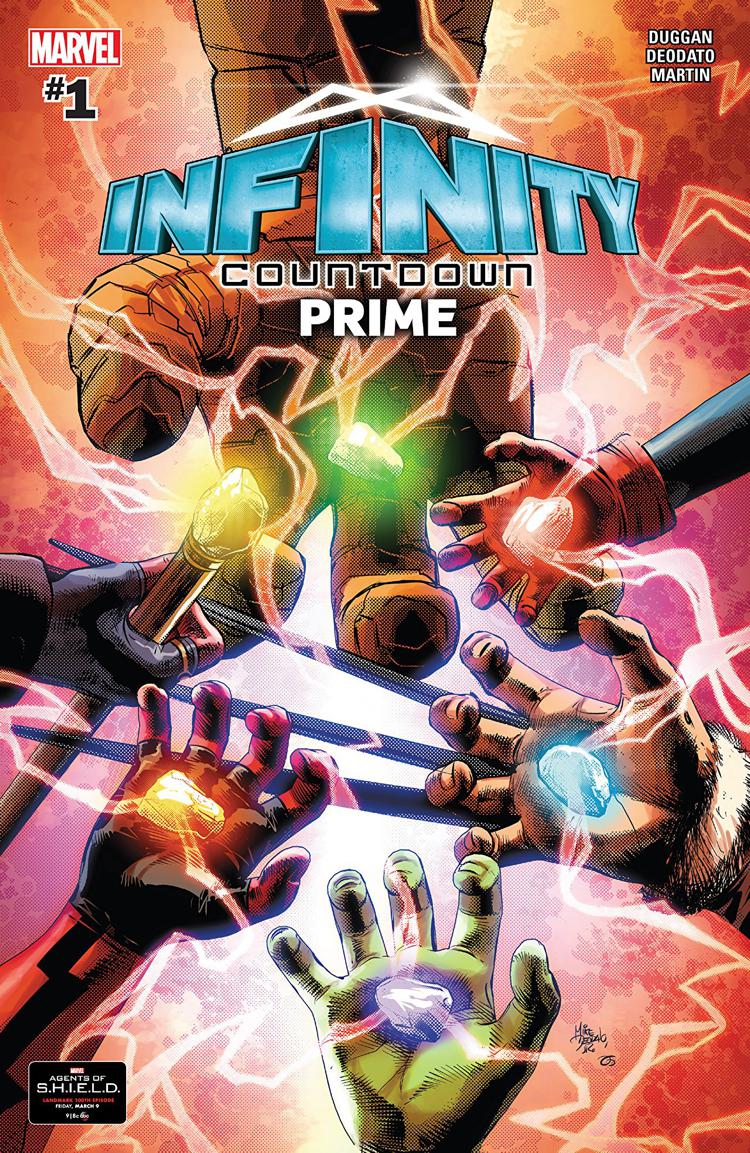 Infinity Countdown Prime #1 is a fine primer for the next Infinity Gems/Gauntlet/Stones event. Written by Gerry Duggan with art from Mike Deodato, Jr., colors from Frank Martin, and letters from Cory Petit, this comic is the Infinity Stones version of a field guide, with supplemental pages following the story that pulls readers out of the Infinity Countdown prelude and sets the stage for the true event.

Those supplemental pages are a nice add-on for this story, giving readers a rundown of the Infinity Stones’ history, “owners,” and skirmishes caused by both. Coupled with a diagram of the “Infinity Circuit” on the first page of this issue, those pieces alone will be enough to keep readers studying and speculating.

The story in Infinity Countdown Prime #1 is a tale that bounces across the Marvel Universe and checks in with an assortment of Marvel icons that range from Adam Warlock to Ultron and back around both edges. There’s no shortage of oddities for Deodato to draw, and he does a solid job through the whole story, even going so far as to drop in some Easter eggs and teases (check out the Captain Marvel pages) along the way. Deodato has taken to using a grid on pages, frequently dividing and sub-dividing panels to mince the story flow into slivers, making each panel a virtual story in and of itself.

Deodato angles the grid to accommodate the action, with wilder angles emphasizing greater intensity in Duggan’s script. I can only imagine the combination of angle and grid causes some challenge for comic reading applications, as many of the grids lose right angles in the more dynamic pages. Frank Martin accommodates the diverse locales and characters in Infinity Countdown Prime #1 magnificently, and even works through the grid lines with solid, anchoring, non-distracting color choices. Deodato and Martin work nicely together, each using tools and choices that accentuate the others’ abilities.

Cory Petit nails the word balloons in delicate pivot spaces throughout the story, but never loses track of the flow. The cast of characters gives Petit a full day’s work with word balloons that range from extreme alien to mechanically measured and even Asgardian aristocracy. His choices are as smart as Deodato’s and Martin’s, and Duggan is smart enough with the script to give readers a nice balance of effort from all three creative collaborators.

The story itself packs enough surprises that make me wonder how Infinity Countdown proper will launch, and what readers might think of the changes enacted here, prior to the series’ opening. Those events keep the story moving quickly, while the widespread cast makes the action hop throughout the Marvel Universe. I’m sure Infinity Countdown #1 will vary the cast of characters a bit, but the start of this saga is a unique assemblage that calls back to previous Marvel events, but juxtaposes them with a quest that is itself familiar, just from a different point of view. And that, my friends, is where Infinity Countdown Prime #1 distinguishes itself: it’s a familiar tale, with a familiar cast, but from a different point of view that isn’t so familiar. Infinity Countdown has the potential to impress or to simply be a retread. After all, how many Infinity Events have we had? I’m hopeful for the former, and this issue makes a very strong case for readers to look forward to what’s next.