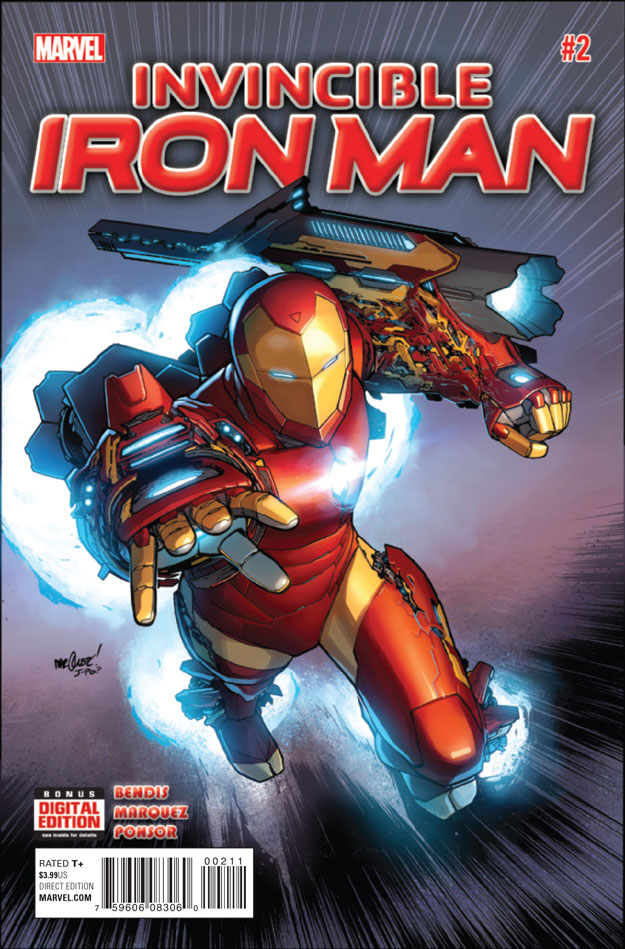 After the epic final page of the first issue, I was very happy the delay for issue #2 wasn’t going to be long. I’m happy to report that the All-Star team of Bendis and Marquez does not disappoint…

Brian Michael Bendis’ greatest strength as a writer is his dialogue and this issue is full of some great banter between Iron Man and Doctor Doom. This issue does seem to step into spoiler territory for the woefully delayed finale of Secret Wars, but at this point I’m not even sure I care with the momentum of the new Marvel books. That said, Bendis alludes to events rather than explicitly describing them so readers can maintain some level of ignorance about the mega-event’s conclusion. Doom is a brilliant foil for Tony Stark, his equal in every way (ego included) but throwing the Iron Avenger for a good loop on pretty much every page. The two characters have great chemistry as written by Bendis and I look forward to more of this dynamic duo.

Bendis has crafted a solid first foe for Iron Man as well, with the oft-seen-but-never-quite-this-dangerous Madame Masque. She’s as capable as ever and plays a different sort of strong foil for Tony, with a sinister plan that has me intrigued. Marquez’s work captures the dangerous side of Masque very nicely and elevates her to a top flight villain and actual challenge for Tony.

Speaking of the mighty Dave Marquez, he fills this issue with more amazing work. The tone his work sets for this issue makes Invincible Iron Man the A-list book it should be and each page is damn near flawless. His character work is fantastic and the details in Doom captured the character’s personality while not tipping their hand as to his stance in the Marvel U at this point. The armor looks damn good, which is a huge part of an Iron Man comic, and this is really a fabulously penciled superhero comic.

Bendis and Marquez are a great team and I thoroughly enjoyed Invincible Iron Man #2. With these first two issues, this series already feels like a flagship or anchor book, a top flight piece of the Marvel Universe that is a top 10 worthy comic. This is a fun superhero book with entertaining dialogue and marvelous art and I can’t wait for issue #3.