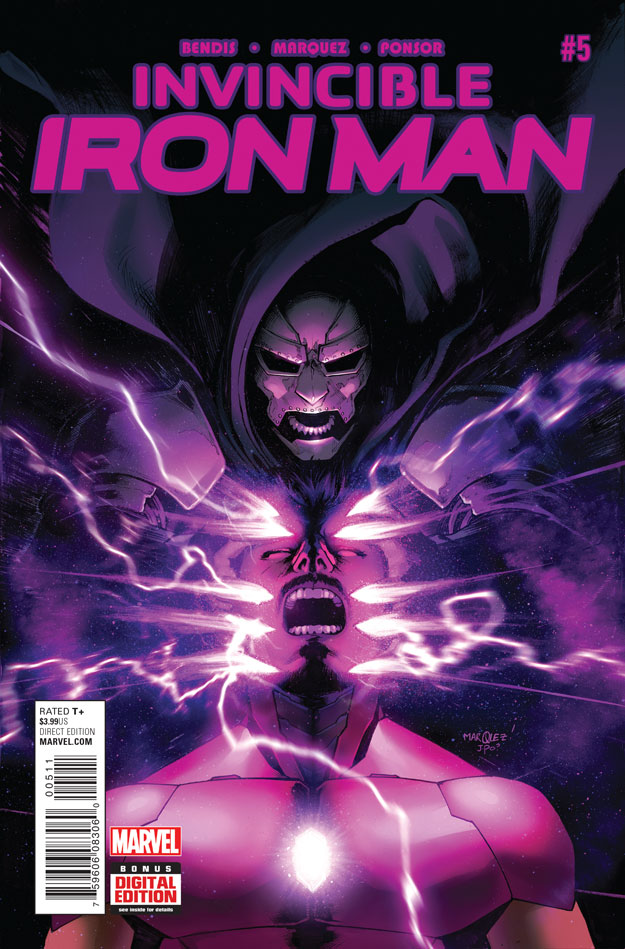 Brian Michael Bendis is great with these characters, and this issue is really all about them. There’s some action for sure, in the form of a battle between Madame Masque, Iron Man and Doctor Doom, but the best part of this issue is the dialogue. I am enjoying Bendis’ interpretation of Tony Stark very much and he’s got all the right kinds of attitude in this issue. Bendis taps into Tony’s arrogance well, having the battle not progress in a linear way and having Tony need Doom to take on Madame Masque. Elevating her character to a power set to require both the tech wizard and a master sorcerer like Doom is a great storytelling maneuver and the battle between the three is quite enjoyable. The ongoing banter is great, and when Tony interacts with characters in this comic, good things happen. While the resolution of this arc may have been telegraphed and slightly predictable, the ride to the end in this issue is quite enjoyable.

David Marquez and Justin Ponsor are titans. They are one of the strongest teams in comics today, and Invincible Iron Man #5 showcases why. This team makes every single page look stellar and the battle that occurs in this issue is a thing of comic book beauty. Marquez’s pencils are flawless, Ponsor’s colours are electric and the issue soars from the first page to the last. Ponsor does a great job of showcasing the power of magic in a different manner than Tony’s “tech” based power, and through the use of colour alone it is very obvious how the battle is flowing and what sort of powers are erupting inside MJ’s club. His work strengthens Marquez’s damn good art and the two are one of the most in sync art pairings in comics.

Invincible Iron Man #5 is a really good superhero comic. This team is strong and they know how to weave an entertaining tale. Bendis’ character work is fantastic and Marquez and Ponsor deliver on the visual side to create a total package that is worthy of being a top 10 book. It’s been awhile since I was excited to read an Iron Man comic, but this team has changed that for me.