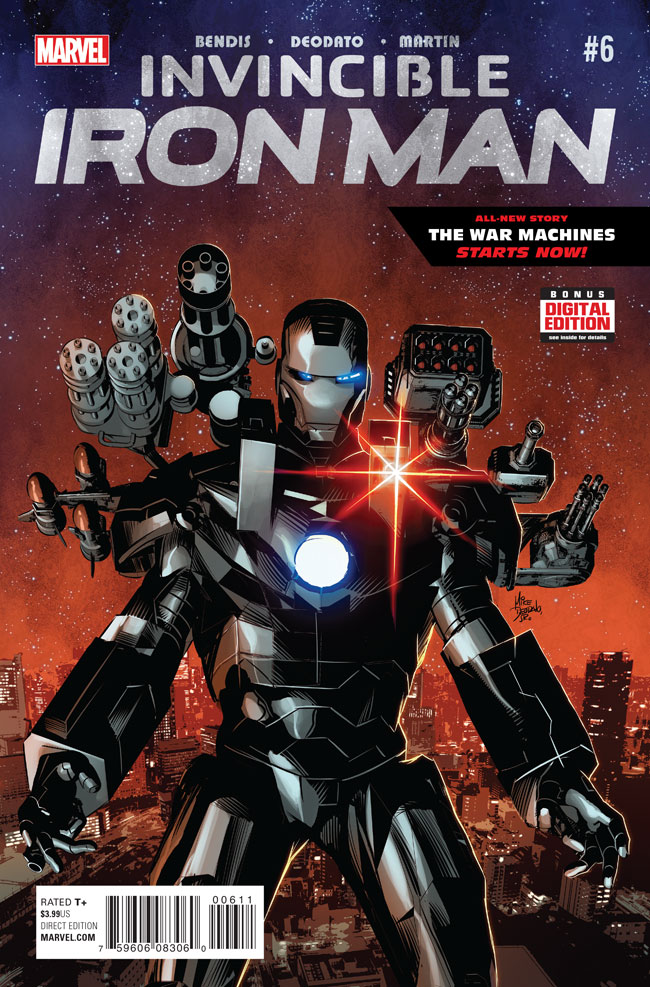 The second arc of Invincible Iron Man picks up pretty much right where the last left off, but with a different visual tone.

Brian Michael Bendis’ work is consistent with the last arc, and I enjoyed the pacing of this story. This isn’t the most action intense issue, it feels a bit like some down time after the intensity of issue #5, but not in a bad way. This allows Bendis to put these characters at the forefront, with their dialogue stealing the show, especially when Tony’s new best buddy, Victor Von Doom, comes to town. The addition of Doom to Tony’s cast rounds out this character in a way I never realized was missing from my enjoyment of Tony Stark stories. Doom isn’t his friend, like Rhodey, he isn’t a romantic interest, and he is Tony’s intellectual superior. This allows Bendis to do some great things with Tony and I really enjoyed the interactions between the cast in this issue.

Mike Deodato takes over from David Marquez on art duties, which is a dramatic visual shift for the series. Deodato’s art style relies heavily on shadows and his work, with Frank Martin, is much darker than the Marquez/Ponsor tandem. In some ways, I don’t feel the tone of the visuals fits this story. The outset of the issue, featuring Rhodey, is appropriately in the dark, but the rest of the issue with Tony feels like a mismatch between script and visual tone. Looking at the artwork, I expect this to be a story of Tony’s drunken days, but it is not. This story is, for the most part, very “MCU” in the manner of being bright, light and bombastic. This is some fun, witty, big superhero stuff, not a story of Tony living in constant shadow.  Deodato’s artwork isn’t his sharpest, either, with issues becoming apparent whenever he pencils a female character. The anatomy is iffy at best, and awkward at it’s worst. While Bendis and Deodato certainly have history with their work during the New Avengers/Dark Avengers run, the story just does not fit the visuals here, and the visuals are not strong enough to own the story and enrich the tone.

Invincible Iron Man #6 is not a bad comic, but it is a downgrade from what we’ve seen in the series so far. The writing and art battle to control the tone of the comic, and Bendis’ work is the strongest part of the equation. Deodato’s work actually detracted from the story for me, which hurts the issue on the whole. From a character & writing perspective this is still a must-read for me, but I’ll be looking for stronger artwork in issue #7.