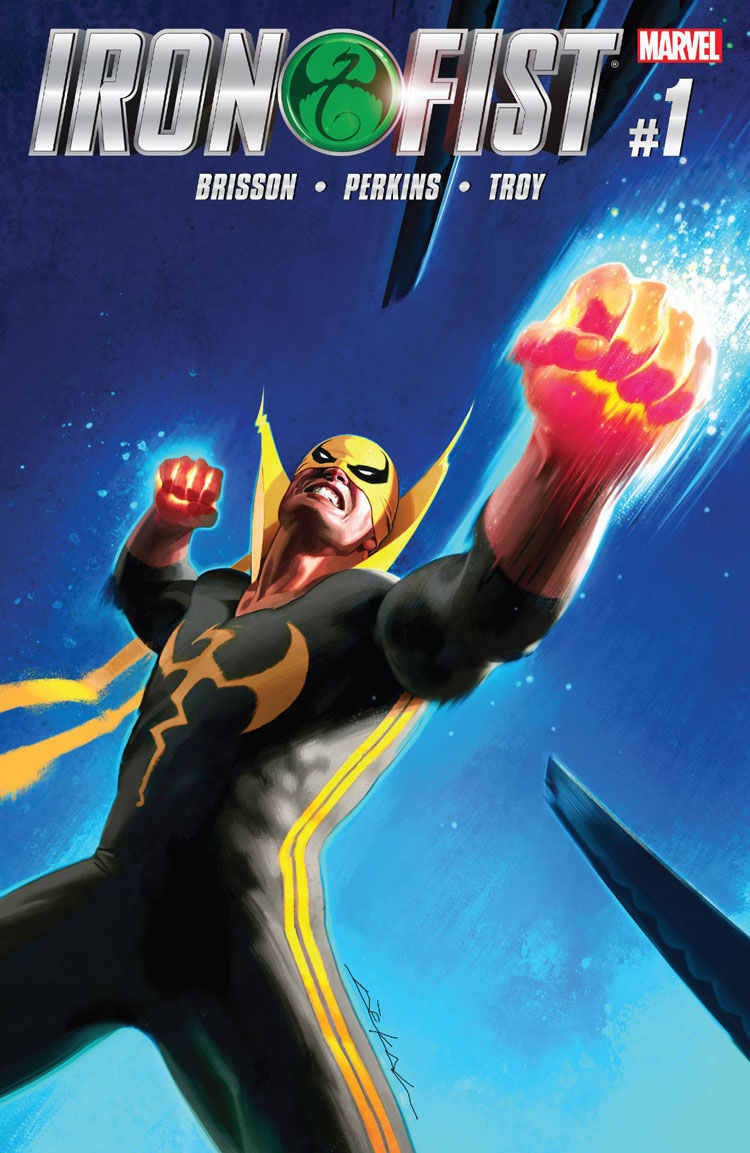 Punch up, not down.

Danny has lost his connection to the energy that fuels the Iron Fist. Without K’un-Lun, without the Fist, he’s lost and aimless, wandering the world for a challenge. In a seedy bar, he finally finds it, as well as the invitation for something that could revitalize him, whether in body, spirit, or both.

It’s become clear to me that I didn’t know as much about Danny as I thought. Even though the series starts well past a lot of important context, Iron Fist #1 is still interesting. What we see is the darkness of Danny and his loss manifest. He’s wandering around in the shadows as a shadow of himself, and every part of the world around him is reminiscent of this.

For an introduction, this issue is quick and dirty, with just enough action and background to make this first arc believable and worth reading.

There are so few words in the first pages and I love it. From the get-go, Ed Brisson sets up a story that is meant to be thoughtful and morose and everything is the better for it. The dialogue-less narration pages add to this impact as we see just how hard Danny has tried to reclaim something for himself. Because of Brisson’s style, I was far less worried about mythos because I was drawn into a story that discusses the depth of experience and pain

Mike Perkins makes you feel every punch and Andy Troy puts you into Danny’s stream of thought. Perkins draws a heavy, dismal environment, illustrating the dank corners Danny has explored to get part of his life back. Troy creates and relentless darkness and is not afraid of working with shadows and dark colors. This duo is ace on execution, and without their talents a huge portion of Iron Fist’s impression would be lost.

I’m actually sad for this series because of the timing of its release, as that could hurt what is otherwise the start of a good story. The premise is pretty run of the mill, but it’s at least engaging and the cultural appropriation is not as blatant, divorced as much as it realistically can be given Danny’s origin story.

What I like that it is a story about loss of something vital, as Danny has come through life and death with the use of the Fist. Without it, who is he? Such a question carries a meaning for him in this story and the larger cultural narrative beyond the pages of this comic.

I may not be firmly settled on Iron Fist #1, but I do think the series could tell a story that’s helpful for Danny as a modern character. His roots in K’un-Lun (K’un-L’un? Kun-L’un?) may actually be of interest to avoid, but it seems like he may be headed into a territory where his questionable origins are less at the forefront than this current story.

Danny is moody and so is his environment, and how the team works together to portray this could mean they are on to something. There may not have been major surprises, but there is an undercurrent for this story that plays on a different kind of human grief.