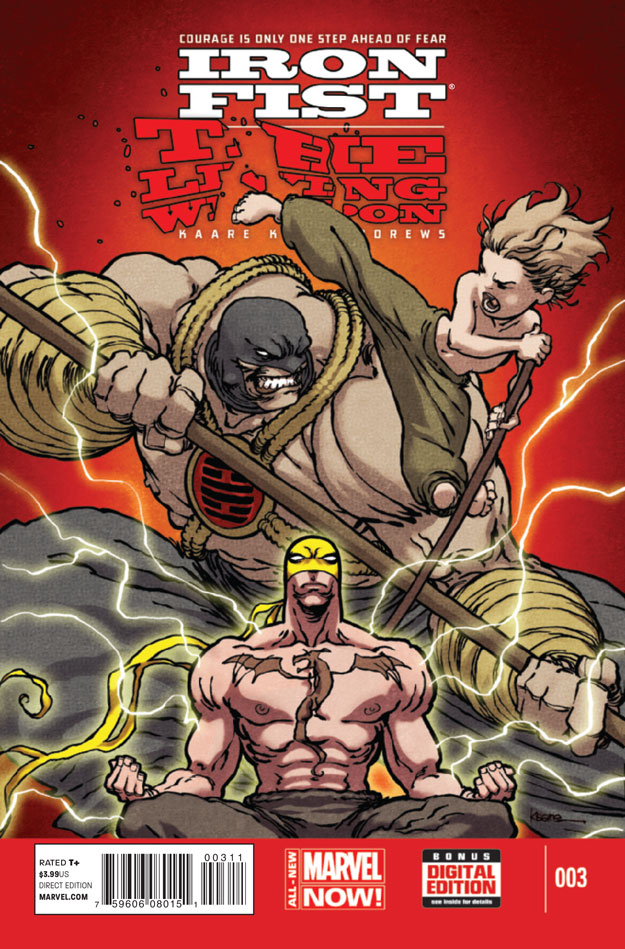 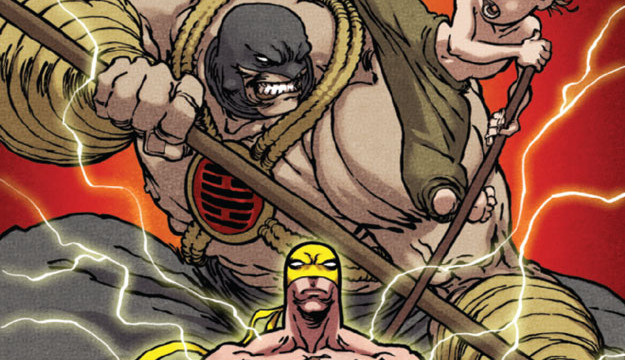 Iron Fist: The Living Weapon #3 continues Kaare Andrews’s take on Danny Rand aka Iron Fist. It’s a take that is definitely a dark one and it continues to be a deep examination of the character steeped in lore and mythology. This issue delves more into Danny’s past, a past that was spent in K’un Lun, the city of immortals. Kaare Andrews is a one man band on this book handling both words and art duties and it’s clear that this is a character that he holds dear. This book has a very dark tone. In fact it’s so humorless and self-serious that it walks a fine line for me. Luckily the story is so compelling and the art/action sequences remains absolutely spectacular that it still has me hooked. Kaare Andrews has turned Iron Fist into a dark martial arts fantasy, removing Danny Rand far away from the Marvel Universe and building a delightfully unique world.

Kaare Andrews is crafting a dense story, drawing on the past while pushing the story forward. The series starts with the tragic death of Danny’s parents as they search for the mystical city K’un Lun. Following their death Danny is adopted by Lei Kung, The Thunderer. Lei Kung trains him in K’un Lun to be reborn as Iron Fist. Years later he abandons the city of K’un Lun to seek vengeance for his parents death. Now something has drawn him back to K’un Lun. When he gets there it’s in ruins and he as many tough decisions in front of him.

Danny Rand is a compelling and complex character. I particularly enjoy the sequences where we get to see his childhood. In this issue we see him training with Lei Kung. The thoughts of Danny realizing he is the embodiment of death overlay the art. It opens the book and it provides great context for when Danny returns to K’un Lun later in the issue. He had a childhood shrouded in darkness and it informs greatly who he is today. Throughout the issue it also cuts to Danny’s girlfriend, who is watching over the young girl from K’un Lun that was sent to tell Danny to come home. These scene take place at a hospital and is devoid of the mystical backdrop most of the issue takes place in. This provides a nice contrast to that mystical world. When evil characters show up there it’s exciting to watch sh** hit the fan. Also, there’s a team of sexy ninjas in nurse outfits. This is fitting for a book that is turned to 11 constantly.

Kaare’s art is moody and kinetic. He draws his action scenes with a great sense of movement, and honestly it looks the best when characters are in motion. He captures faces really well, making you feel every punch thrown and received. He also implements a great use of shadow in his work. For example, on page one Lei Kung stands in one panel with his entire face blacked out from shadow with the exception of his eyes. The whites of his eyes stand out, leaving the reader wondering what’s going on behind them. He uses this technique a lot and it does a great deal to enhance the dark brooding tone of the book.

Iron First: The Living Weapon is a great martial arts comic book. Issue 3 maintains the high level of quality, providing more looks into Danny’s past. The issue ends on a great reveal that only makes me more excited for the future of this story. Kaare Andrews is giving readers a layered, action packed, and unique Iron Fist book that is unlike most books on shelves today.