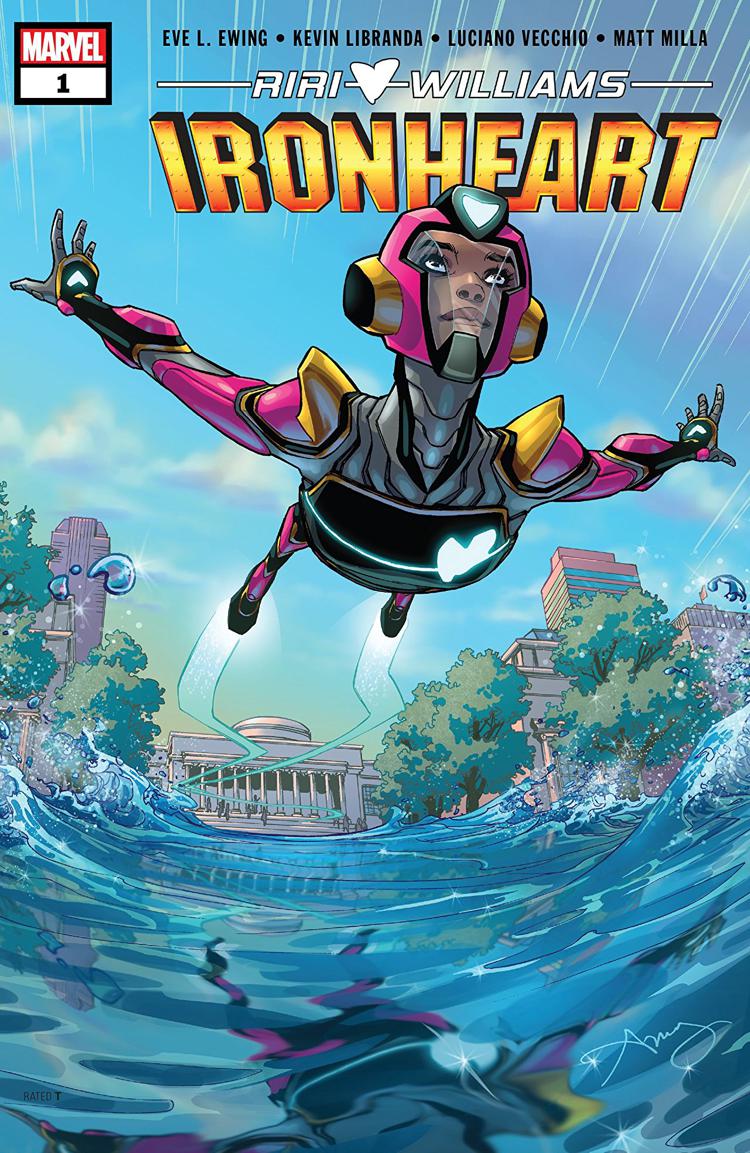 There’s a different type of Armored Hero on the scene and her name is Riri Williams! In the wake of appearing in Invincible Iron Man as a young woman inspired to create her own Iron Man armor, Riri has blazed a trail all over the Marvel Universe as a next-generation Hero. Her next step? Starring in her own series to continue her adventures as Ironheart! The beginning of Riri’s next phase of life begins here and Eve Ewing gives us a debut that continues our heroine’s journey and everything people like about Riri.

Ewing gives our main character a breath of fresh air from the get-go in the opener. Ewing’s writing understands Riri, her struggles and concerns with being a Superhero, her upbringing as a black girl in Chicago, and the world’s she’s quickly pulled into by being a budding Superhero. Libranda and Vecchio’s pencils are inviting and make the panels zoom by just as Ironheart does. There’s attention to detail every step of the way as Riri touches down at MIT and her armor depowers and retreats into her clothes as the panels go on. In this #1, Ewing grabs the corners of her character that make up her story going back to her time in Invincible Iron Man. Similar to Tony Stark and his time in Stark Industries when he has to play businessman, MIT is not just a location but a place that holds story and complications for Riri as her lab gets invaded by World Leaders that want to see the young woman’s laboratory in action. Having made her initial Iron Man armor on the property of MIT, being outfitted with a lab to continue her work and it’s here Ewing delves into the sciences and technological side that appeals to our young protagonist. Libranda and Vecchio make the most of the pages, keeping Riri at the center and surrounding her with the wide-eyed businessmen and women. Ewing writes circles around the competition when it comes to the scientific wonders, you can tell Riri has an infectious and detailed energy when it comes to inventing things for the betterment of exploration and whatever else is being made in her lab.

Being the new kid on the block comes with people trying to figure you out and Ewing puts our Hero through concerns both relatable and larger than life. Her origin is rooted in the gun violence of Chicago and that continues to stay with her throughout the issue. Ewing’s writing of Riri zeroes in on how the character has appeared since her inception but the balancing act of being a teenage genius and having normal relationships is something Ewing is striking in the thirty-six-page opener.

Whether it’s fixing her gear or figuring out relationships with fellow MIT students, they’ll always be a need for Ironheart and her debut battle is something to behold as our hero goes about the battle the only way she knows how. She thinks to herself as she assesses the situation, completely breaking down what’s going on and what she can do to stop the foe that strikes up an interesting connection between the two of them. The battle puts Geoffo and Milla’s colors on full display with Ironheart’s armor looking great as she zooms and blasts her way into defusing the situation and rescues the hostages. Cowles lettering has a lot of work to do with lots of word balloons filling the page in the midst of battle. The panels have a lot of small details that make you feel apart of the book as Ironheart analyzes people and details that lead her to victory in her purple viewed perspective from her armor. The art makes every panel sharp and clean with Riri not taking down the foe in a typical manner, but thinking her way out of it, almost passively. The suit is great on the eyes as time goes on and it’s in thanks to Libranda who spent time with the suit in Champions, Geoffo and Milla make the suit an eye-catcher no matter what’s happening on the page.

Ironheart #1 ends on a heartfelt note, bringing all the parts to Riri’s life to an end for the issue, in an almost three part act manner that involves her simply talking to a boy on Facetime. Libranda captures the facial expressions teenagers go through as the conversations turn goofy, serious, nerve-wracking, and shocking all in a panel to panel basis. Ewing slows the story down to dig into Riri’s life behind the armor and it’s one of the things that make Ironheart not only an appealing character but makes the exploration of the different sides worthwhile. A young hero has a lot of balls to juggle and Ewing spending time with each part gives Ironheart continued fleshing out and a lot to explore down the line. Marvel has a winner with the beginning to this Chicago Sweetheart’s story with the #1’s deepening of Riri William’s world with an interesting last page that brings home a lot closer to her Superhero Career. Ironheart #1 combines sleek and expressive art with a writer that understands the character bringing a sense of relatability to the deeper sections that are spread throughout the book.