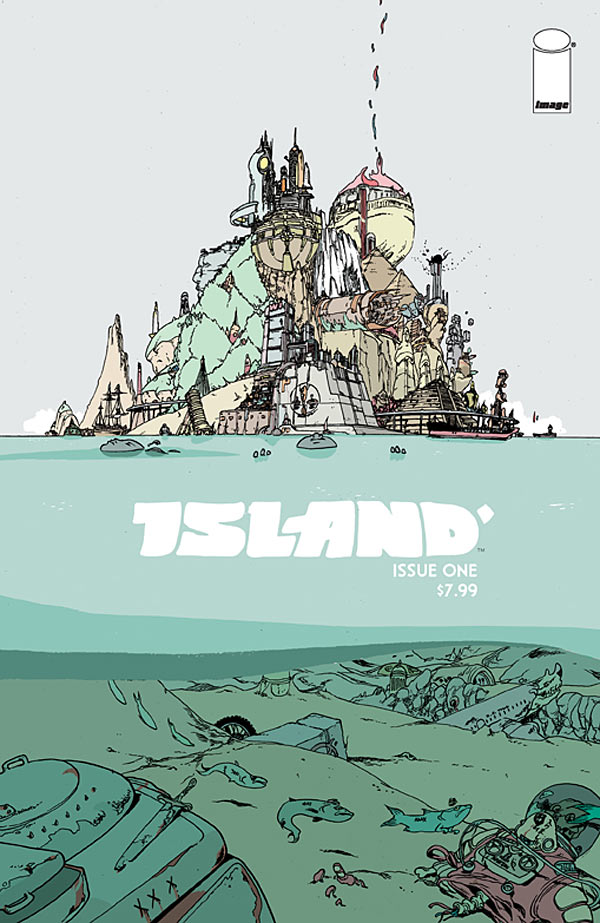 Island is one of those projects that, based purely on premise, you just have to see for yourself. The idea is: a serial magazine, carefully curated by Emma Rios and Brandon Graham, that contains everything from single-issue stories to ongoing narratives to prose. Basically, it’s that zine you dreamed about doing with your group of artist friends in high school — except Graham and Rios got it done with a major publisher. It’s ambitious to say the least and the idea of something like this finding mainstream success is thrilling.

Because this is a big project — some 100+ pages, in fact — I was initially at a loss in terms of how to review it. I thought, at first, that I would just break the pieces up and talk about each one individually, but something is lost there, right? $7.99 is a pretty good deal for over a hundred pages worth of comics, but what if you only like one of the included stories? And what if that story was a one-shot? With a format that contains multiple narratives packaged together, these questions are worth considering — especially as it pertains to whether you want to keep going with it and how patient you want to be. So, I’d like to talk about the whole Island experience as best I can while occasionally stratifying my thoughts with each narrative.

I’m actually going to confess that my favorite selection was Kelly Sue DeConnick’s “Railbirds,” a prose eulogy to American writer and poet Maggie Estep. There are some illustrations by Emma Rios included, but the force of the piece comes from DeConnick’s words and it is absolutely not a comic, so I don’t know what it means that I liked it the most. It was an affecting, personal piece that hit all the right notes at the right times—pretty much flawless. And, because her piece was a eulogy, I knew immediately knew how to approach and frame it. This was much less true about the other selections.

Frequently, I couldn’t be sure whether a piece was meant to be a one-shot or to continue on in a later installment, so reading was a constant state of chaos. Emma Rios’ “I.D.,” could easily have been a one-shot piece, while Ludroe’s “Dagger Proof Mummy” could have been an ongoing — and yet the opposite is true. Both were mostly strong pieces — “I.D.” had some wooden/unnatural dialogue; “Dagger Proof” had a unique world/setting, while the themes were a bit saccharine — but their strength is mitigated when I’m distracted by the unclear structure. Am I reading this as an opening phrase or a single movement? Am I meant to accept a lack of plot clarity or expansion in exchange for emotional content or does it make sense for me to demand more?

There’s part of me that wants to say definitively that this isn’t a good thing and diminishes enjoyment of the work. There is a whole other part that suspects that this is part of the intended Island experience and that, perhaps, I need to retrain myself to accept narrative uncertainty and rethink how I read comics. After all, a big part of this work—at least as I see it—is a rejection of current comics publishing practice. So perhaps the point is for me to let go of my current method.

But then there are other problems. Beyond the structural confusion, very often I simply had no idea what was going on. This was particularly true with one of Graham’s pieces, an installment of Multiple Warheads. Until I spoke to a friend, I had no idea that what I was reading was actually part of something Brandon Graham has been working on for a while. My friend said that the beginning portion was meant to catch readers up, but as someone brand new, I was thoroughly lost. Not only did I not know whether this was meant to be an ongoing narrative, I also had trouble picking up what was happening and why. There were a lot of things to like about it — the rich setting, the visual puns, the clever details — but it was hard to enjoy them as I tried to parse the plot, significant moments, or how one event connected to another. Without additional context, the piece felt incredibly disjointed and poorly organized. Hearing from Graham fans who have the appropriate background, it seems that additional context was crucial.

Of course, it wasn’t entirely negative. One thing that holds true across all the selections is the quality of the art. One of the hugely attractive aspects about this form is the ability to enjoy a number of different styles within a single compilation and, on the whole, none disappoint.

As confusing as the Multiple Warheads portion was, the art was absolutely stunning, beautifully whimsical, and regularly interrogated the space where comics exists, that is, a form that often straddles reality and fantasy. The best illustration of this is a point when one character calls to another, in attempts to get his attention, and the speech bubble actually taps the character on the shoulder. Meanwhile, Emma Rios’ work on “I.D.” is evocative—though perhaps not allowed to reach its full potential in a single color, as it sometimes made the movements hard to differentiate. Lastly, the heavy lines, effective use of shadow, and the grey/blue/brown aesthetic of Ludroe’s “Dagger Proof Mummy” showed a lot of impressive restraint and control.

I’ll also take a quick moment to talk about “Polaris,” my favorite comic in this first installment. This one is also by Brandon Graham, but it’s a comic about process, perspective, and rule-breaking in art. The piece actually somewhat exemplifies what I was expecting with Island — fresh topics approached with unique vision in an accessible fashion. It’s a really creative approach that does my favorite thing — capitalizes on what comics can do which no other medium can. And that, more than anything, was what I wanted to see in the pages of this magazine.

Ultimately, my experience of Island was a rather alienating one. I picked up the book based on effusive reception from peers and other critics, without realizing that there was assigned reading. It turns out I might have realized Emma Rios’ piece was one of at least two parts, if I’d read interviews. Or I perhaps should have known that Graham’s work would be pulling on previous material based on related press releases. But, coming into it as a completely fresh reader, I’ve found that Island #1 has left me at sea.