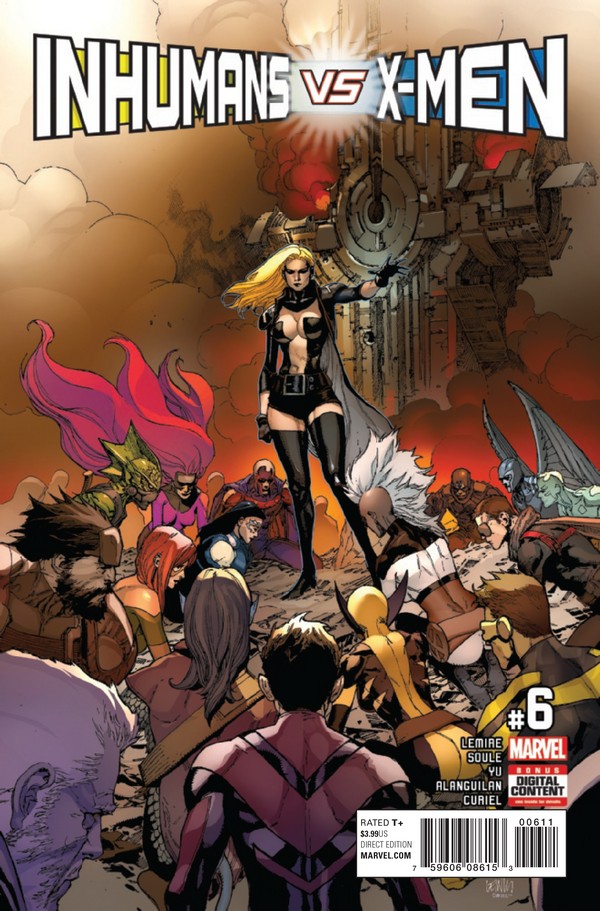 It’s perhaps the most classic of all comic book tropes. Two super hero teams have a misunderstanding and beat the hell out of each other before realizing their error and promptly team up to take out the actual threat. Comic fans no longer resent writers for constantly rehashing this dynamic. At this point, it’s tradition, not cliche. But when characters on both sides come out of the ordeal looking foolish and underwritten, such as the case with Jeff Lemire and Charles Soule’s Inhumans VS X-Men, one has to wonder if enough time was spent developing an actual conflict before pitching the idea of these two groups going to war with eachother.

“Why didn’t they just tell us? We would have found a solution.” When one of the main characters expresses this amidst the final pages, it’s hard to deny that this particular crossover was anything other than editorially mandated. And it makes sense. Comic conspiracy theorists have claimed for years that Marvel has slowly but forcefully trying to replace their merry mutants with Inhumans, favoring them because they own their movie rights while X-Men will be owned by Fox for many more years to come. Whether it’s true or not, playing off that fear with a crossover was a no-brainer. Getting to this point was a slow burn, the Inhuman threat to mutants was first introduced way back in 2015 during the All-New, All-Different Marvel relaunch so it’s disappointing that the final result was so, well, simple. As has become the trend, the tie-in issues are where the meaty, character-driven, thought-provoking stories were told where the main crossover book was six crowded issues of one-dimensional characters punching each other. One character in particular that suffers from plotting an event this way was Emma Frost.

Gone from the X-Books for the better part of the past year, Emma came back in a big way to lead the fight against the Inhumans. It’s a shame that we had no tie-in issue to focus on Emma because with so many characters to juggle, Soule and Lemire never really get a chance to explore her motivations. Instead of seeing Emma, heartbroken and desperate, taking charge of a difficult situation, she’s reduced to a vengeful maniac. There’s no denying that Emma would want revenge after Cyclops’ death but some of her actions in this particular issue put her squarely back in the role of super villain and after decades of being a hero, having her go back to her villainous roots because of a lover’s death goes against everything Emma stands for.

The idea of two super-powered armies going at each other’s throats is exciting but without the emotional weight or rational reasoning, it comes off as no better than a kid playing with his action figures. What this story needed was less cameos and side missions and more focus on the two characters at the heart of this story: Emma Frost and Medusa. Not only does the story suffer for the lack of focus but the art diminishes as well. Leinel Francis Yu also seems to understand that less is more. His best scenes are those with only two characters fighting eachother, such as Emma and Medusa’s final brawl. When tasked with drawing the fight scenes involving dozens of different characters, he seems less interested so we’re treated to many murky panels with no clear action to decipher. Colorist David Curiel’s colors help matters and it’s thanks to his bright pages that we’re even able to make out the many different costumed individuals doing the fighting.

With the end of this crossover also closes the chapter of the supposed rivalry between the two franchises. Marvel seems to be scaling back on its supposed Inhumans push while the X-Men will be relaunched in a few months with multiple titles. Neither franchise will look back on this era fondly and fans will mostly see it as a failed experiment. The effort by Soule and Lemire is evident but whether their scope was too broad or behind the scenes distractions forced their hand, the result was tedious storytelling and with no worthwhile outcome for either side, this was a war with no victor.