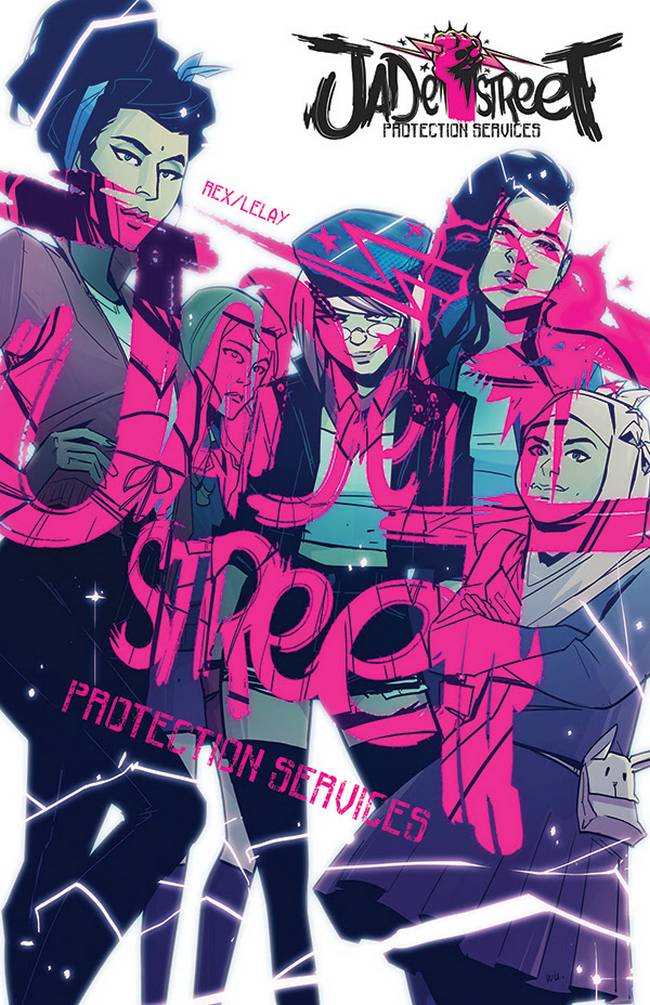 It’s been quite some time since I’ve read a first issue of an all-ages book and didn’t feel once like I was doing so. I constantly start books that I think are all-ages, but then something will happen in the book or someone will say something that will remind me I can’t pass this off to younger folk quite yet. And, when books are all-ages, they are sometimes relentlessly so, pulling me from the book to think about its intended audience. Jade Street Protection Services, however, strikes the perfect balance between shenanigans, action, innocence, and appropriateness, on top of an instantly likable and exciting premise and execution.

Jade Street Protection Services, written by Katy Rex, illustrated by Fabian Lelay, with colors by Mara Jayne Carpenter and lettered by Taylor Esposito follows an unlikely band of magical teenaged girls, trapped in a school that is far more dangerous than it would originally appear to be. When a group of magical girls are sent to detention by their stern gym gym teacher, they decide to skip their punishment for promise of frozen yogurt and kebabs. Upon their escape, they learn of their gym teacher’s nefarious plans for the girls of the school, and get in a devastating scuffle by issue’s end. The conceit of this book feels like equal parts Harry Potter and Sailor Moon, with plenty of mysticism and attitude to keep the urban setting lively.

Each of the five main characters are wonderfully diverse, both in personality, ethnicity, sexual orientation, and appearance. I truly applaud the effort made to create a well-rounded cast of characters, especially done in such a seamless manner. The girl’s are first introduced in an easy to follow manner, with Emma, the narrator, commenting and describing each of the young women. This was a great way to quickly give the reader a sense of who to follow in the next few pages, and provided a useful reference as the story progressed. Other personality traits came out more naturally though dialogue and action, and by issue’s end, I felt I had a solid sense of the cast and could see a friendship budding between them. A small concern, however, lies in the potential for unidimensional characterization. While this hasn’t happened with every character (in fact, at least two characters have shown potential for unexpected traits and depth to their personality), I worry that some of the characters felt a little flat by the end of the first issue.

The story itself, while a bit confusing and jumpy at times, is overall enjoyable and refreshing. The magic is clearly laid out and should provide a lot of great plot over the course of this series. Aesthetically, Fabian Lelay does wonderful work to make this book appealing. The girls are drawn dynamically and uniquely enough to be able to tell them apart easily over the span of the pages. While the first few pages were a little bit hard to trace in terms of what was going on, I think the art quickly fell into step with the writing providing for a smooth first issue. The characters are beautifully expressive and the settings are distinct; Lelay has a tidy style which works well with a large cast of characters. Mara Jayne Carpenter’s colors are clear, looking wonderfully detailed while not appearing to be overworked. Taylor Esposito has a clean lettering style, making it easy to track the sometimes twisted dialogue between the group of girls. Compositionally, this is a great looking book that can only get better as the series progresses, promise and talent evident on the pages.

Jade Street Protection Services is dripping with passion, and it’s great to see a book like this sitting proudly on the shelves. Fans of Gotham Academy and Lumberjanes will likely enjoy this title, but it’s truly fun for all-audiences. I could easily see this as a show I’d rush home to watch after school, even late into my college days. Buy yourself a copy; this is a book you don’t want to miss.