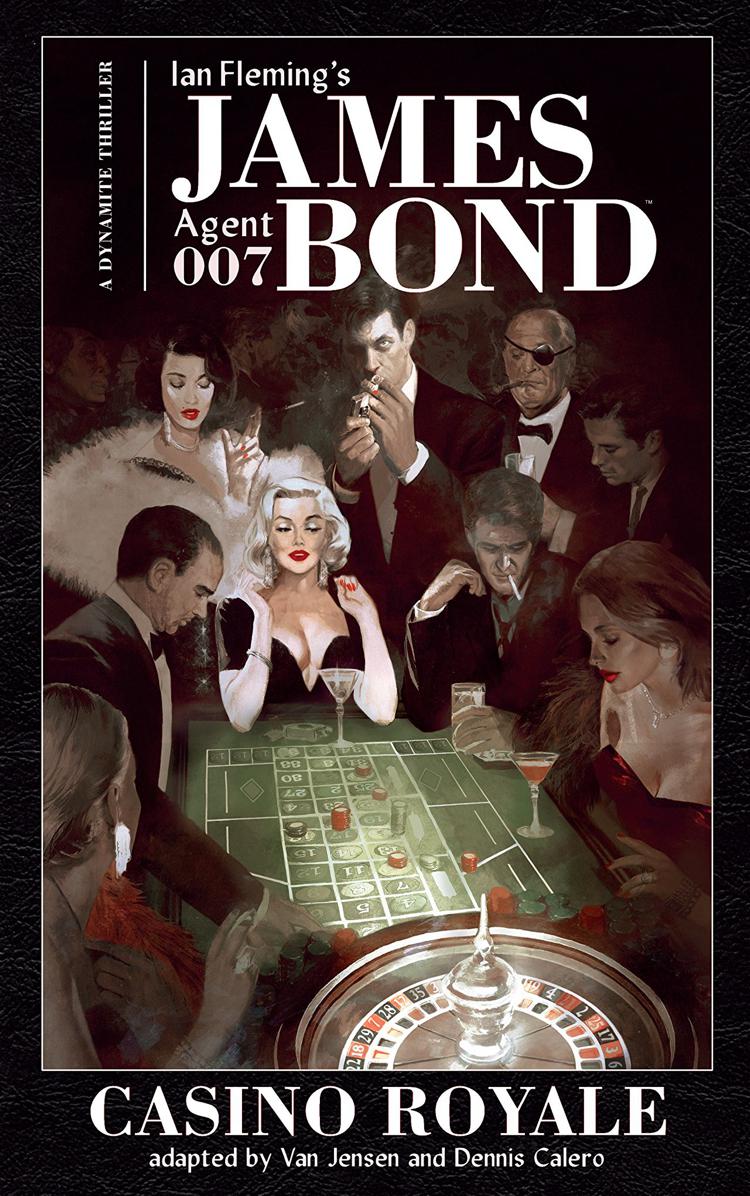 Dynamite begins its long-awaited adaptation series with the original Bond tale. Sent to the Casino Royale in France, Bond is tasked with the unorthodox mission of out-gambling a Soviet agent named Le Chiffre.

This graphic novel adaptation follows very carefully the narrative of the first Fleming novel, without updates, re-imagining, or buffing off the rough edges.

There are some interesting style choices made by Jenson and Bowland, the most notable is the mix of balloons, narrative boxes, and words floating in air directly on the art. The last of these is used to indicate when Bond is analyzing a situation or taking stock of his surroundings. It settles into a nice addition to the story-telling eventually, but I found it quite jarring for a while, particularly when it maxed out at 13 notes on one page.

One of the challenges of this comic, and one faced by any adaptation, is that Le Chiffre’s game of choice is baccarat, a card game almost completely unknown outside of Bond fandom today. As well as being decidedly difficult to explain, baccarat is so challenging for creating visual drama that the most-recent film adaptation swapped it out for Texas hold ’em, a game both better known and more dramatic on screen.

The story has to give over two pages to Bond explaining the game to Vesper, including strategy and scoring, and has to constantly reinforce it throughout the lengthy section involving the play itself.

Calero’s framing within panels is quite strong, finding the movement and the moment. The overall layout is quite conservative for most of the issue. Firmly-lined panels, uniform gutters, and no crossing the panel edge. He does break out a few times during the book, though, and there are some very strong pages, particularly later in the book during the chase and interrogation section.

Bond film fans will take a bit of acclimatizing to the version of the character found in the original novels. With no gimmicky villains or underwater car, it takes a bit to work backward how this character has evolved.

O’Halloran’s colors are in the Dynamite house-style for Bond. Muted tones, primarily blues and browns. Bright colors only for specific effect.

A note for those sensitive to ‘problematic material’ – this graphic novel series is attempting to be a very loyal adaptation of the Bond novels and so includes text and situations that would never make it to the page today. When the choice comes down to verisimilitude versus current sensibilities, the weight is firmly on the former. Vesper may have gained a grudging respect from this Ur-Bond, but he still believed firmly that “women were for recreation.”