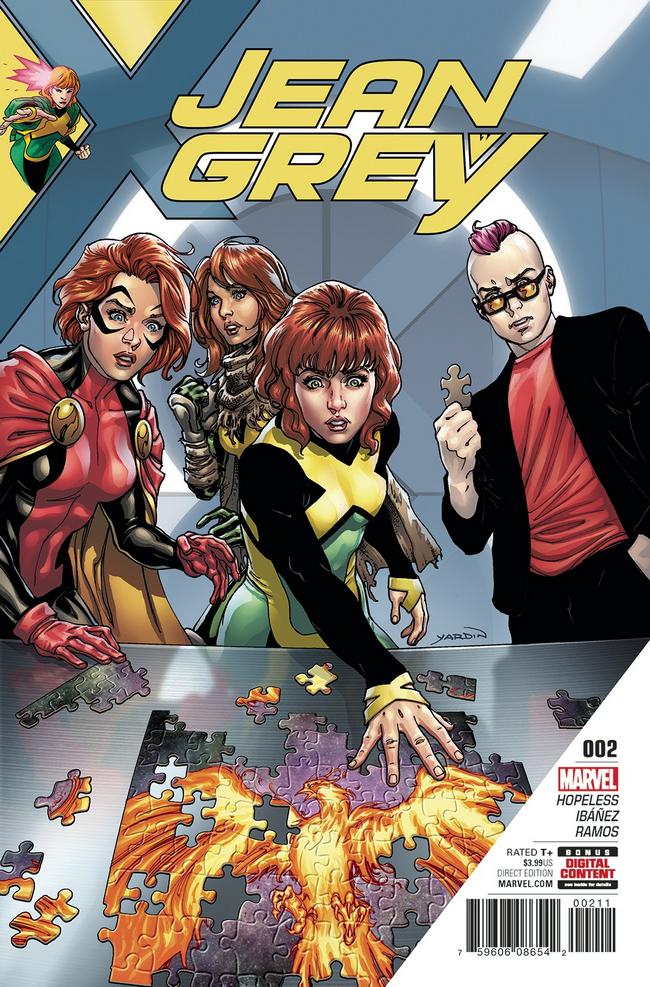 Who understands the Phoenix?

Jean is looking for answers, so she seeks out the previous avatars of the Phoenix. After seeing one of them is in trouble from the Reavers, she races to their aid, setting the stage for an intimate understanding of how people have been in contact with the cosmic creature. Even with more insight, Jean isn’t satisfied, and her next target promises to reveal something new about her dilemma.

Phoenix lore never ceases to amaze me, even if it’s been a continuity mess for the past five years (or, you know, forever). Jean Grey #2 almost takes us back to some of the core themes of the Phoenix: power, fear, destruction, and control. These qualities affect how the firebird manifests within each person it touches. Jean’s exploration of how the entity changes individuals speaks to why the Phoenix Force is not just some handy continuity catch-all; when done well, as Dennis Hopeless has demonstrated, it can be a curiously engaging nexus of power.

Quentin has to keep the fire of the Phoenix away from a mental shelter, while the legendary bird hovers over Peter on a farm. For Rachel, the Phoenix was a source of safety and security even she had to balance the inevitability of destruction, though for Hope it was an ever present pursuer. These brief moments connect a time-plucked Jean to the reality of the Phoenix: it doesn’t work the same for everyone. Hearkening back to Emma’s own struggle to contain the cosmic force in Phoenix: Endsong, we see that a connection to this much power does not mean wanton omniscience without recourse. Rather, it can mean intense agony.

Looking at how the Phoenix has touched each of the characters, there is still something hidden between the lines for Jean. In my last review I touched on how Jean and the Phoenix may be nearly one and the same. For all of Jean’s fear, I wonder if, as the series progresses, they may not be fully realized. Instead, what if her worry, her anxiety about connecting to the Phoenix is assuaged by the peace both beings feel when they’re attached to each other. Hopeless may appear to be setting up something that embraces the classic relationship between these two entities and recognizing that if anyone else holds this power, it is less likely to end well for them than for Jean.

In a change from the previous issue, Victor Ibanez isn’t as heavy in linework. Befitting the scenery from the middle of the issue on, the environment and each character appear as though they’ve been brushed with a sheen of dust. I find this effect humorous, as it works with Hope’s more desperado nature compared to her previous appearances. Ibanez makes her as gruff as her surroundings, and it excels not just because it’s a contrast with Hope in name and prior characterization, but also speaks to her differences with Jean and her naivete.

Ibanez creates easily distinguishable work in the latter half of the issue compared to the rest, constructing a messy and cluttered setting that blends well with psychic action and physical force. The fight with the Reavers is especially important for two reasons. For one, each of the characters is not lost to the myriad elements around them. Two, particularly in the scenes where Jean peers into the others’ minds, this junky fight is almost a shell around her as she takes in the relative calm of psychic exploration. Ibanez ended up visually crafting something reminiscent of Jean’s own departure to the current timeline: as someone innocent, she was suddenly thrust into the complicated history of our former Jean and her relationship with the Phoenix.

Jay David Ramos’ colors are more subdued in this issue, but the work with Chris Sotomayor allows action to take precedence. Bright colors can be distracting when movement is a key element of a panel, so Ramos and Sotomayor don’t take away from any part of Jean’s battle with the Reavers, and everything feels important. Eye catching hues do emerge, however, in some key spots, and pops of intensity show up where they need to be. For one, each display of psychic abilities looks remarkable, playing into the events around them. Two, the Cerebro scene is excellent because colors allow the reader to have a tangible representation of Jean’s abilities and how she uses the machine.

I can understand how the history of any Jean Grey can be confusing or frustrating, but this series has done the character and her continuity a service by more deeply exploring what it means to be an avatar of the Phoenix. From the ground up, the creative team uses technical skills which synthesize into a story taking one of the largest sources of nerd ire and making it feel like it can be unpacked. I’m beyond curious what the next issue is going to explore and I can’t say enough how happy it makes me to have this series in existence.