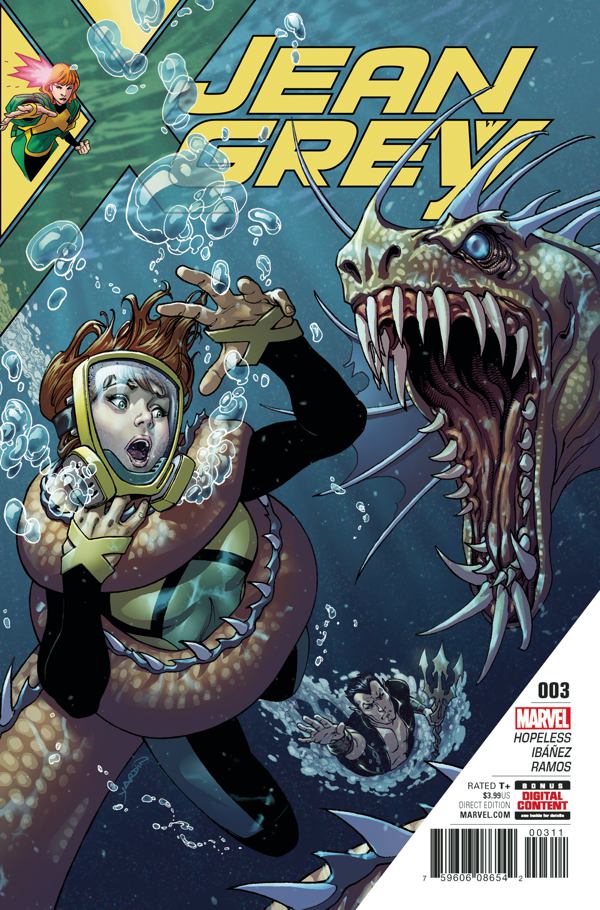 Just how did Namor handle the Phoenix?

Jean is still on her Phoenix-host world tour, finding herself in the ocean amidst creatures even Namor is unfamiliar with. Though he’s king of the seas, even his trademark condescension can’t save him from an immobilizing poison. Jean is forced to fend for herself, but not after seeing that Namor had a rougher time with the cosmic force than he let on and that he has surprisingly sage advice on what to do.

This third issue is incredibly tense and it has a nice narrative connection to Jean’s dilemma over the course of the series. Just as she is trying to avoid the Phoenix, find any way to keep her world intact, she also comes to understand that some fights have to be taken up and that, more importantly, she can be a warrior.

I appreciate how Jean Grey is giving us a new side to the Phoenix mythos. In particular, the connection between the Force and its host is rife with opportunities in storytelling. In particular, Dennis Hopeless’ use of Namor to explore more of the lore brings up interesting ideas. He feels that the “real” Jean couldn’t control the Phoenix and he hid his own struggles with the ethereal raptor. All of this is capped in the Sub-Mariner’s bravado and denial, and Hopeless’ exploration of these parts of Namor fit neatly within the story, providing a new narrative theme for the character and for this series.

Jean herself is frustrated throughout the story, manifest in quips and telekinesis. She is faced with a task that appears insurmountable and she is challenged to use her powers in different ways. Omega-level mutant though she may be, there are both literal and figurative things which push her to see the world differently. Hopeless ends on an intriguing note which bridges to the next story and gives Jean an altered outlook on how to find a solution that works for her, and I have my own suspicions that this may all culminate in something spectacular.

Victor Ibanez’s monstrous underwater landscape visually works for the narrative surrounding the series thus far. In her attempt to understand the monster looming in her mind, Jean ends up having to fight a literal monster that is not easily beaten with a couple of telekinetic bolts. Ibanez’s detail in the animals and the issue’s antagonist is wonderfully done, as are each of the action sequences. In particular, Jean’s use of her powers is creative and adaptive for her environment and Ibanez keeps the story interesting at every turn.

I have a fondness for greens and blues, so Jay David Ramos and Dono Sanchez-Almara had me right away. Even though poor, unfortunate sea creatures are becoming a snack at one point, this duo crafts an eerie calm on every page. There are only two places where warm colors are prominent, and both of those moments are a display of how contrast within a larger piece of work is enhanced when it is sparse. The first, Namor being attacked, highlights a turning point in his fight with the gigantic sea monster and brings full attention to his injury. The second is Jean’s telepathic trip through Namor’s mind and the violent oranges and reds mimic the revelation that occurs at this point in the story. Ramos and Sanchez-Almara evoke the right tones with every panel and I like the effect their work has on the story.

Jean Grey #3 further touches on a sense of inevitability about Jean and the Phoenix, though I also feel like it is opening doors for her to explore a different way of approaching her situation. The creative team adds a different kind of spark on every level and each artistic choice has a corresponding note in its narrative, from hulking monsters and firey panels to vital character interactions. I want to see what happens for Jean, and after this issue I am all the more curious.