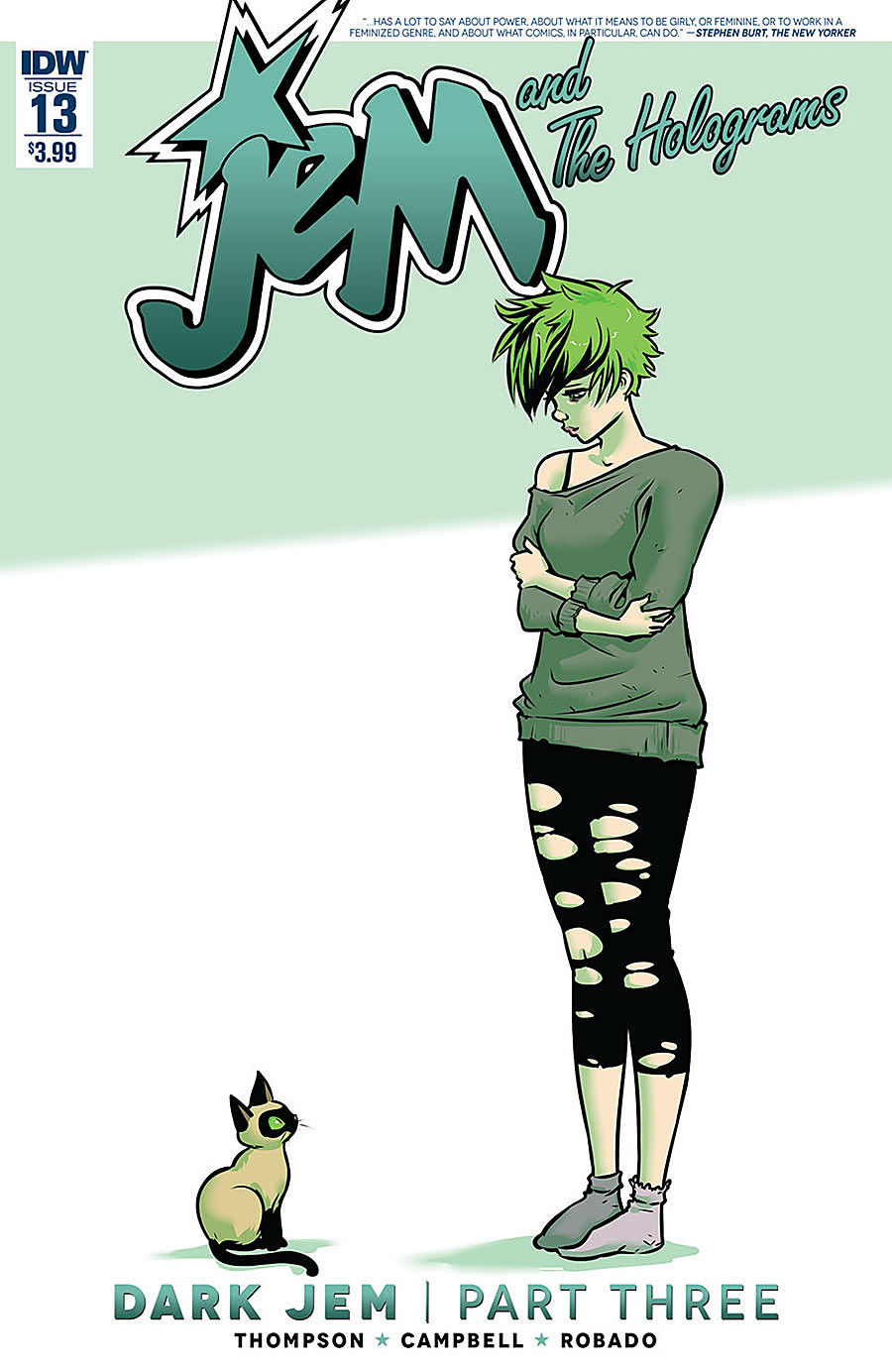 Jem bounces back from a well meaning, but rough edged, issue to deliver the strongest and most energetic entry since the series debut.

#13 opens with the focus firmly on Blaze’s onstage debut with a montage that cements her place in the line up in a beautiful cascade of The Misfits’ profiles. It’s a visual feast for the readers who have been eagerly anticipating the moment, but ironically the on page crowd — zonked out by the Dark Jem virus — are much less appreciative.

It’s long been my contention that the real stars of the series have been The Misfits, which suits me just fine since (as we all know) their songs are better. Pizzazz being sidelined has made room for Blaze to move into the spotlight and the Holograms getting zonked has brought Rio back into prominence, which is where much of the issue’s strength comes from.

All of the major characters have benefited from stronger and more nuanced portrayals relative to the cartoon, but Rio’s emergence has definitely been the most unexpected gift the comic has delivered so far. The last time Rio took center stage he was revealed to be the keeper of everyone’s secrets and the purest reflection of the soul of the series, and this issue is the payoff for what Kelly Thompson has described as being one of the most nagging issues from the cartoon.

The original dynamic between Jerrica and Rio, was questionable at best given that she dated Rio as herself while simultaneously leading him on as Jem, and we see that resolved here with Jerrica as Dark Jem forcing herself onto Rio for a kiss. The resulting trauma shatters the Dark Jem virus’ effect on her, making for a clean and visually stunning repudiation of what was probably the worst element of the cartoon. The closest thing I can come to a description of what Sophie Campbell and M. Victoria Robado do with it is a neon version of the triple layered mask sequence in Total Recall that transitions into an equally colorful psychotic break.

From there, the story moves into Rio and Stormer’s brother hatching a plot to free the rest of the Holograms from the virus in a sequence that recalls the love potion incident in the Valentine’s Special dialed down from that issue’s pure slapstick. Top to bottom, the issue is tightly focused, with the most dynamic and engaging page layouts of the whole series so far. It’s most evident in the crowded, overlapping panels that intercut The Misfits’ performance with Rio and Jerrica’s reconciliation and the fight to capture the other Holograms, but the size and spacing of the panels expand and contract to match the tone and timbre of each scene perfectly.

The confrontation between Dark Jem and Rio builds slowly with space to breathe that contracts and moves from clean geometric shapes to jagged, claustrophobic panels as Jerrica fights to break through and force a release of tension that spreads out across a whole page. When she recovers following Pizzazz’s interlude the paneling returns to big spaces with lots of breathing room but stays tight in on Jerrica as she comes around to the full truth of the situation.

In discussing the potential for the “Dark Jem” arc and what would spill out of the joint Misfits/Hologram tour in previous reviews, this is exactly what I was holding out for. It’s taken longer to get here than I’d have liked with notable bumps along the way, but Thompson and Campbell are taking full advantage of the potential of the Dark Jem concept to bring the characters with the strongest voices forward and confront long simmering issues.

What’s most intriguing about the issue is that the final page sets up the idea that they have to disconnect Synergy in order to stop the proliferation of the Dark Jem virus, which could finally bring Jerrica and the anxiety issues that drove her to rely on Synergy into the spotlight, one of the most novel innovations introduced in the debut issue.

The potential for an issue as punchy and effective as what we get here has been there since day one, and for the most part it’s only ever been a question of reigning in the slack and making consistently efficient use of the page. This one is all killer, no filler. Thompson and Campbell find room to advance Rio, break Jerrica and the rest of the Holograms out of the Dark Jem virus (for now), maintain Pizzazz’s presence in the narrative, and frame it all within a powerhouse performance by The Misfits. It’s a powerful and very welcome rebound from last issue’s stumbles. All that’s left now is to maintain the momentum built up here.