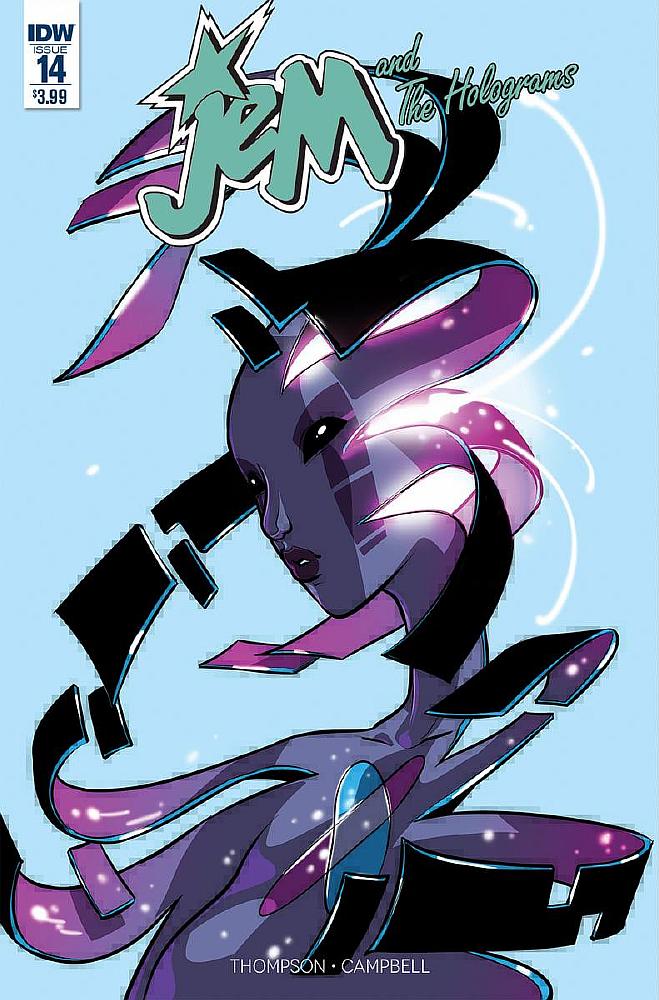 The Holograms have a decision to make: do they disconnect Synergy and save the world, or let her keep infecting fans and save their band? No matter what they decide, the women need to reconnect with their significant others and make good for what they did under Silica’s control. But will it leave them open to danger all over again as The Sickness debuts?

When a band is really gelling, you can hear it in the music. It’s more than the lyrics or the bass or the drums. It’s the perfect song that synthesizes into something larger than life, larger than individual efforts combined.

Jem and the Holograms is inarguably that perfect song.

Long past its freshman issues and screeching past any glimmer of sophomore slump (I’m not even sure it had one), Jem has fast become one of the strongest, most engaging titles on the market — and a testament to the creative collaboration of Kelly Thompson, Sophie Campbell, and M. Victoria Robado. Issue #14 in particular shows exactly what happens when you narrow in on every detail (but make it look effortless) and impeccably balance the emotional content with visual flair.

The two page sequence featuring Pizzazz’s long-awaited phone call, in particular, was crushing, and represents a microcosm of what this series really has accomplished above and beyond its source material.

The original television series, while unquestionably fun and close to my heart, featured very little nuance about who the good and bad guys were, and barely took the time to distinguish the Holograms from one another, outside of Jem and Jerrica. In fact, even there, we got a much better sense of who the Misfits were independent of each other than the Holograms.

Here, that balance is restored, but not by subsuming the Misfits in any way. In fact, Thompson and Campbell have elevated every character — individually — to such a degree that its hard to imagine ever having to distinguish them primarily by hair color and not by voice.

Pizzazz has an emotional journey that’s clear and distinct from Stormer’s and Blaze’s and any one of the other members of either band. And every one of them compelling and strongly characterized women. I adore that each one sought out their boyfriends (as the case may be) and enacted the bold “Say Anything” style move in their own way — Asha catching her boy as he jumped out a window or Shana shutting her boyfriend up by kissing him. These women are driven and unique and… well… real women.

And that comes to play heavily in Campbell’s renderings as well. One thing I’ve noticed in this issue in particular (but I wouldn’t be surprised if you told me it was there all along) is how each character has a distinctly different nose that uniquely their own. Silly thing to notice, maybe. But it creates this individuality among the characters that just echoes out into their interior voices, their body language, and yes, their hairstyles.

The issue as a whole is beautifully paced, with the arrival of the Sickness taking the pages into darker and more tragically beautiful territory. I really do adore how the page almost drips down, both in Campbell’s black inky swirls (mirroring Silica’s hair tendrils) and Robado’s smooth, luscious gradients of color cascading across panels.

We may be facing a genuine villain by the end of Jem and the Holograms #14, but if Thompson and Campbell have shown us anything, it’s that there are no two-dimensional characters in this world. Jerrica, Pizzazz, Blaze, Stormer, Kimber — all so unique and all so compelling. This world is rich with color and personality and spirit, and it’s a song that I hope never stops playing.