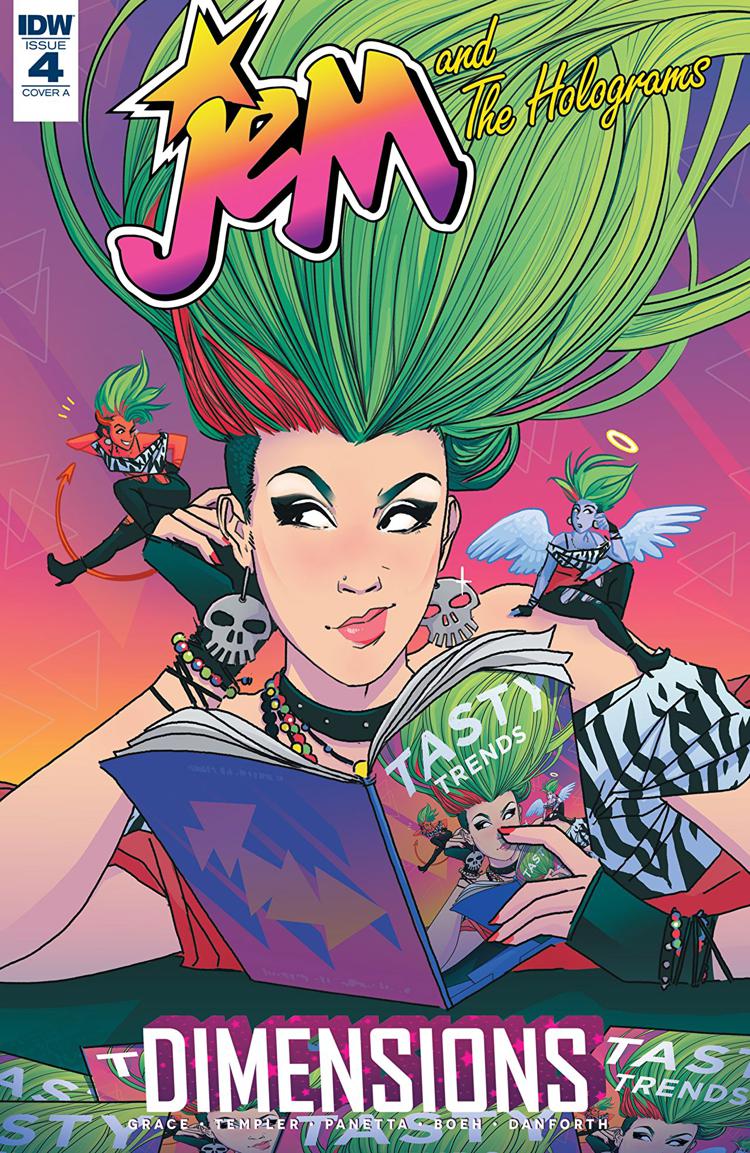 “Tasty”
The first story in this Misfits-centric issue is a cautionary tale of how easily social media can be used to spin something into something it isn’t.

While I love Sina Grace’s work on Marvel’s Iceman, I’m not sure he was a good fit for Jem. The overall idea and the dialogue were both great, but it rang false for the shrewd businesswoman Pizzazz to be so easily duped, and the Misfits should have had her back once she’d explained what had happened. This takes place before the Infinite storyline, and by that point both the audience and the rest of the band know that Pizzazz is a mama wolf when it comes to her bandmates. She’ll do anything for success, but not at the Misfits’ expense, and they know that.

Hannah Templer’s art here fits the Misfits aesthetic perfectly. It’s loud, brash and slightly exaggerated, just like the band. She uses a lot of bright colors and flowing lines that would actually be a great template for a cartoon reboot style sheet. Not that I’m dropping any hints, WHOEVER OWNS THE CARTOON LICENSE, COUGH, COUGH.

(Also, I want Roxy’s shirt. Not even remotely joking.)

I have to note that there might have been some kind of editorial error in this story. Page 11 (going by Comixology’s page numbering) feels like it’s an earlier draft of exactly what happened on page 8, and it’s completely out of place where it is in the story. Hopefully they excise it in the trade collection.

A classic “Seriously, why haven’t the Misfits been arrested for this yet?” story that hearkens back to their more aggressive, ’80s cartoon versions.

Once again we see one of social media’s idiosyncracies acting as a backdrop, and look, I really, deeply, do not like emojis. At all. In a “get off my lawn” way. Somehow, Kevin Panetta still managed to make me enjoy the over-the-top silliness of the Misfits being their usual “they must have great lawyers” selves. From being hellbent on upstaging the Holograms both literally and figuratively, to the raw jealousy and annoyance on display, Panetta crafts a story that makes me feel like these are the characters who absolutely kidnapped Kimber and left her tied up inside an erupting volcano one time.

Oh, you sweet, summer children. You don’t think I’m joking, do you?

Abby Boeh and Heather Danforth’s art is another good example of what a cartoon reboot could look like. The inking linework is a bit on the heavy side, but it suits the look. The Holograms are drawn with softer, rounder lines, whereas the Misfits tend to favor sharper angles. The colors lean heavily on pinks and blues, but it’s not oversaturated with them. Finally, Shawn Lee gets to cut loose a bit on the lettering, with logos everywhere and new styles for the sung lyrics.

Overall, while I still prefer longer storylines, Jem and the Holograms: Dimensions has been a great anthology series which brings back the fun and feel of the old cartoon. I’m sad to see it ending, and IDW has done great things with this license. Thirty years and change down the line, and I’m still proud to call myself a Jem Girl.