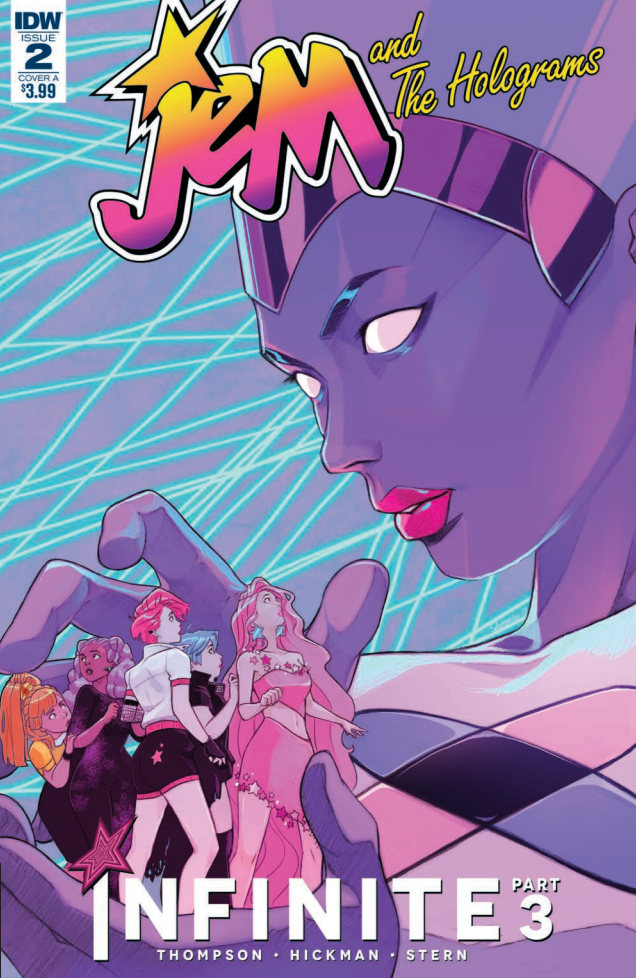 Have you ever watched the Jem cartoon? It’s on Netflix. It’s amazing because it is absolutely bonkers. If you did a shot for every time the Misfits should have been arrested for attempted murder, you’d be dead of alcohol poisoning halfway through Season One.

The thing about Jem, though, is that it really buried the lede. A guy leaves his daughter a sentient AI with the technology to project hard-light holograms at will, and she uses it to become a pop music singer?

Like I said, absolutely bonkers. Fortunately, Kelly Thompson has shepherded Jem into the 21st century with a fantastic sci-fi sensibility. In Jem And The Holograms: Infinite #2*, we continue exploring the concept of “What if Synergy was used for evil?” which was introduced in the Dark Jem storyline from the initial run of Jem comics. On an alternate reality, Eric Raymond has the Synergy tech, and we see him using it to weed out “undesirables” from Jemworld (apologies to Princess Amethyst). However, it seems that Eric has a mysterious partner with an even darker goal in mind.

The emotional beats come at us hard during Jerrica and her sisters’ reunion with the “Earth-2” version of their father Emmett. The single, silent panel of the group hug really conveys the pain of loss the girls have been carrying since their father’s death.

It’s worth noting the coloring choices here. Color has always been an important component in the Jem comics. The characters are celebrity musicians and should be vibrant and bold by necessity. But the background colors here demonstrate excellent choices by Sarah Stern – warm and light tones in Jemworld proper contrast with darker shading in Eric’s office, and muted, somber shades of blue/green/purple in Emmett’s apartment to illustrate the coldness of solitude.

While Sophie Campbell will always be the premier Jem artist for me, Jen Hickman is definitely a worthy replacement, unleashing her own wild creativity in the designs of Jemworld and the over-the-top fashions of that dimension. After all, a hologram can look any way you want it to and isn’t limited by physical materials, so designers can let loose. Shawn Lee’s lettering and sound effects neatly complement the sci-fi cartoon feel of the series.

Overall, the storyline is an awesome reimagining of the cartoon, and Jem really thrives as a concept when its sci-fi leanings are explored in greater depth. Jemworld is inarguably beautiful, but that beauty and artifice has a sinister underpinning, and it’s a great hook that leaves me instantly needing more.

*A note to the reader: the reason this is issue #2 while the storyline is labeled Pt. 3 is because IDW publishes two “Infinite” titles, alternating between Jem and the Misfits. So the next chapter will be THE MISFITS: INFINITE #2 and so on. Yes, it’s confusing.