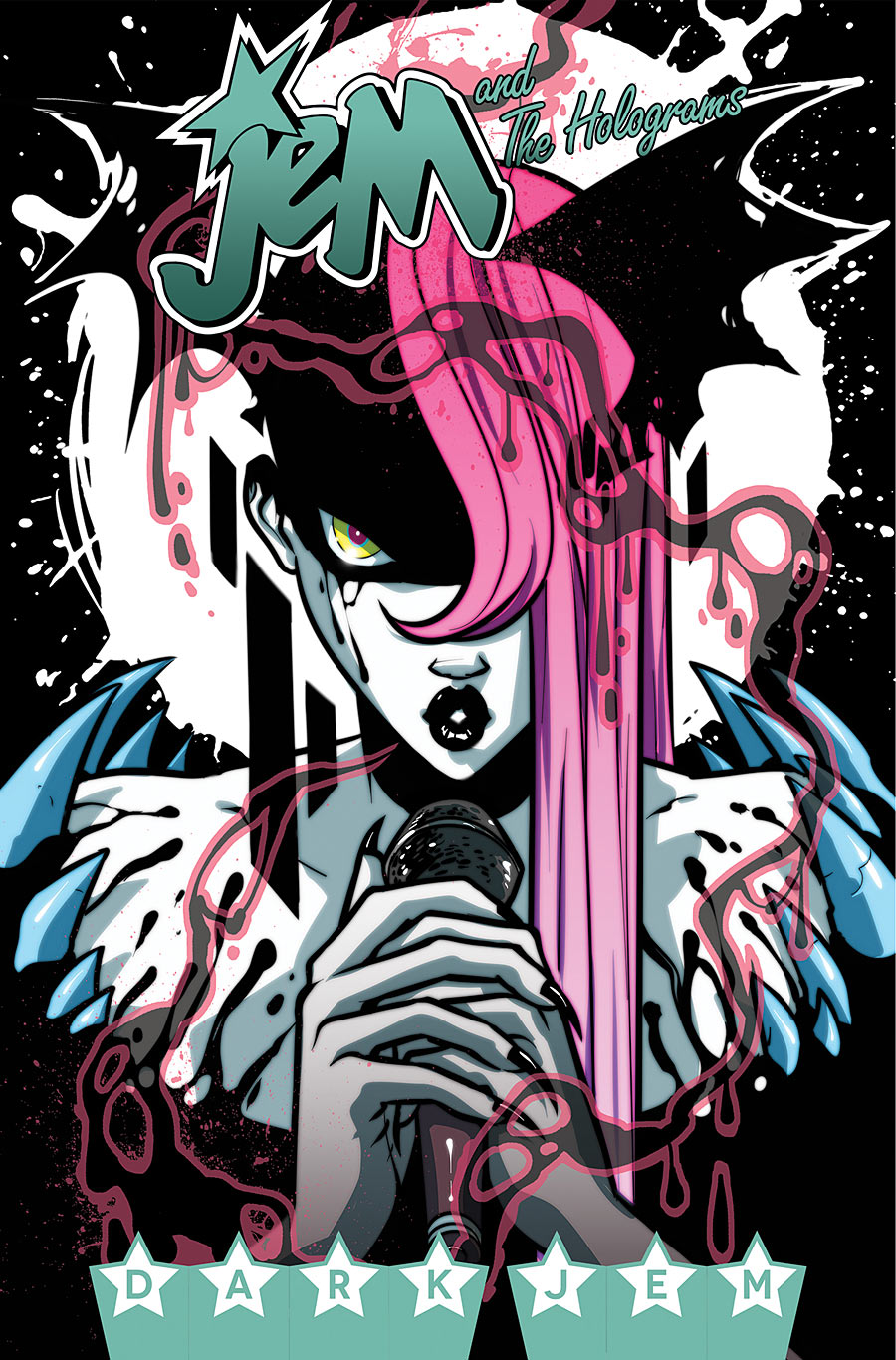 The bands are at a crossroads. The Misfits are without their lead singer, Pizzazz, in the aftermath of a car accident. The Holograms are seemingly on the rise, but there’s something deep inside of Synergy that’s about to throw a wrench into their futures. As the band goes “dark,” will Jerrica and her sisters be able to come up with a solution that doesn’t end Jem and the Holograms as they know it?

Where do I even begin?

I mean, seriously. For a story arc predicated on the darkening of Jem and the Holograms’ trademark lightness and fun, Kelly Thompson and Sophie Campbell certainly know how to make sure the heart shines through on every single page.

It’s a set-up that easily could have gone the way nearly every comic of the past twenty-five years has gone when posed with an opportunity to “go dark.” But what the creative team has done here, both before and after the Holograms’ infection from Synergy’s aberrant virus (cleverly dubbed “Silica”), is shown just how powerful the positivity and compassion of the characters are. This book isn’t about music. It’s not about fashion or fame, glamour or glitter.

It’s about friendship, family, and love. And that comes through in every single page.

And it does so in the most queer-positive terms of any mainstream title in comics today. From Kimber’s relationship with Stormer (which is so tender and real it hurts at times) to Blaze’s coming out moment with the Misfits, Campell and Thompson have woven the art and script into a series of beautifully touching moments that grab you, precisely because they feel so honest and real.

Some tweaking has been done for the trade edition of chapter 2 that resolves a ton of criticism many readers had for Blaze’s self-rationalizations before telling the Misfits that she is trans. In fact, the new dialogue is so well-constructed precisely because it refocuses the concern on Blaze’s own security, safety, and self-care, not on the comfort, acceptance, or rejection of her cis colleagues. To wit,

Blaze: How do I tell them I’m trans?

Clash: Well, you don’t have to tell them.

Blaze: No… I think I want to tell them… We’ll be on the road in close quarters… I just… I don’t think I’ll feel safe unless they know. I’ll be under so much pressure already. I can’t be worried all the time how they’ll react if they find out…

Blaze: I think… It’s better for me if they just know now… but… what if…

And so it goes. It’s the third such adjustment in a trade volume for dialogue involving trans issues in the past year (following Airboy and the Batgirl of Burnside), and it’s probably the most thoughtful. Not every commenter agreed that the original dialogue was problematic, but there’s so much emotion and richness in this revision that it feels less like a patch and more like a blossoming of something better. And no matter what, it says something exceptional about the creators involved: their care and dedication to these characters is simply stunning.

That becomes obvious in more than just Blaze, of course, as Pizzazz emerges as the central figure for the entire volume, despite running in the background for most of the issues. In fact, I would consider it an accomplishment alone that Campbell and Thompson have been able to get me to fall in love with Pizzazz as I have — much less turn her into the literal smartest (and most emotionally vulnerable) person in the room by the end of the “Dark Jem” saga.

Pizzazz’s quiet moments throughout this arc — from her crouch against the door to that pained one-sided telephone conversation with her father — are so raw and moving, it actually highlights something that wasn’t clear to me until now: the irony of titling a book after a hologram when it’s populated with such deep and thoroughly interesting women.

Because even without Silica’s darkening effect, that seemingly removes the emotional heart of the characters exposed, Jem is never more than a shell in these pages. A conceit. So when Jerrica succeeds in breaking free, it’s a real triumph — more so because of the conflict we see in her that led to the Jem persona in the first place. But Jem is never fleshed out, never real in any sense. And that’s exactly how it should be.

I could go on and describe 100 other things this volume is doing right — heck, that the entire run to date has excelled at. But here’s the skinny: Campbell’s art is absolutely moving and exquisite in its simplicity and embracing of reality. The women in this book are as fully formed and unique physically as they are emotionally, and that effort is manifest on every single page.

Robado’s colors lend a sense of drama to every single page, and even when things go dark, she finds a way to keep the book’s palette its brightest and most engaging yet. There is never a moment where my attention lulls or my interest in the characters dims and so much of that is due to the continuity Robado provides.

Thompson’s scripting, along with her grasp on what makes each woman uniquely tick, is unparalleled — an exceptionally special accomplishment given the size of the cast. And her ability to redirect my care to the places I least expect it is one of the biggest joys in reading this book.

Of any arc to date, this is the one I cherish the most, because it gave me so much of what I want from comics: characters I can invest in, a story that surprises and delights, and a feeling throughout that care and compassion come second nature to the creative team. Jem and the Holograms is going to be so much less for Sophie Campbell’s departure post this volume, so savor this chance to take it all in and love every last note. Because this volume is a master class in the true strength, wisdom, and sophistication these women are bringing to comics, on the page and off. We’re damn lucky to have it in our hands.